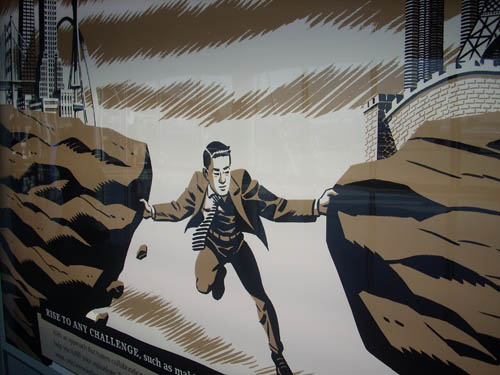 You won’t likely see regular posts from me during the show but I have a few hours to kill before the show starts.

You won’t likely see regular posts from me during the show but I have a few hours to kill before the show starts.

I giant Michael Cho advertisement in the Chicago airport was a nice surprise. We’ll be publishing a book of his Toronto back alley drawings in the near future.

Chris and I got in early and setup yesterday. Then he set off to hang with his wife and kids while I finished up.

Same old Fanta crew (Mike and Zuniga) setting up the same old booth in the same old spot. Lots of nice new books though. I’m just tired of their faces.

Have I mentioned that the convention center is so big that some of the workers ride bikes around during setup?

Hey, Eric Nakamura was there setting up and we got a rare chance to hang out. It was good to see and TALK to Eric for a change. {I do not understand what the hell is going on on his t-shirt at all.}

Michelle Borok (careful, do not show your sensitive side, she will pounce) and Eric at dinner at some Mexican restaurant whose name I forget–Rachel’s, Raul’s, Rancho’s.

Oh, and I just had lunch with the great Mimi Pond and stuck her with the parking fee (Sorry, Mimi). I also forgot to take a picture. If you don’t know who she is, google her. She is fascinating besides being a great cartoonist.