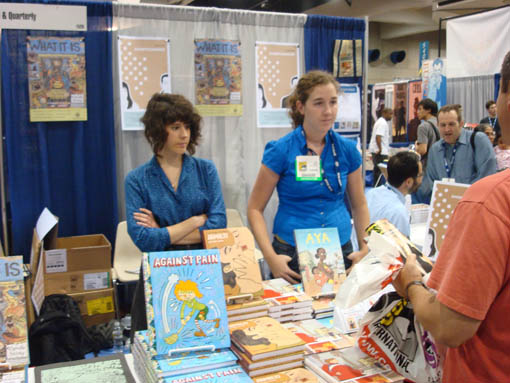 What could Rebecca and Alison be looking at? Why so glum?

What could Rebecca and Alison be looking at? Why so glum?

Aah, that explains it. Look at that guy on the left hustle to get “’round front.”

Special Guest and New York Times magazine cartoonist Rutu Modan arrives at the booth. She’s got a new book out– Jamilti, a collection of her short stories.

Look, I’m not going to lie to you. I think Steam Punk is awesome. The only thing that could make this guy cooler is if he was sitting in an ornithopter. Made of brass.

Dear Traie, We got your Buck Rogers gun. It’s smaller than we thought.

Look, it’s Jamie’s first con so cut him some slack on his love of snapping costume pics.

Jamie wants to call this exit con crush “mild in the streets” because everyone is so well behaved. He’s nostalgic for the downtown Montreal riot following the cancellation of an Exploited concert.