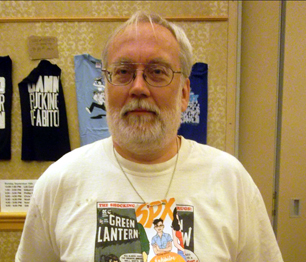 By now this sentiment has been expressed by many people, but it’s worth noting again here: Kim Thompson was one of the most important and influential figures in modern comics.

By now this sentiment has been expressed by many people, but it’s worth noting again here: Kim Thompson was one of the most important and influential figures in modern comics. Without the pioneering work that both he and Gary Groth did at Fantagraphics there likely wouldn’t be much of an alternative comics movement to speak of today. If Kim and Gary only worked on The Comics Journal for 35 years that alone would have been a formidable accomplishment, as that magazine was instrumental in shaping the first couple of decades of the modern graphic novel. But they also, of course, published their own line of comics, and in doing so they created a market for these kinds of comics where very little of the sort existed before.

I think I may have met Kim perhaps a dozen times over the past 24 or so years, although I still vividly remember that one of my first phone calls in the business was to him. It was late 1989 and I called Kim to place a listing for the first issue of Drawn & Quarterly in the sister publication to The Comics Journal that they ran at the time, Amazing Heroes. I remember being nervous, and I couldn’t believe that I was actually speaking to Kim Thompson.

If I can pick one thing that stands out about Kim, it would be the dedication he had in regard to ushering into existence in all of his numerous projects. In just the past five years or so, he has seemingly worked on dozens of translation projects, undeterred by market expectations or if the author was known or unknown. From what I can tell, if Kim strongly believed in the merit of a cartoonist’s work that would be the only criteria in regards to whether or not a book was published. Kim’s single-minded determination and enthusiasm was admirable and is the reason why we are all here today. And it’s why we get to read so many volumes of great cartoonists like Jason, Tardi, Joost Swarte, and Thomas Ott.

Helge Dascher has worked as a translator in comics for nearly two decades, and in recent years she has worked with Kim (by this point Kim had taken in so many projects that he needed help in staying on top of it all). Helge loved working with Kim, and she wrote the following:

In addition to English, Kim spoke Norwegian, Swedish, Danish, German, French, Italian and Spanish, and he translated from many of those languages. He liked to do voices: tough-guy noir, Kaurismaki-Jarmusch deadpan. Puns—always a challenge in translation—came easily to him. He really loved words—for their etymology, their sound, their connotations, the way they look on a page. He brought many European comic greats into the English language, translating mostly, as he told it, “after dinner weekdays, or in chunks on weekends.” That enthusiasm made working with him a real privilege. He was an incredibly thoughtful and generous editor, inexhaustibly committed to getting things right, and the list of projects ahead always seemed endless.

And D+Q Creative Director Tom Devlin and founder of the influential alt comics publisher Highwater Books has this to say:

Kim Thompson’s legacy is huge. For thirty-five years, he was the co-publisher of Fantagraphics—the greatest comics publishing house of all time. And that publishing house is arguably the most important publishing house in the tail-end of the 20th century and beyond. I hope his contribution is remembered on that scale. Not just in the comics world but in the entire publishing world.

For me, personally, Kim was a model publisher in his dedication to projects he believed in. At some point, I referred to these as “crazy Kim projects” because they were so clearly outside of what the North American market demanded. Kim published comics he liked whether they were in- or out-of-fashion. And often they were out-of-fashion. Funny animal comics during the flowering of the second wave of underground cartoonists? Classic European comics during the serious graphic novel era? Sure, why not. Kim’s approach gave me one of the most important lessons ever when I started publishing: Just publish stuff you love above all else. If you think it’s worth reading then it is. Get those comics out there for others to see what you see.