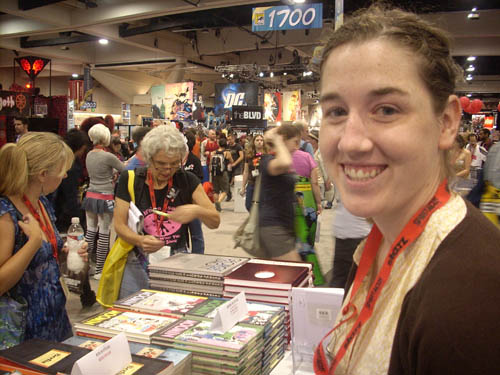 I know I’m way behind on this but I gotta see this post through. I thought SDCC this year was just fine. We did about what we expected sales-wise based on convention debuts and special guests and the fact that we’re in a recession. Many parts of the convention were run better than ever. In fact, this might have been the most hassle free Comic-Con ever for us. Anyways, here’s the usual collection of costume photos and snarky comments.

Alison Naturale, our convention temp, early on in the Con, still smiling.

I’ve got to give this guy a hand because this is actually a comics-related costume.

Later, I saw more people wearing this “fox tie” so maybe it was a give-away. At the time, I thought it was just a kind of “swingers i. d.”

Later, Pete Maresca would win an Eisner and give a pretty nice speech. Actually, one of the best. Here he is holding up one of his new books, The Upside Downs by Gustave Verbeek. Really beautiful stuff, beautifully presented.

Here is why this is funny–a blue guy is holding court while leaning on a blue recycling bin. I’m increasingly unable to identify the costumes these days (it used to just be either Green Lantern or bondage club clothes during the daytime) but I’m told this might be Little Mermaid related.

Alright, Tom Spurgeon already stole this joke from me but seriously this was the first day of the show and this booth was empty. Wasn’t this a really popular show three months ago? (The sign says “Battlestar Fan Club.”)

Somebody just made fun of Joe Matt.

For me, this was my biggest celebrity sighting. It must have been the real Brobee, right? The costume is just too good. And look, Brobee is a fan of Red Colored Elegy.

Prithee, Brave Sirrah, have you the most recent broadcast of the Sherlock Holmes Tesla-cylinder on your teak Bhoom Bhox?

I think my favorite thing about all comics and sci-fi related subgroups is that you can always work in a bustier.

Seth and Jason Lutes signing away.

Here’s a detail of that crazy 1576 character painting by Alison’s old RISD pal.

All I’m saying is that I buy Tom Spurgeon lots of beer every convention.

I can’t even remember the name of this bar. I feel like it was something “The Velvet Crab” or “The Hot Box” or something. Either way, us older folks are still looking for the replacement for the Picadilly.

What. WHAT?!? I never thought I would say that about Pikachu either.

Seth and Bob signing away. I’m happy to say that Bob had the sleeper hit of the show for us.

“Once again, Comic-Con has underestimated the popularity of Steam-Punk.”

The important thing when exhibiting at Comic-Con is to remember that you can reach diverse audiences.

Late night Friday, three Eisners (technically two of these do not below to D+Q but we accepted for the non-attending Chris Ware. The third belongs to Lynda Barry, of course.

Post-Eisner. Seth and the Opposite of Seth chat. Jeffery Brown stands right.

Late late night Friday post-Eisner, I ended up in a hip-hop video or so it seems whenever it’s past midnight and you’re hanging out with the Giant Robot crew. I swear to god this photo was not staged.

Items I bought at SDCC: some pink Snoopy handlebar caps that almost certainly got someone fired at the Peanuts licensing division, a blushing algae doll, and some Dell kids/teen comics.

More Jason and Seth at the Eisners.

Chris thanks Elton John for an Eisner.

On Saturday, Chris and Seth both received Inkpots at Seth’s excellent slide show. It was a special surprise for both of them and I have to say that it is probably the single handsomest and appropriate award for cartoonists. It’s really nice.

Michelle from GR and our new friend “Scrappers.” I like to “party” with them.

Anne Ishii. Whisky. Keep your Eisners away from this woman.

We have the best fans because this one guy told me about a Moomin bank for sale at the other end of the convention center, took me there, and helped me skip the Pushead-signing line to get the last available copy.

Again, no idea who these guys are but I think it’s fair to say we were all pretty pleased about this. Jessica Campbell sports wings.

Jessica keeps an eye on Chris Ware’s Eisners. Someone actually wondered if he could buy one.

Last day of the show. Peter!!

The Unquotable Trump Supports the ACLU

When R. Sikoryak’s The Unquotable Trump was published by Drawn & Quarterly in 2017, 25% of net proceeds were earmarked for…