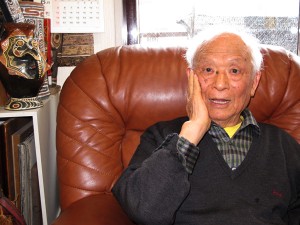 Rare interview with Shigeru Mizuki on PRI’s THE WORLD!

Just typing this blog post gives me goosebumps that thanks to Marco Werman at PRI’s THE WORLD, we have a landmark once in a lifetime in English peek at a great cartooning master.

Just typing this blog post gives me goosebumps that thanks to Marco Werman at PRI’s THE WORLD, we have a landmark once in a lifetime in English peek at a great cartooning master.

This past Friday, Marco Werman aired his interview with legendary cartoonist, Shigeru Mizuki. Read the transcript or listen to the interview or since Werman traveled to Japan and interviewed Mizuki in person watch the interview:

It’s a great interview that covers all of what makes Mizuki such an incredible force in the medium. Any review that compares ONWARD to Sergeant Rock and decides: “The war comics of Shigeru Mizuki are very different. They’re more like poetry meets reality” is going to be a good one. The interview also goes on to place ONWARD in the context of contemporary war stories: “Think Terrence Malick’s 1998 war movie “The Thin Red Line” and the philosophy of war expressed by the hard-nosed Sgt. Walsh played by Sean Penn. Remember Sgt. Walsh berating the lower ranking Private Witt for going AWOL?” The interview also features award-winning manga expert Fred Schodt and delves into what Mizuki thinks of manga, and the video includes Mizuki discussing yokai.

Here are some more reviews of ONWARD TOWARDS OUR NOBLE DEATHS, and mark your calendars everyone for Spring 2012’s release of NONNONBA.

“Onward Towards Our Noble Deaths” portrays the human side of the Japanese soldier and his suffering, much like “Letters From Iwo Jima” did. Unlike “Letters,” “Onwards” is written in a startling comic form by a man who lived through the experience. Now available in English, both history buffs and manga fans alike are sure to find something new and thought-provoking in its pages.”–JAPAN TODAY

“One striking feature of Mizuki’s memoir is how it demystifies the Japanese military experience and shows the universality of the soldier’s life. These men, like soldiers everywhere, grumble about their superiors, sing bawdy bonding songs, and wish they could go home.”–THE MONTREAL GAZETTE

“The author is aiming here for a depth and breadth of story that few other graphic artists attempt. The fact that the book dates from the ’70s-a time when American comics were concerned with Spider-Man and The Justice League, and even “underground” comix emphasized small-scale stories-makes Mizuki’s ambition all the more remarkable.”–POPMATTERS

“Mizuki illustrates the soldiers in a “cartoony” style, but uses a detailed, realistic style for his backgrounds and landscape panels, capturing the beauty and desolation of the remote locate.”–PUBLISHERS WEEKLY

“At its essence, Onward Towards Our Noble Deaths is a story that anyone can understand, a story of both the nobility of human spirit and the absurdity of war.”–GRAPHIC NOVEL REPORTER

“This is a war story that gives ready access to American readers who know little of Japanese foot soldiers’ experiences during World War II; the medium of classic manga is just right for the content.”–SCHOOL LIBRARY JOURNAL

“The black-and-white illustrations create a stirring duality: cartoon-drawn characters set against a realistic and highly detailed background. In addition, Mizuki builds suspense as the enemy is always advancing but never quite clearly depicted.”–LIBRARY JOURNAL

“Now..the book seems more invaluable than ever. In popular culture, the Japanese perspective on the war has largely been defined by the West. But it’s going to be hard to picture the Imperial Army as robotic fanatics after reading Onward, with its mass of rounded faces all yearning for an extra spoonful of rice and one last shot at getting laid before they charge into the abyss.”–THE ONION AV CLUB

“Mizuki’s artwork in this book is a mix of styles. His realistic depictions of Rabaul’s lush tropical vegetation and his stippled images of gigantic cloud formations must have taken many hours of work per frame. But the characters who populate these scenes are drawn in a very simple, undetailed and cartoony way.This technique is effective in the case of Maj. Tadokoro, who makes the decision for the suicide charge. His walleyed stare emphasizes that he is out of touch with reality. He seems to think of himself more as a figure from an epic poem than as a man responsible for the lives of fellow humans in the real world.”–DAILY YOMIURI

“This book is excellent…Mizuki threads a little comedy, absurdism, theatrical speeches about the honor of death, through Onward Towards Our Noble Deaths, preventing it from becoming a moribund book. It’s still quite dark, and tragic, but mostly, it’s a reminder that for every hero found in war, there are thousands of senseless losses.”–NEWSARAMA

“For those fascinated by military history and WWII in particular, Onward Towards Our Noble Deaths provides a penetrating look at the suffering and absurd injustice inflicted on Japanese soldiers by their very own army.”–COMIC BOOK RESOURCES

“Balltastically, Mizuki recovered, re-teaching himself how to doodle with his non-dominant arm and going on to become one of Japan’s preeminent cartoonists and folktale-tellers. Biography, short form: Mizuki is a badass.”–BOSTON DIG

“Soldiers were told they could either trudge deeper beyond enemy lines in what were essentially suicide missions or return home and face execution. Mizuki tackles this topic with the wherewithal of someone who was deeply involved and understood the consequences on both ends.”–DENVER WESTWORD

“The fact that Onwards Towards Our Noble Deaths provides just a small taste of Shigeru Mizuki’s sixty-year manga career should not take away from its ability to stand on its own. It is an epic portrait of a soldier during one of the most brutal battles of World War II. This translation (and its stunning gilded cover) is a welcome addition to the collection of any graphic-novel enthusiast.”–WORDS WITHOUT BORDERS

“Mizuki blends a jarring style of highly realistic backgrounds…with caricatured, cartoon-ish figures. The message is instantly clear: the soldiers… are anything but human, in fact they are even less than the surrounding foliage, the threatening war planes, the waiting crows. Not until these bodies are blown up, dismembered, scattered in pieces do they finally become “real.” Smithosonian’s BOOKDRAGON

“Mizuki manages to show the epiphanies of the men—and even more so the officers—as it dawns on them that they have options. Those memories forgotten in the desperation of battle—the scents of home, the taste of anpan, their first blushing experiences with a woman, their family—now bring the reality of their situation home.”–METROPOLIS

“the real value of Mizuki’s book is to show us the human faces on the other side of the battlefield. The Japanese have doubts and fears about war, too. By the end, many of the Japanese soldiers were acutely aware they were fighting a losing battle, but they had no way out. The book puts to shame the horrendous propaganda and stereotypes we used during World War II.”–MANGA WORTH READING