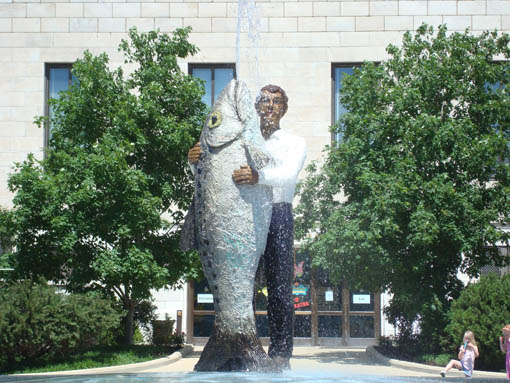 Catching up with some recent outings here and just like BEA I didn’t go and I’m not giving Salomon blogging privileges so stop writing already (This means you, Jason Miles). Jamie and Chris went to Chicago for Printers Row–an outdoor book festival that was going on the same weekend as MoCCA Art Festival. Chicago–The Windy City, The City of Big Shoulders, The City of the Fish Hugging Man!

The iconic pile of books pre-show. Seriously, if you do cons, this image is seared into your mind. Are the boxes damaged? Are they all there? “Hey, let’s just put some of these boxes on their side because who’s gonna stop us.” The day started off nice enough in sunny Chicago.

Chris Ware and Ivan Brunetti sign at the D+Q booth. Reports are that there were “mad crowds” and that the “peeps were buggin'” when they saw Chris and Ivan.

Ivan apologizes to a fan. He actually grabbed the book out of his hands and signed it before the fan could point out that he was there to meet “that guy who does the comic about Germany.”

Back at the booth, Chris Ware signs a postcard with a man hugging a fish.

“This one is about incest. He he. Sniff.”

And then the skies opened up and ruined a perfectly nice day.

This is when Chris and Jamie left and saw a movie.

Jamie stayed behind to do some sight seeing. What’s he reflected in?

And a trip to “North America’s Second Best Comic Shop.” Pictured, owner Eric Kirsammer and the guy who loaned Jamie a twenty so he could get some lunch but he still forgot his name.

Eric Thornton. Pretending to order more copies of What It Is.

A trip to Intuit: The Center for Intuitive and Outsider Art and a look at the Chris Hipkiss exhibit.

A detail from a piece that might be titled “We’ve Fallen in Love with Poppies.”

Lynda shops at Quimbys. I’m pretty sure it’s Quimbys. It’s been a while since I was last there.

Lynda on stage at The Hideout.

The line for Lynda’s one-on-one chat and doodle.