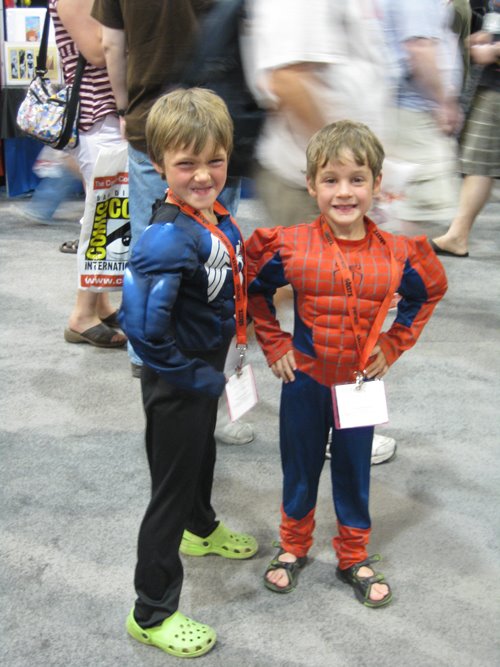 Ladies and gents, Elliot and Charles Oliveros! Chris and the whole Oliveros/Lesenko clan stopped by on preview night to have a look around. I assume that the footwear on their versions of Venom and Spiderman is non-canonical.

Ladies and gents, Elliot and Charles Oliveros! Chris and the whole Oliveros/Lesenko clan stopped by on preview night to have a look around. I assume that the footwear on their versions of Venom and Spiderman is non-canonical.

THIS GUY IS AWESOME

Check out this little guy! We were all commenting on his jumper and his dad said “Did you hear that? They like your suit, Tiberius.” Errrr… maybe a little too far.

Jason Lutes, we LOVE you!

THE CLASH OF TECHNOLOGY

The chief peddles books at the booth.

Later, when he accepts Chris Ware’s Eisner for “Best Letterer,” we discover the secret to his success: NEIL GAIMAN.

Eric Reynolds accepts an Eisner on behalf of Jason; Seth and Jason Lutes make sure that no one “messes” with him.

Alison’s friend made this painting with over 1500 cartoon characters on it and spent all weekend outside showing it to interested con-goers. (He did not have a badge and thusly could not get in.) He offered us an explanation of the work…

He was looking pretty sunburnt by the end of the con.

Joe Matt assures Chris that he is working on the next book; Steven Weissman and Jason Lutes laugh in the background.

OK. This is super cute. A DIY storm-trooper in gumboots, with a yoda backpack, lunch box holsters and a kid attached to his ankle? This makes me kind of love Comic-Con.

Look at Lynda Barry’s “Best Reality-Based Work” Eisner glisten in the neon lights! We are all still very excited!!

Alison won the guinea toss and got to go to the “Steam-Punk Meet-Up.” However, Comic-Con severely underestimated its popularity and hundreds of people were denied entry, including our delegate.

Not all was lost, though! She came back to the booth and said that there was going to be a photoshoot after the meet-up featuring ALL the Steam Punks at the con, and, apparently, the Guiness Book of World Records was going to be there to record this momentous occasion. However, after following around errant and, it turns out, lost Steam Punks for about 20 minutes, I eventually gave up and followed a couple of them back down to the floor. Steam Punks and Batman, riding the escalator together. Just another day at the con.

Joe Matt and Sammy Harkham have a “heart to heart”

while the Toms (Devlin and Spurgeon) have a face-off.

Just because your furry-porn booth has been dismantled, it does not mean that the unicorn horn must come off! Wear your (club) stripes and horns, proudly, fellow exhibitor!