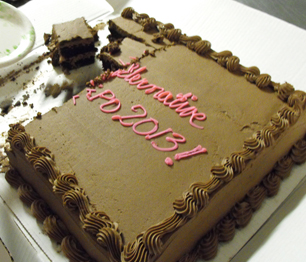 A piece of CAKE

Look guys, I really hesitated over the pun options for this title, and I got nervous… let’s just move on.

Look guys, I really hesitated over the pun options for this title, and I got nervous… let’s just move on.

I spent a long weekend in Chicago for the recent Chicago Alternative Comics Expo (CAKE). Thanks to Neil and Max and Edie and everyone else at CAKE who made the show run so smoothly! Friday night kicked off with a signing at the wonderful Quimby’s. I love Quimby’s for that vibe it has (in common with the Beguiling, and maybe Atomic Books?) of being chock-full of stuff you maybe thought went out of print ten years ago, but somehow simultaneously chock-full of fascinating stuff that you’ve never heard of before. 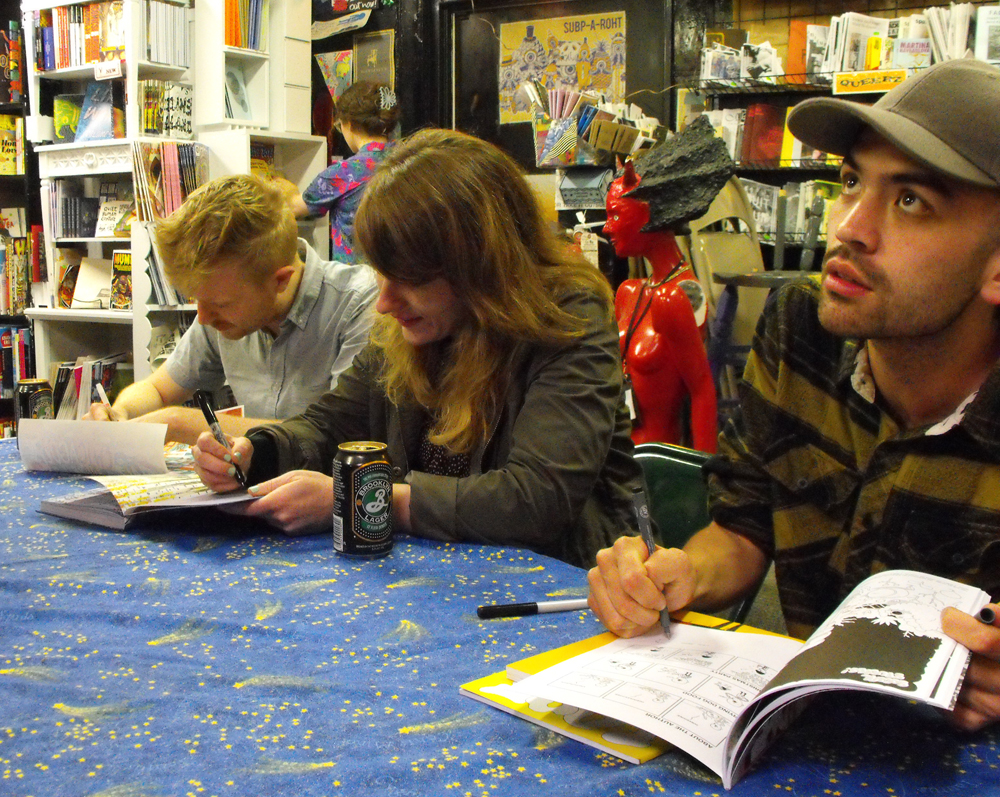 Here are Patrick Kyle, Lisa Hanawalt, and Michael DeForge signing away, with Ginette Lapalme in the background. Their signing was great – there were many old and new friends wandering around the aisles of Quimby’s, and I definitely saw a few trembling teens hand Lisa and Michael their books, which always fills me with comics ♥. Afterwards there was a comic art battle. I wasn’t entirely sure how that worked before, and maybe I’m still not sure? But it’s probably because I was busy gossiping with… 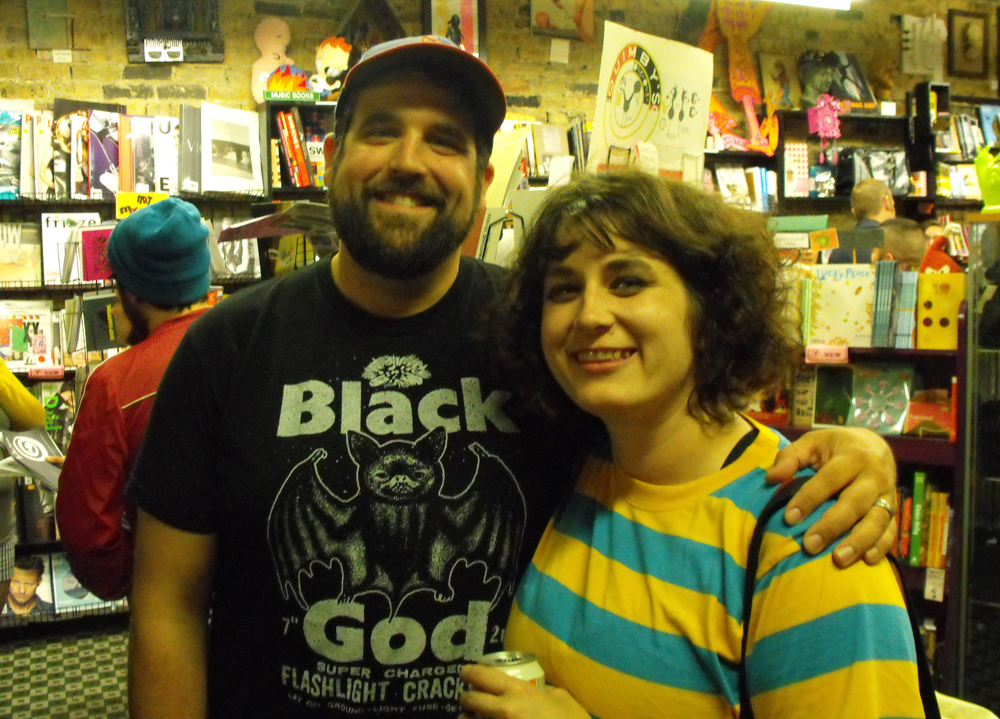 beloved pals Dan Zettwoch and Jessica Campbell! This was my first show with Jessica in oh, say, 11 months, and it was so nice to spend the weekend hanging out with this fine lady in her new town.

The next day, bright and early, Jess and I hit the Center on Halsted, which is a gorgeous community centre on Chicago’s North Side. The show was held on the third floor in a big auditorium, and I found it to be really well-curated, with a huge selection of local and non-local folks whose work I was not familiar with and was excited to discover. 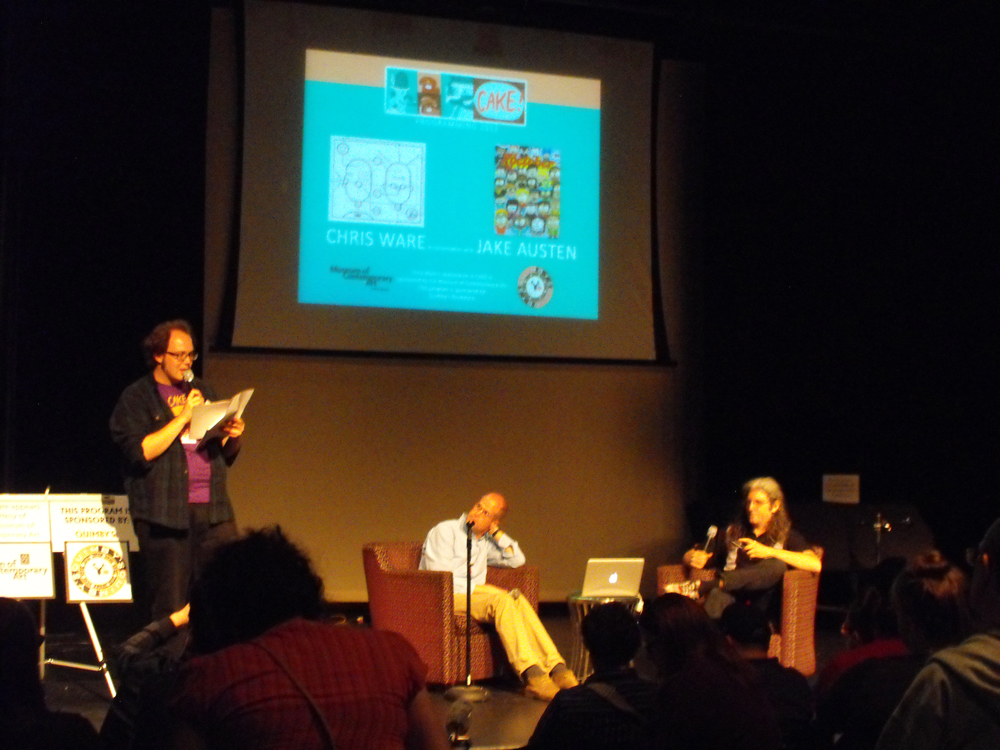 The first order of business was an interview with Oak Parkian Chris Ware, hosted by Jake Austen (Roctober Magazine). Here’s Max Morris from CAKE introducing. I think one of the highlights for me was when Jake asked Chris how he reconciles having a “Leave It To Beaver kind of life” with (maybe?) being a cartoonist, and Chris’s answer included “Does it still qualify as a Leave It To Beaver life if regularly, at breakfast, my wife tells me ‘I’m gonna stab you in the fucking throat?'”

But seriously, that conversation was filled with insightful gems about art-making and hilarious non-sequiturs, and the crowd (myself included) loved it. 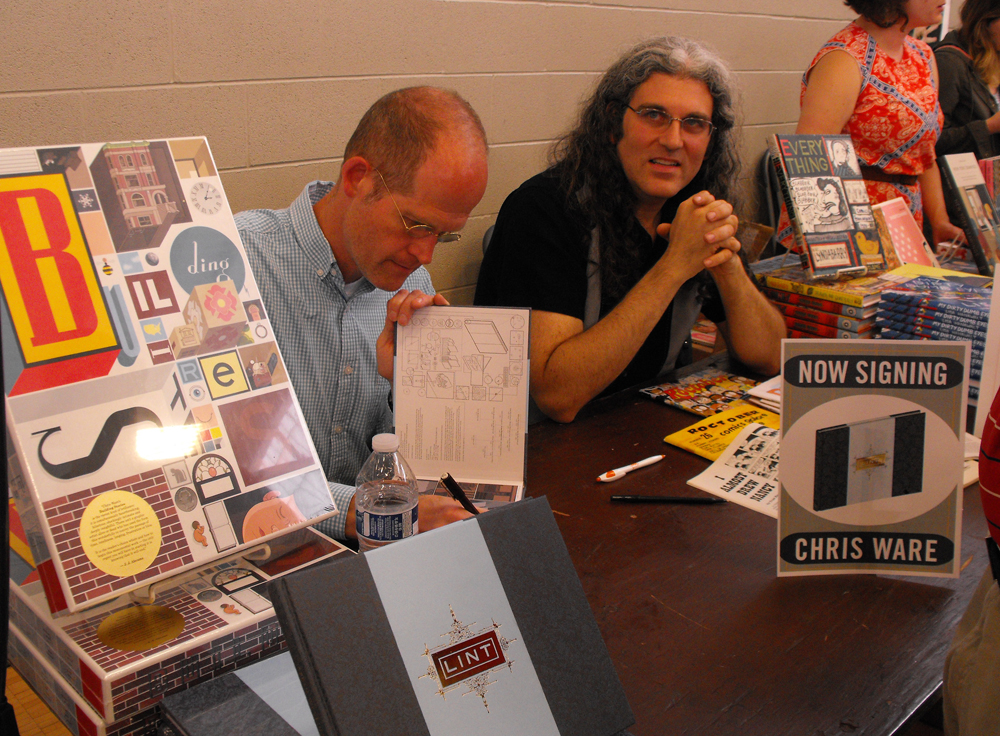 After their panel, Chris and Jake came by the D+Q table for a short signing, while Jake’s son plowed through the Enfant titles we’d brought with us. 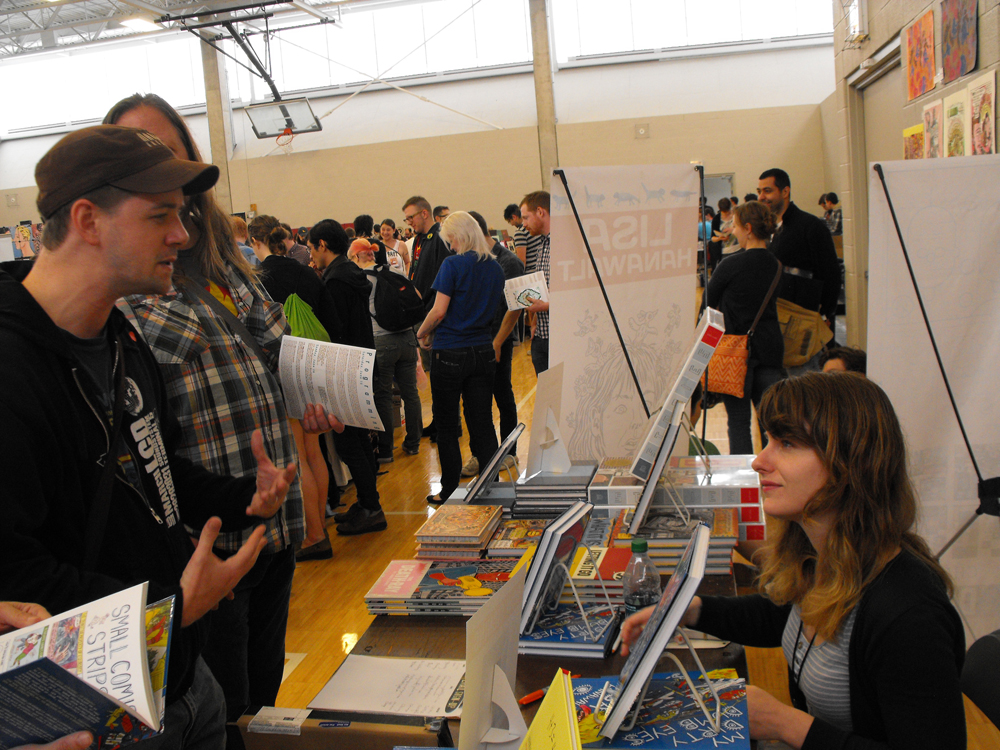 And here’s Lisa Hanawalt busily selling out of copies of My Dirty Dumb Eyes. Those books went fast! 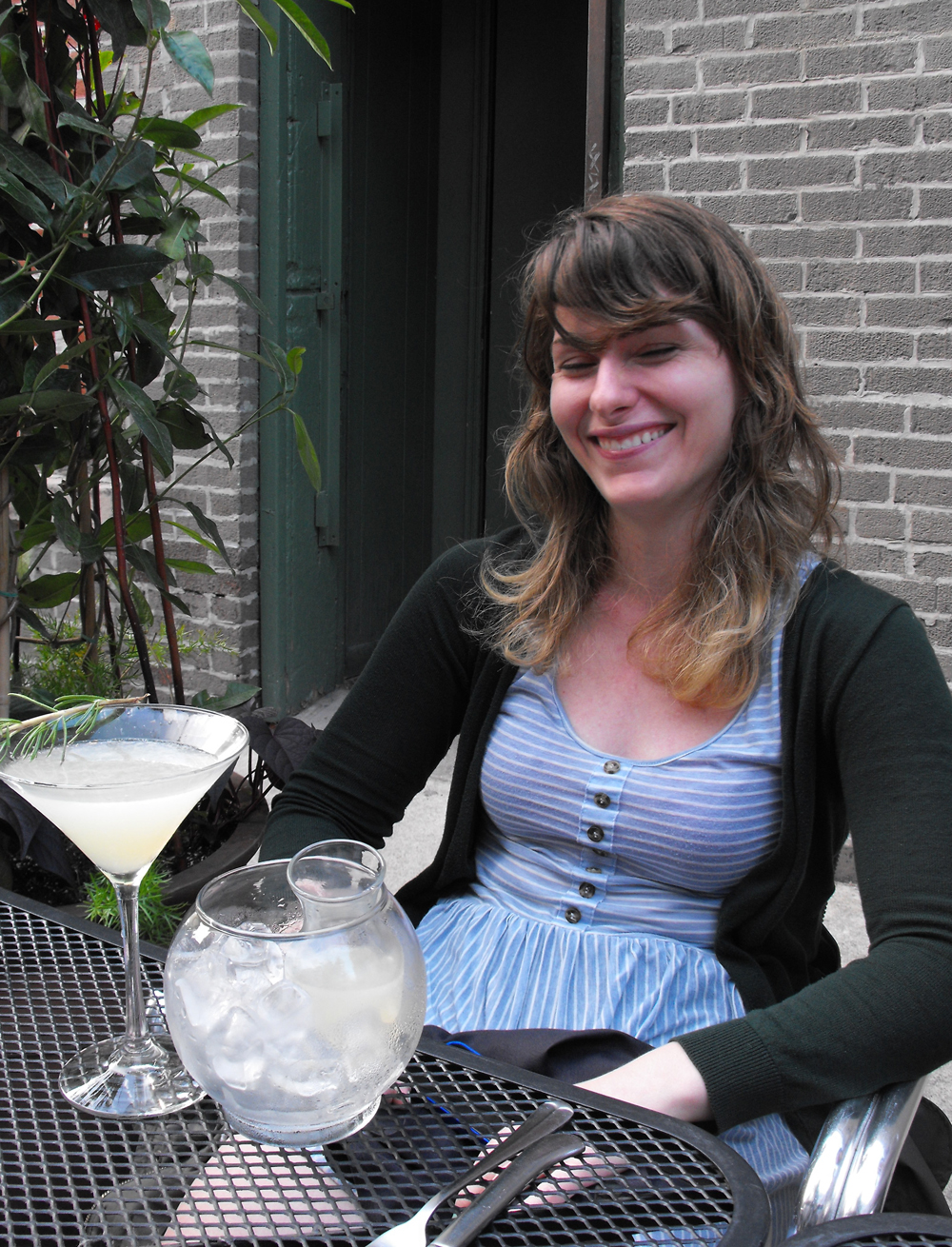 After a hard day’s work, it was time to relax on a patio.

Our server (who also turned out to be Secret Acres’ AirBnB host) was amazing – when Lisa told him she was from East Palo Alto and that was where Dangerous Minds was filmed, he said “Sickening.” in the most perfect tone of disdain imaginable. After that, Jess and he wound up on the same bus, talked for 45 minutes straight, and I think by now they must be BFFs.

Following a round of grapefruit digestifs, Jessica, Lisa, and I went back to our own Air BnB and renamed all of the fish/invertebrates in our host’s *saltwater* aquarium after different cartoonists. Then we headed out to the comics concert, where we missed all the music, but found the incredible rooftop view and the nearby diner. 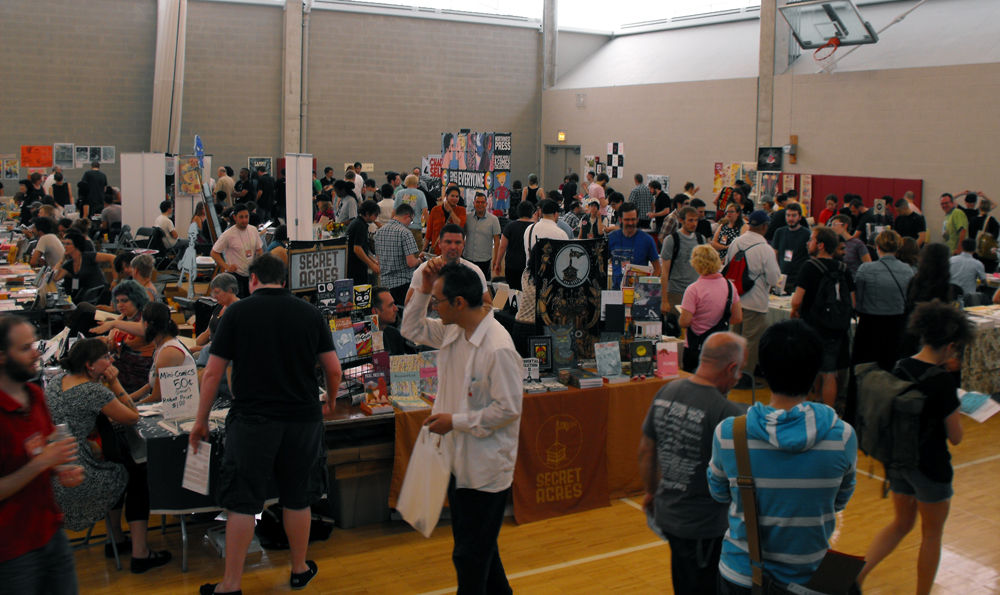 Sunday morning started off a little sleepy, which meant I got to walk around. 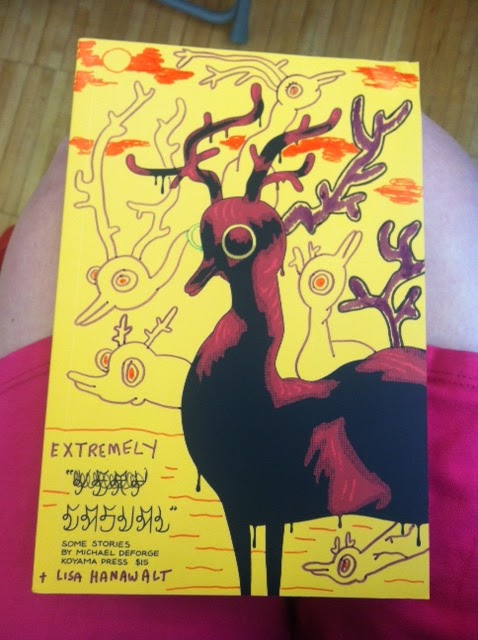 Lisa, having sold out of books, went around defacing other people’s comics and causing havoc. Exhibit A: Michael DeForge’s Very Casual. 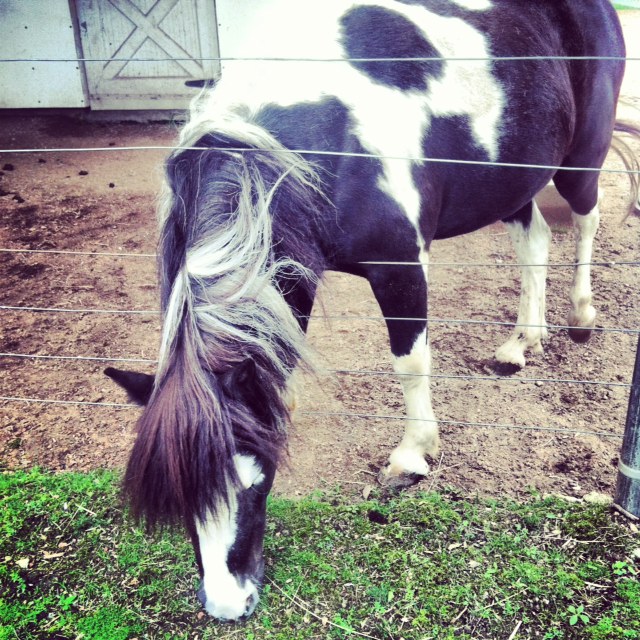 And when she grew bored with that, she headed to the zoo and found the ponies. Check out the fringe on that guy!

Meanwhile, back at the Center… 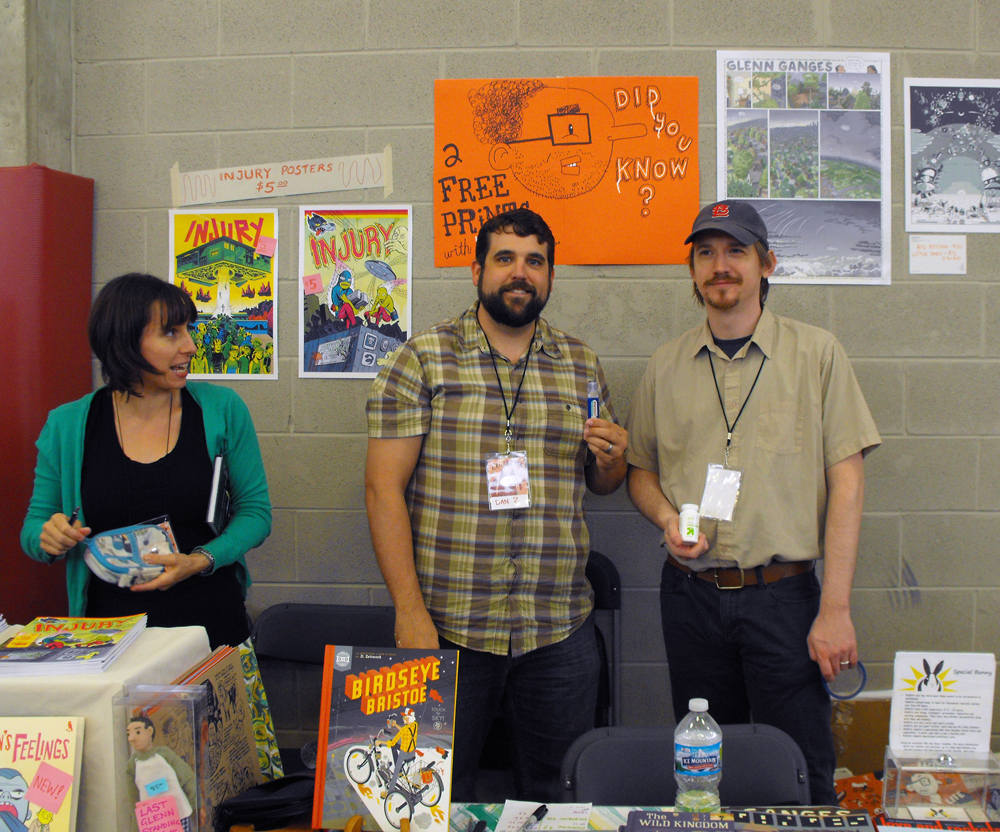 I swung by the Huizenga/Zettwoch/Mardou/May table, and admired the book version of Amazing Facts & Beyond. Keen eyes may spy a doll in the bottom left corner. 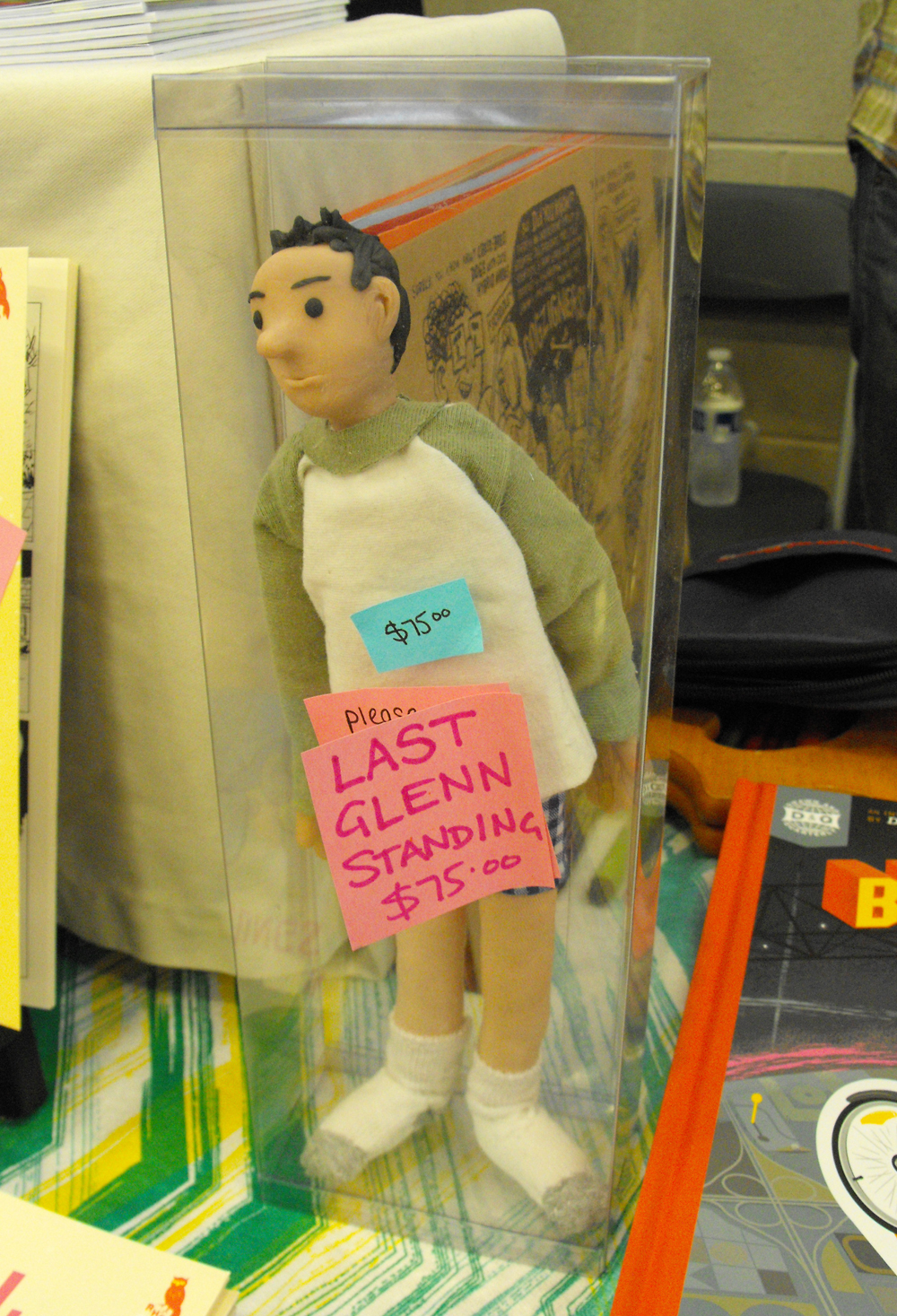 NBD, just a Glenn Ganges doll! He was, in fact, the Last Glenn Standing. The fellas told me they’d tried to convince Chris Ware to buy boxers Glenn instead of pants-wearing Glenn, and had utterly failed. Some battles are not winnable. 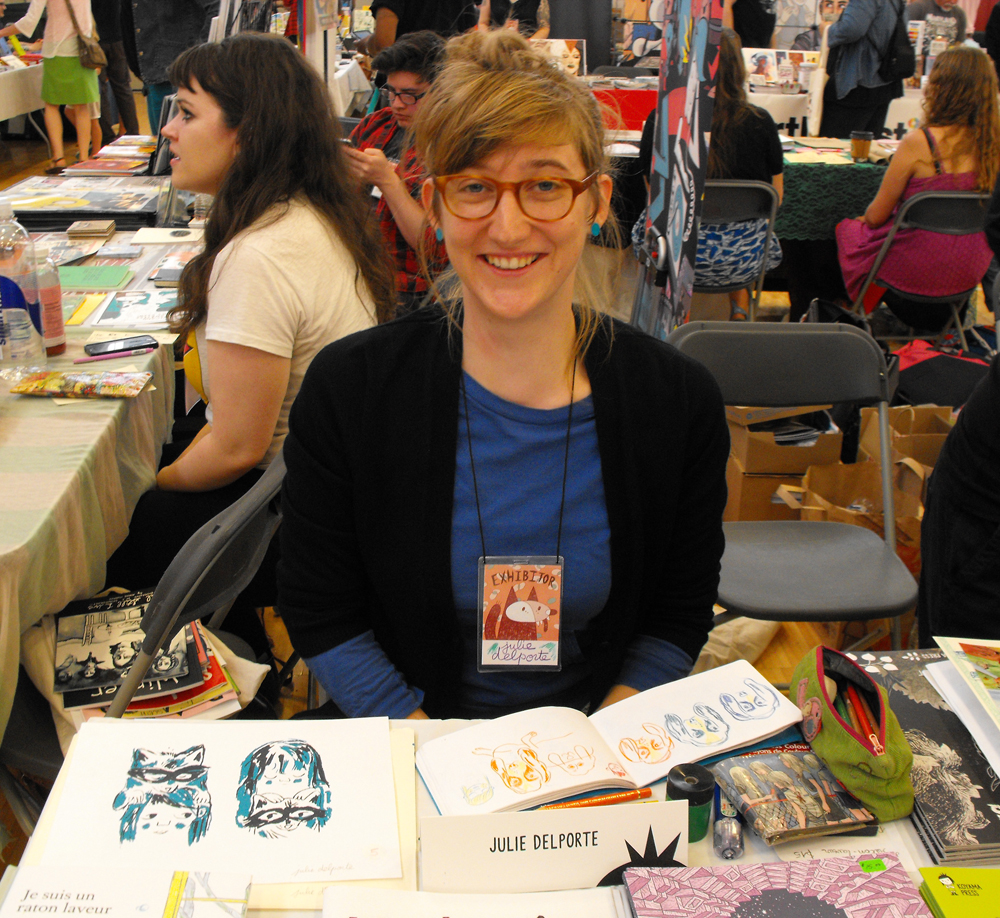 Right across the aisle, I spotted future D+Q author / current Librairie employee Julie Delporte at the Koyama table. Words cannot express how much I LOVELOVELOVE those basset hound drawings she’s been doing lately. I think if you pry you can spot them in her sketchbook there. 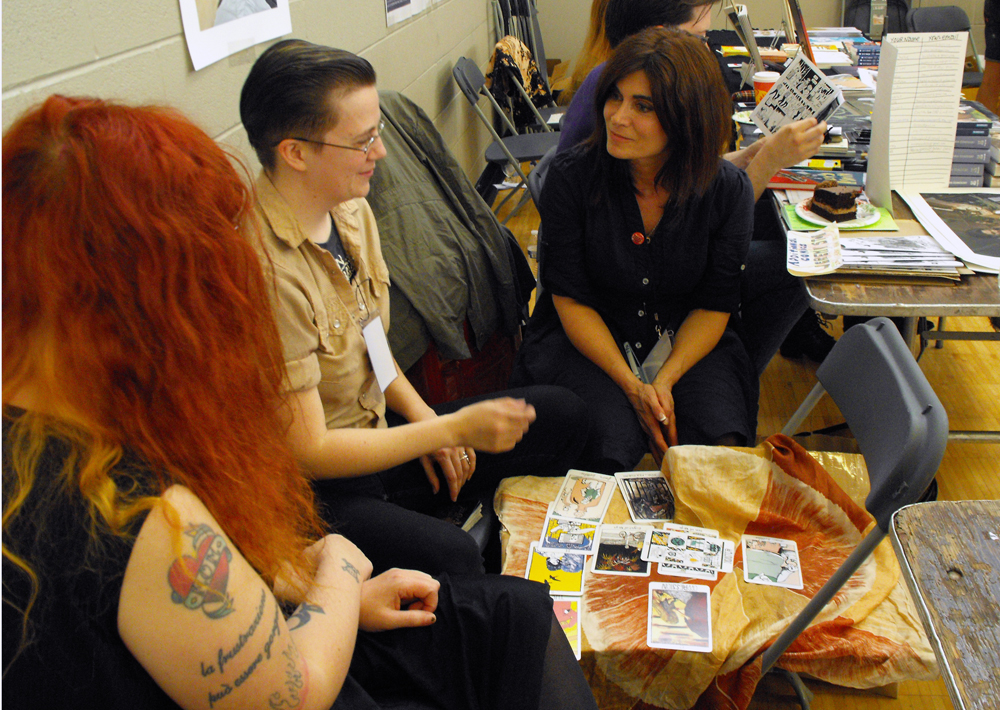 And one table over from us, the mysterious and wonderful Phoebe Gloeckner got her tarot read. I was told afterwards that there were some good twists in what the cards promised. 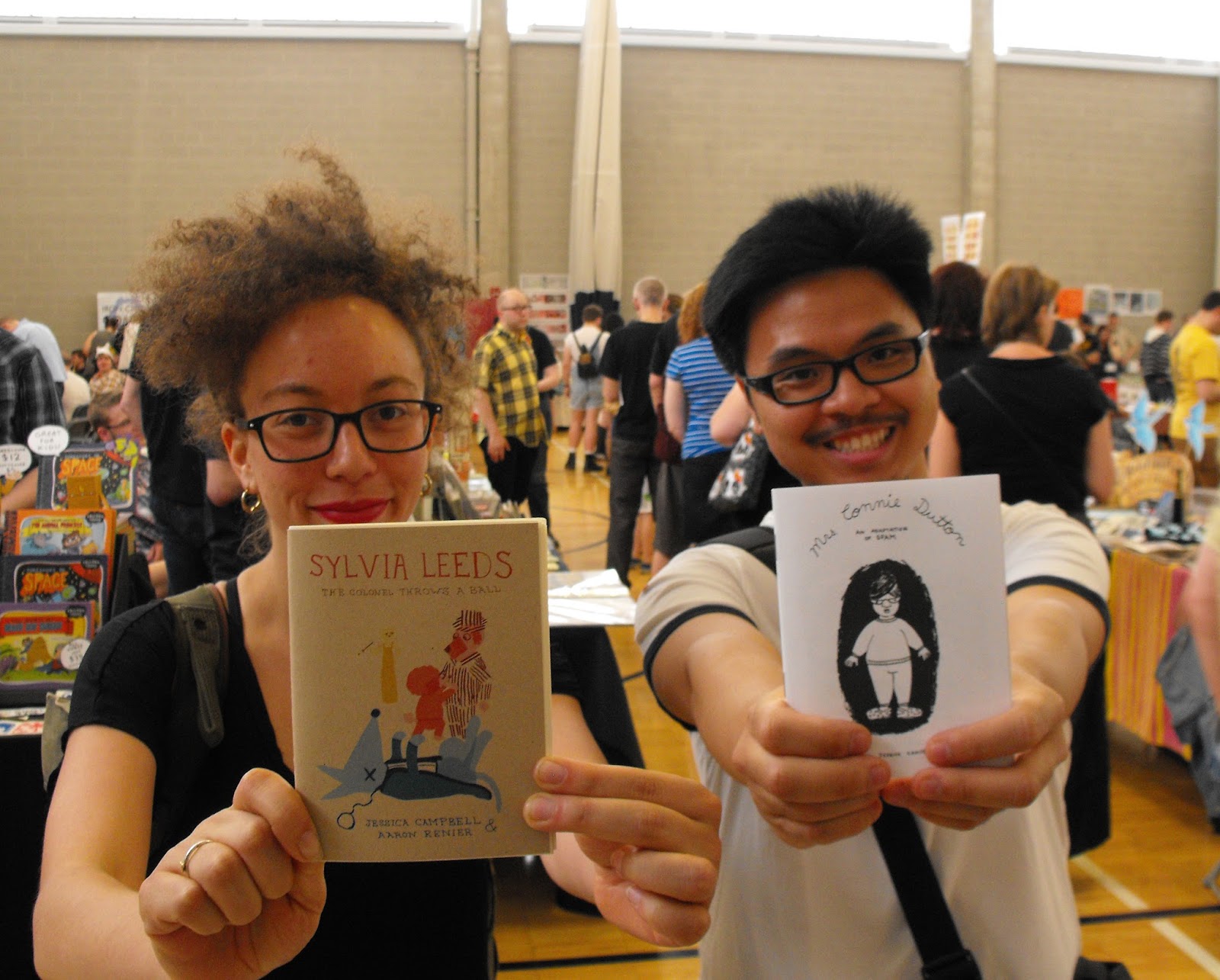 Finally, former D+Qer Jessica had not one but two(!) comics debuting at CAKE! Sylvia Leeds (on the left, collaborative with Aaron Renier) is now available at the Librairie D+Q (and I’m not sure where else! watch here for a link to an Etsy soon), and Miss Connie Dutton (on the right, solo) will be available soon from Oily Comics. Both are wonderful, and I recommend becoming a Jessica Campbell completist if the option is available to you.

Aside: Tom, watch out, these people seem to have your book-holding technique down. They may be the new books-in-office bloggers if you aren’t careful. 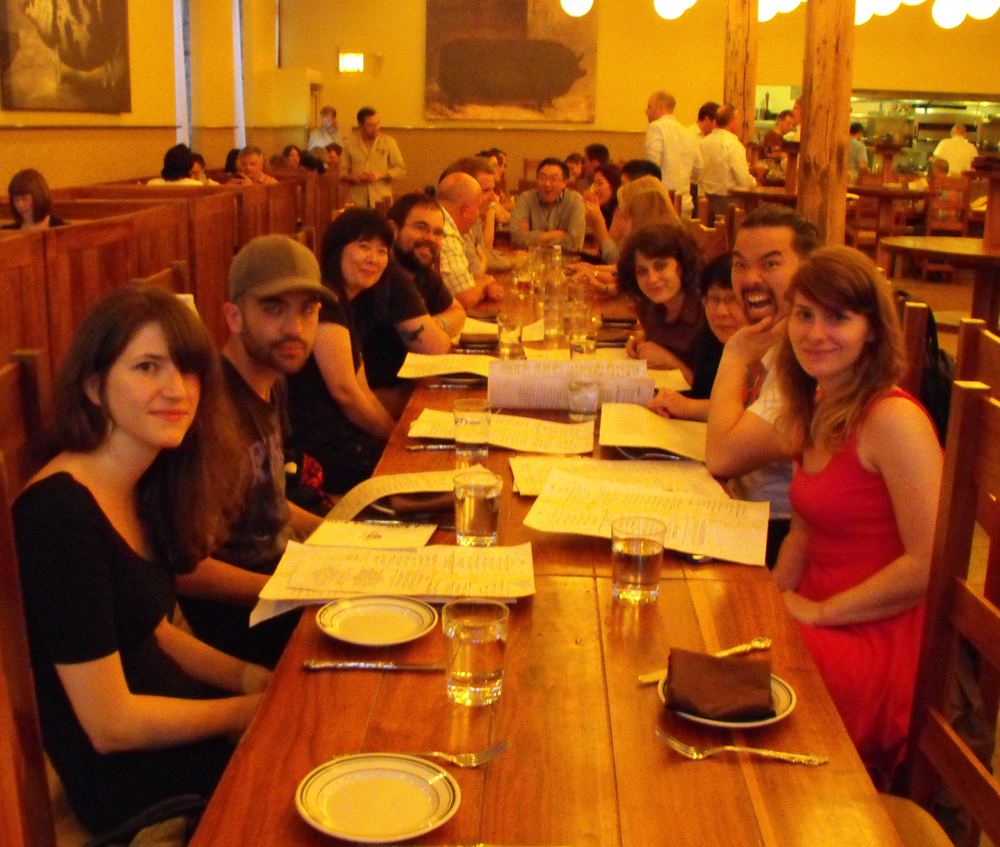 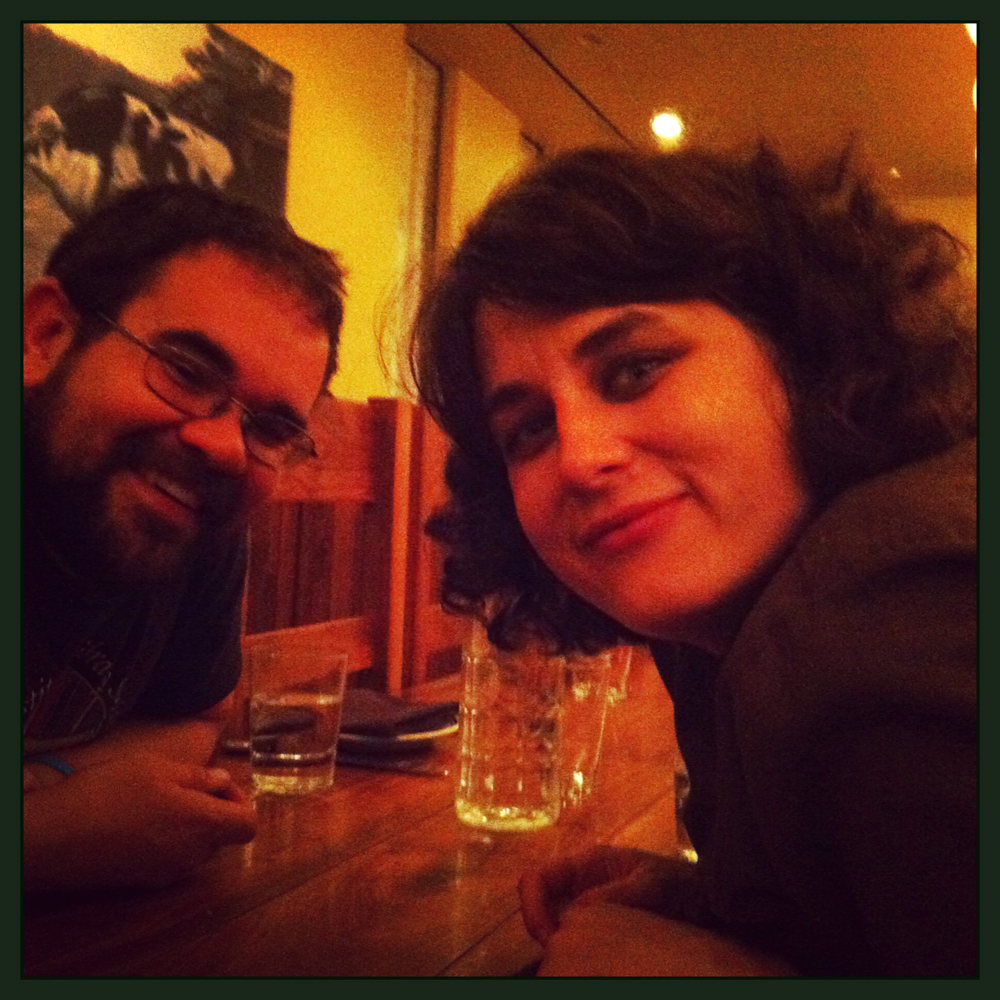 And here’s how the meat eaters reacted: 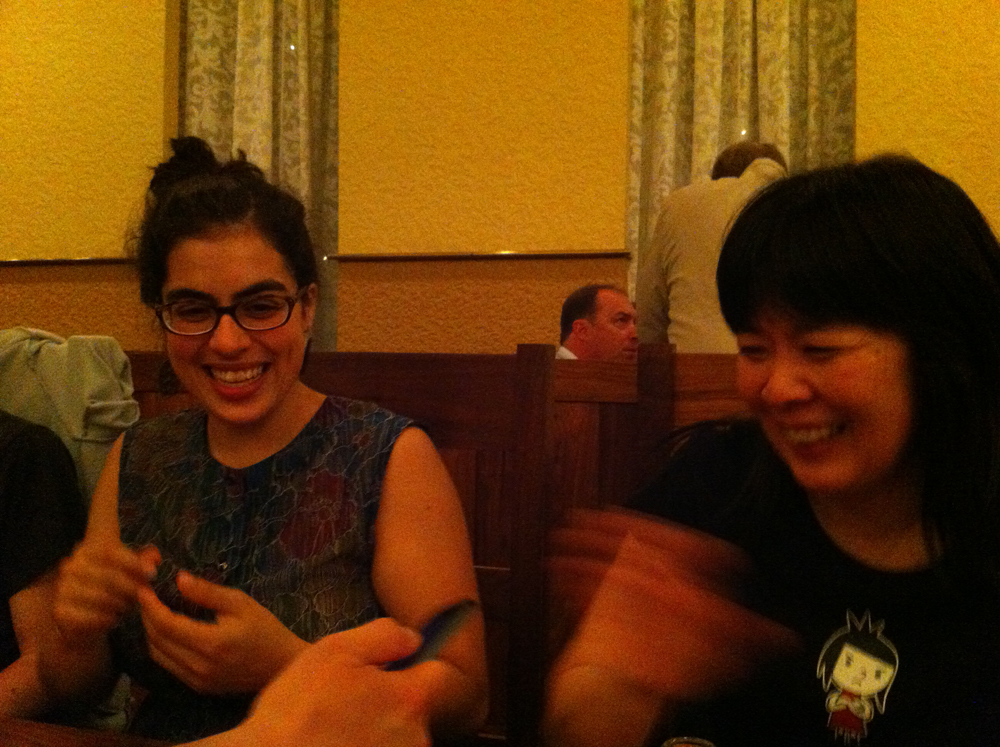 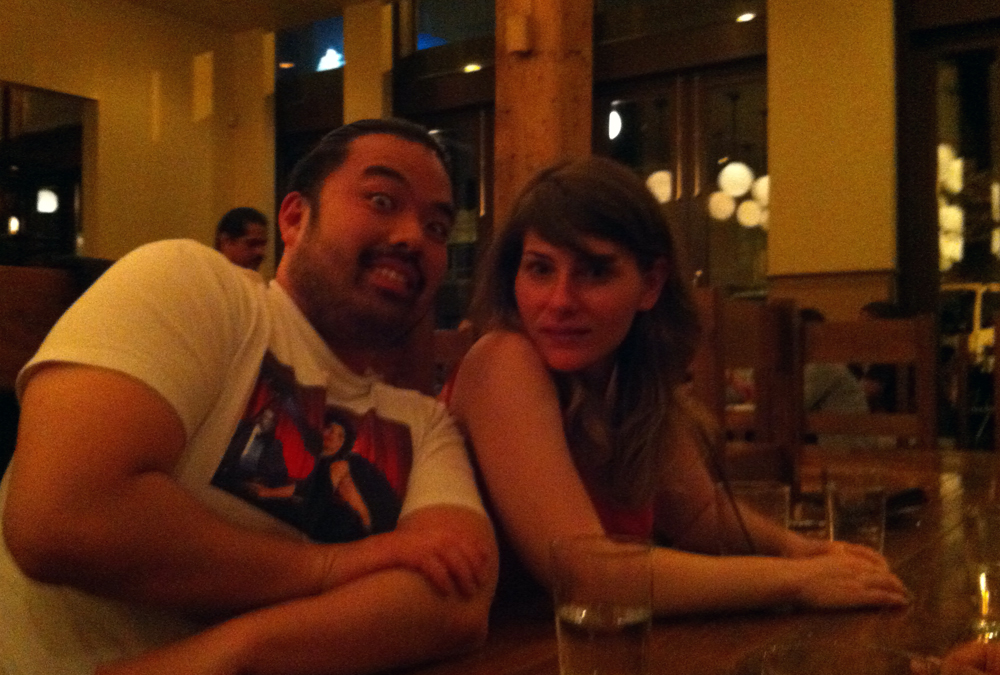 Not long after this, we evaporated in a pile of delicious beef hearts and early flights. Lisa and I went back to the apartment, jammed all our new, beautiful comics into our overstuffed suitcases, and said our fond farewells to the fishes. 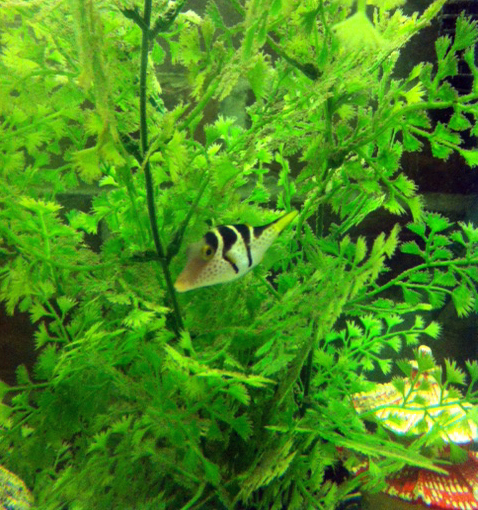 Just love it all

I tried to get Jade to cut out Putnam Gray’s face so she could stick hers through the hole, but as…

Imitation is the Sincerest Form of Flattery

Waaaaay back in 2001, the chief (D+Q publisher and editor-in-chief Chris Oliveros) returned from the small press festival SPX with a…