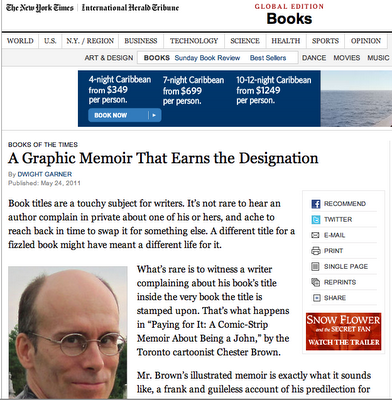 The NY Times Reviews PAYING FOR IT

Oh boy where do we begin with this awesome review of PAYING FOR IT in today’s New York Times? Maybe with “it delivers a series of moral and cerebral and horndog thwacks. It will stick in your mind and perhaps in your craw. It’s a real if squeamish-making work of art.” Oh boy where do we begin with this awesome review of PAYING FOR IT in today’s New York Times? Maybe with “it delivers a series of moral and cerebral and horndog thwacks. It will stick in your mind and perhaps in your craw. It’s a real if squeamish-making work of art.”

Or as pointed out by Jeet Heer to Dan Nadel, this gem: “the women tend to look lovely, while Mr. Brown — with his tight, unsmiling mouth; bald head; and long, thin body — resembles a praying mantis with testicles” which turns the tables on the dehumanizing criticism we have heard.

Or, how about how the review ends with a comparison of Chester Brown to philosopher Martha Nussbaum? Are you still reading this blog post? Why go read the review!

And for anyone needing a recap, here’s a recap on PAYING FOR IT:

“Trust us when we say you’ve never seen a graphic novel quite like cartoonist Chester Brown’s PAYING FOR IT.”—Angela Ashman, VILLAGE VOICE

“Best book I read: I just read Chester Brown’s new graphic novel, PAYING FOR IT, in which he recounts his experiences paying for sex. I’m not sure what I learned, but it’s a compelling read,”—Whitney Matheson, USA TODAY’s Pop Candy

“PAYING FOR IT is, at its cool, affectless heart, an argument for a deeply unpopular position, and as such it seems destined to become one of the most controversial memoirs of the year, graphic or otherwise. […] It’s never less than absorbing to note the way an excellent and deeply thoughtful cartoonist like Brown frames his assertions and employs his skill at visual storytelling to argue his point.”—Glen Weldon, NPR’s Monkey See

“PAYING FOR IT: A Comic-Strip Memoir About Being a John is garnering international attention, both for its provocative subject matter, but also for the sensitive and thoughtful way it is explored.”—Jian Gomeshi, CBC Q

“There is a commendable honesty [in PAYING FOR IT], to be sure: a kind of downbeat, detached naturalism.”—Naomi Fry, THE COMICS JOURNAL

“It is a testament to Brown’s accomplishment as a cartoonist that such heady stuff remains compelling reading, each thought progressing mathematically to the next. “—Sean Rogers, THE WALRUS

“One could argue that PAYING FOR IT is a very good book about prostitution but an amazing work about adult friendships and turning 40… Chester Brown remains now and forever a magnificent cartoonist, and in PAYING FOR IT his comics should make all sorts of readers from all sorts of points of view consider arguments they may never have given the time of day otherwise.”—Tom Spurgeon,THE COMICS REPORTER

“Chester Brown is a cartoonist I’ve followed, with admiration and occasional perplexity, for two decades now….The tone [of PAYING FOR IT] is tantalizingly intimate and detached.”—Ed Park, The TORONTO STANDARD

“Ultimately, a polemic’s job is to make a case to a reader, and Paying does.”—Paul Constant, THE STRANGER

“Chester Brown is unusually candid about his experiences in the Toronto sex industry, which he chronicles in a darkly humorous and painfully honest new graphic memoir, PAYING FOR IT. The 50-year-old is one of the world’s foremost cartoonists, and Paying For It is among the most anticipated comics of the year.”—Mark Medley, NATIONAL POST

“First and foremost, it’s an exploration and justification of prostitution as a logical option between consenting adults. But it also plays out as a tricky tale of unromantic love: a heartfelt argument against the ingrained cultural trappings of romance, and a fierce defence of the often overlooked joys of other forms of love (such as platonic, filial, interpersonal).”—Brad Mackay, GLOBE & MAIL

“PAYING FOR IT, cartoonist Chester Brown’s memoir in comic strips about being a john, is — well, asking for it. The word controversial doesn’t begin to describe this remarkably frank…book. [A] body-and-soul-baring memoir that is sure to stimulate strong reactions.”—Heller McAlpin, NPR’s Book We Like

“Brown’s subject is inherently fascinating—who’s not a little curious about other people’s sex lives?—and his cartooning skills are as sharp as ever. “—Noel Murray, THE ONION AV Club

“Any readers who thought they had stumbled on simply an offbeat chronicler of Canadian history are in for a big surprise indeed when they see Brown’s follow-up.”—Ian McGillis, THE GAZETTE

“A compelling look into one man’s history of employing prostitutes as a replacement for romantic love, this graphic novel is sure to create controversy.”—PUBLISHERS WEEKLY

“[A]restrained yet revelatory account of an intelligent but emotionally stunted man defiantly rejecting societal norms. Likely to be as controversial as it is fascinating.”—Gordon Flagg, BOOKLIST

“PAYING FOR IT remains a compelling, even occasionally hilarious book. It’s a difficult work in some respects in that while there is material here that will encourage serious, healthy debate.”—Chris Mautner, COMIC BOOK RESOURCES

“PAYING FOR IT, which features a number of sometimes heated conversations between Brown and his friends about prostitution, as well as a series of exhaustive, informative appendices, is very much a didactic book. That’s not a slander—its didacticism is one of the book’s strongest attributes. And, once read, I can’t think of a single reason why any thoughtful person would dismiss it, regardless of how firm their feelings are on the subject.”—Josef Bruan, VUE WEEKLY

“PAYING FOR IT is unflinching in its honesty (and adult content), and yet once the voyeuristic allure wanes, what remains is a frank, convincing look at a lifestyle that few readers will recognize.”—Alex Carr, OMNIVORACIOUS

“Above all else, PAYING FOR IT is brilliant Chester Brown autobiography, absolutely, completely honest. And in that honesty comes a great deal of humour. Brown is tentative, nervous and so completely socially inept that it’s actually funny.”—FORBIDDEN PLANET

“[PAYING FOR IT ] is a startling, honest memoir examining Brown’s scrupulously reasoned decision to reject the entire notion of romantic love and employ prostitutes to satisfy his sexual needs.”—Randall King, WINNIPEG FREE PRESS

THE COMICS JOURNAL with Sean Rogers

THE COMICS JOURNAL by Jeet Heer

WFMU’s TOO MUCH INFORMATION with Benjamen Walker (audio)

THE DAILY by Zach Baron

And let me leave with these two gems, with Fanny Kiefer of Vancouver’s Studio 4 asking the hard questions to Chester: