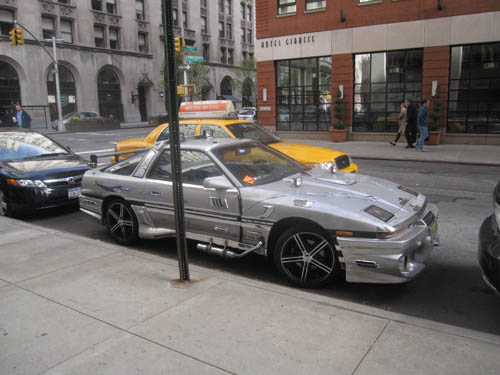 The Men of MoCCA

I admit that seeing this car outside of the Armory on Saturday morning got me VERY excited and in a good mood. Tom says it belonged to Ben Marra.

I admit that seeing this car outside of the Armory on Saturday morning got me VERY excited and in a good mood. Tom says it belonged to Ben Marra.

Oh yes, I know if Jessica was writing this blog post, you would already be splitting your sides in laughter, but she’s not here right now and Tom is on me to get my MoCCA report up. Special thanks to Randy of Bodega (who is taking a year off from cons) for keeping us fed, caffeinated and hydrated behind the booth.

I got to meet the marvelous Jacq Cohen of Fantagraphics. Jacq is pronounced Jack. All this time, I was pronouncing it like 227.

Here starts my photoblog of THE MEN OF MOCCA. How did I end up with 50 photos of men and very few of women? Does that say something about me? MoCCA? Comics? Anyway, this is Brian Heater of the Daily Crosshatch. This man worked very hard this weekend and it showed with thoughtful programming, an even temperament and always congenial. I must admit when I saw him escorting Gahan Wilson and Al Jaffee, I got “my fangirl on” {GROAN, I have been in comics too long! But I did, I must admit}

This is Mr. Wolk. I think he said he was there for pleasure. I’m not sure what that means.

I have known these boys, I mean, men for a long time now, and, yes, I feel like Bill and Austin’s Mom, especially when I attend their dirty-art-boy-after-party-in-a-Brooklyn-loft. I kid, (sorta) I love you guys. Now go clean your room. And the living room. And the bathroom. And the kitchen. And the stairs.

FINALLY! I met the man–Frankie Santoro. Retire from the con circuit for a few years to birth some babies and some tour de force of a personality makes the scene. Unfortunately, Frankie thinks I am some sort of Veruca Salt of comics, could be worse, I suppose, better than that gum smacking Violet Beauregarde.

Now here are some old pals of mine, Barry and Leon of Secret Acres. They are having a great year, congrats on the Eisner nom.

I spied Todd Hignite and Adrian Tomine shopping at the booth of the “competition” I’m looking forward to reading The Art of Jaime Hernandez and was extra excited to see Jaime making the scene. Who doesn’t love seeing one of Los Bros.?

I think someone needs to tell Kim the definition of a “sketch”.

This is Mike Lorah of Newsarama fame. Mike in person is just like Mike the comics writer, solid, steady and friendly.

Do you ever walk to into Jim Hanley’s and marvel at the fact that they have every single D+Q book EVER including all issues that are in print of Underwater, well you have this man to thank, Mr. Tony Shenton, our special agent to the comic book market.

This is Mr. and Mrs. Nicole Rudick, with their adorable son, Grover. The last time I saw Nicole was when we got Grover and Dagwood together in Park Slope when they were tiny babies in 2007 and told them how they would one day RUN publishing. Thanks iPad for killing that dream.

Oh yes, this belongs in our comics as tattoo art series. Pretty awesome.

Now here’s a meeting of the minds. Mr. Mazzucchelli, Mr. Madden, Mr. Sturm and introducing Jasper Abel-Madden. David was telling me how much he adores publicists.

Who is this clean cut J-Crew model you ask? Mr. Brendan Burford.

We had a new location this year, and we were very, very happy with it.

The new location helped us to sell out of ALL signing books. Adrian and Gabrielle sold out of their books in Saturday, Sturm by 1:00 PM on Sunday and Sikoryak’s lasted right through his Sunday signing.

And how awesome is Sara Varon? She is a sweetie, and my kids adore her Robot Dreams book. Seriously, they really love it. Do you have this book? What is wrong with you? And apparently, Sara adores our Aya Books!

OK, here’s the deal only the strongest and toughest can survive an interview with Paul Karasik. He acted out a page from every comic that James has ever created! Paul was great, and it was great for the audience, though I think when James saw the first slide of Down and Out Dawg, he was a wee bit nervous.

But I am being too hard on Paul, he was fabulous. I’m pretty sure James answered that comics did not help him get laid.

Don’t tell the students of CCS, but I think recall James saying no. I KID! I KID! He actually said something very poignant, that I would only butcher when paraphrasing.

I do say that after spending two days in the Armory, the experience makes me miss windows and makes San Diego seem bright and airy. Though this is not a knock on MoCCA, the show was impeccably run this year and I have no complaints or sardonic remarks. You know, just that, well, I miss seeing the blue sky. Oh, and also, that you really lucked out if you are in the National Guard and you have Comic-con duty, cuz that is one cush job and you can easily take any one of the people who act up.