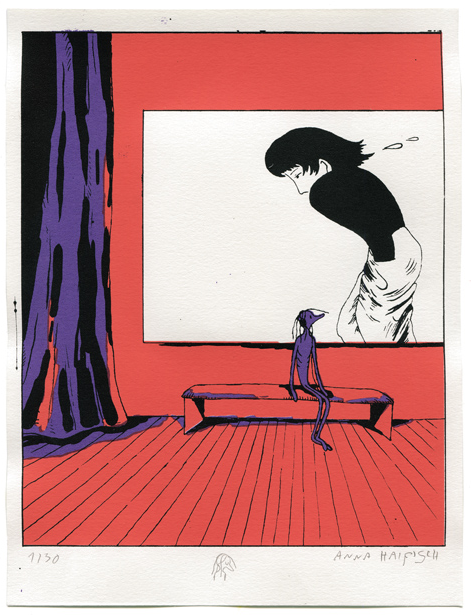 Red Colored Elegy remains on my short list of all-time favourite comics. Which shouldn’t really be a surprise, it’s one of the most well-regarded Japanese comics ever published during the golden age of gekiga or manga for adults or art manga or whatever you want to call it. When we published the initial English version back in 2008, this book was known as one of the greats but really only by people in the know—either people who could read Japanese or who followed their favourite artists from GARO and other Japanese anthology magazines. When I first saw the Japanese comic that we would use to create our version, I immediately recognized a David Mazzucchelli comic from 2000(?) as an homage. Of course, David knew what was up way before the rest of us!

I frequently describe Red Colored Elegy as the single most emotional comic I have ever read and in many ways that holds true. Hayashi has a knack for capturing the overwrought emotions of a young couple in these kind of frozen cinematic moments. There are moments clearly influenced by new wave cinema mixed with a modern Japanese spareness. It really is a book that rewards repeated reading—new things come out both in the writing and the gorgeous spare drawing.

Now for this paperback edition ten years later, we have asked the foremost English scholar on Japanese comics, Ryan Holmberg, to talk to Hayashi and reread Hayashi’s many interviews and essays on this masterwork. Ryan always delivers a detailed and thorough history of his chosen subject and this essay is not different. Mysteries are solved and the full impact of Red Colored Elegy is explained.

Finally, it’s gratifying to see its impact on younger artists. Have you seen this gorgeous drawing by the insanely talented Anna Haifisch? I know, amazing, right?

Red Colored Elegy remains on my short list of all-time favourite comics. Which shouldn’t really be a surprise, it’s one of…

Good morning, internet! Have we got a fall 2015 catalog for you to look at today, featuring Adrian Tomine, Kate Beaton,…