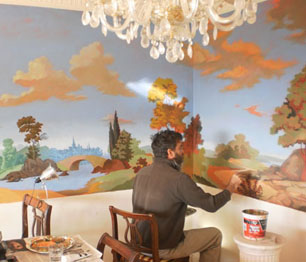 Congratulations to Anders Nilsen, who, after landing on the Amazon and Publishers Weekly best of 2011 lists, BIG QUESTIONS is the only graphic novel to have merited the distinction of being one of the 100 New York Times Notable Books of 2011 for adults. The grey lady’s original review of BIG QUESTIONS by Douglas Wolk is here.

Somehow the walls of Mimi’s and Wayne’s otherwise idyllic studio setup can’t contain their combined creativity, so while I was there Wayne was hard at work on an elaborate mural in their house upstairs; it will eventually wrap around their entire dining room.

Wayne is an artist with a long list of versatile accomplishments, from set and puppet design on Pee Wee’s Playhouse (he even did some of the voices) to his current painting career. Go ahead and order Maybe Now I’ll Get the Respect I So Richly Deserve, it’s one of the best artist monographs published in recent years.

Here’s the view just outside the door of their studio. Can it get any better than this?