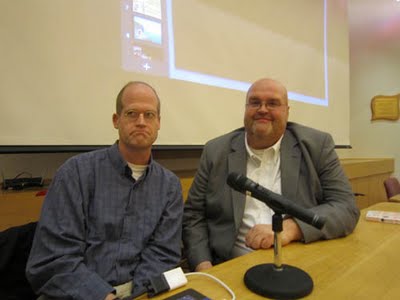 It is no secret here in the office that we think very, very highly of Tom Spurgeon and his blog, The Comics Reporter. Obviously, as we are an advertiser, and we barely advertise anywhere!

So when Tom took a hiatus this summer, we knew something was amiss. Something life threatening had to happen, as he is too much of a professional to just decide “hey i’m taking a vacation” and unfortunately our instincts were right, as Tom described in his poignant essay this past weekend. Besides Tom’s personal state of health which is the foremost concern, of course, what struck me most about the essay was Tom’s ability to deftly sum up the impact and allure of comics as a lifestyle. And while it’s easy to joke about being scared of being a “lifer” as I often do, Tom points out there isn’t any shame in that:

You could do far worse than to build a lifetime of friendships with the people you meet in comics. Far, far worse. I’m not sure you could do much better. As much as I’m made uncomfortable by a vision of comics that lacks the comics themselves, a way of approaching the professional and artistic communities that could without blinking substitute designer baskets or arcade games or action figures for the comics medium, I understand the appeal of wanting to stay around smart, curious, kind and mostly forgiving people for as long as possible, even if one’s passion for the art form fades. As always, Tom cuts right to the truth of the matter.

Take care of yourself, Tom! And speaking on behalf of the industry, please put yourself before comics Tom and get better, because sitting through three and half hours of the Eisners without you, isn’t as much fun as with you there!