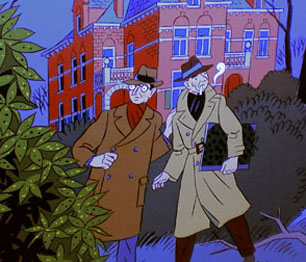 We just received a couple of advance copies of The Adventures of Herge, the biography in comics form of the famed Tintin creator, otherwise known as Georges Remi.

We just received a couple of advance copies of The Adventures of Herge, the biography in comics form of the famed Tintin creator, otherwise known as Georges Remi. It’s a fascinating, well-researched account of Herge’s life, from his childhood right through to his death in 1983. And in a loving homage to its subject, the book is drawn in a “clear line” style by Stanislas, one of my favorite French cartoonists (and one of the original founders of the French publishing house, L’Association).

A shorter version of this book was excerpted years ago in a long out of print Drawn & Quarterly anthology, although the authors and artist have since expanded it to include an additional 12 pages of material. In fact, some of the new material was drawn as recently as 8 weeks ago, and we had to keep our printer at bay while waiting for Stanislas to turn in the pages.

One of the last added chapters recounts how a Tintin movie almost got made in the early 1980s by Steven Spielberg, one of the only directors that Herge trusted to pull the whole thing off. It finally happened, although sadly almost three decades after Herge’s death: Spielberg’s Adventures of Tintin film opens on December 23. This book will be in stores a little earlier than that, by mid November.

Well, I was waiting until I had my Fall 2011 list absolutely finalized but Bryan Munn of Sequential beat me to…

So many books coming out this fall and I think we’re actually all caught up here at the office… Oh, and…