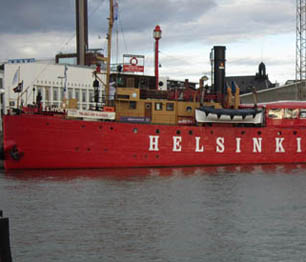 A last minute invite to go to Finland and attend the Helsinki Comics Festival meant that Peg and I barely had a chance to catch up on work and research for the trip but we were game to fly off at a moment’s notice and talk about North American comics to who ever would listen.

A last minute invite to go to Finland and attend the Helsinki Comics Festival meant that Peg and I barely had a chance to catch up on work and research for the trip but we were game to fly off at a moment’s notice and talk about North American comics to who ever would listen. Man, flying west for so many hours is a killer! After checking into our hotel and a four hour nap we headed out to see some sights and grab some dinner. Thursday would be the day where things really got going so we decided to take it easy.

Our bookstore stop was the famous Akateeminen Kirjakauppa (it was too late to hit a couple other stores we hoped to see) revealed a ton of Moomin books which is always nice to see. In case my photo is too small see that one book is called Good Night, Mr. Clutterbuck not what you first thought.

What do you eat when you go to Finland? TAPAS, of course. Look, it was short notice. As it turned out we were right across the street from the display room for Like Publishing (pronounced lee-KUH I believe). We were in the publishing district evidently.

Afterwards we grabbed a nightcap at the Jason-recommended Corona Bar and spotted a local cartoonist (Mikko Väyrynen) in the corner reading a copy of the gigantic tabloid newspaper Kuti 21. This is truly the golden age of gigantic tabloid comics newspapers!

Hmm, things go a bit astray as Peg and I wander drunkenly into a grocery store. Let’s just leave this photo be and move along, shall we?

Thursday morning, our FILI itinerary says we have a meet-and-greet and then a quick trip to a library to see a 100 years of Finnish comics exhibit. But before that Peg and I rush off across town to meet Sophia Jansson (niece of Tove Jansson, daughter of Lars Jansson) at Moomin Characters Oy offices. Sophia is in charge of the licensing and of course we were very excited to meet all the people we’ve been emailing since we started publishing the Moomin books five years ago.

What follows is my dream come true as I get to see hundreds of Moomin toys stretching back to the very beginning of the characters creation. Amazing. I only hope someday that some enterprising Moomin Characters intern creates a comprehensive catalog of these items. I didn’t even have enough time to take all the pictures I wanted. So many great toys, games, drawings, candies, golf clubs and on and on.

Our host Sophia and Marketing Director Roleff (also husband) look in the wrong direction ( I think Peg had a camera too and we misdirected their gaze. Sorry, guys!).
And we take our leave.

And race across town via subway (I include this picture because I love the color of the seats. That’s it.)

Breathless, we arrive at FILI (the Finnish Literature Exchange) and meet the other invitees (photos later) and sign in.

Then off to the National Library and the Finnish history exhibit.

Juhani Tolvanen showed up for his lecture one hour late and angered his North American publishers. JUHANI!! Look for his book Moomin Every Day next March.

Then lunch with special guests Tommi Musturi (pictured) and Sanna Oksama from WSOY.

A quick salmon salad for me and a salmon soup for Peggy and then off to the Finnish Cartoonist Society. They have their own building.

They have studios and offices and a cafe.

What is this, paradise?

“Will I see you in the sauna later?” says anthology editor Ville (left). He meant Peg but he got me.

A short trip to the Arabia factory store to look at the new Moomin line of mugs and bedsheets and pillow cases. What?!?! We like Moomin, all right? And some missed connections and we’re standing on the street with a cabbie refusing to give us a ride home. Eventually we flag down a taxi and get back to the hotel just in time to head off to the sauna. {Sam Arthur from Nobrow and myself waiting waiting waiting.}

The sauna. Oh, people, the sauna.

{Stephan Pastis who draws Pearls Before Swine (right) and I discuss getting naked in front of strangers while we wait for the ladies to clear out.}

Okay so it’s super hot in there and you sweat like a pig but you get to drink some Karhu (the Finnish beer with an awesome bear logo–the bottle gets hot so don’t take a 40oz in there people) and you sit hip to hip with strangers sweating all over them too and some people do not like jokes in the sauna let me tell you no they do not. {Hey, Sam, be cool.}

Then you run to the Baltic Sea and some other Americans work out a few times a week and it shows I know and then back into the sauna and maybe Peg films you but she has to throw that version out because you turn too quickly and that is not cool. Years ago, Chris, Seth, and Adrian went to Finland but they declined the numerous invitations to the sauna. I did not need to be asked twice. Hot room, lots of sweaty dudes, beer, salmon soup after a dip in the sea. I’m in. {Our FILI hostess Maria serves up some salmon soup!}

Video? Sure! {Do not watch if you are squeamish.}

And then we went out to a comics launch for the previously mentioned Kuti. Whew and then home. Go to sleep!! Tomorrow is Tove’s house!!

The Moomins and the Great Flood

Even without as many pictures as we’re used to from the Moomin comics, Jansson’s whimsical and exciting voice shines. There are…