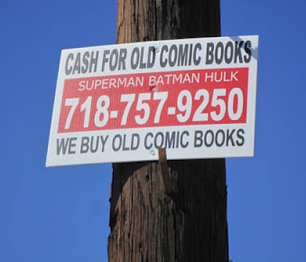 I’m heading home to Montreal right now on the train after being on the road most of the past couple of weeks. I probably ordered the hamburger too often. And beer. At the beginning of all this traveling I headed down to New York City to meet Guy Delisle for the beginning of his North American Jerusalem tour.

I met up with Matt Forsythe (Jinchalo, Ojingogo) and Tom Gauld (Goliath, Gigantic Robot) and we headed out to Brooklyn. {Pictured: actual sign nailed to telephone pole 20 feet up.} 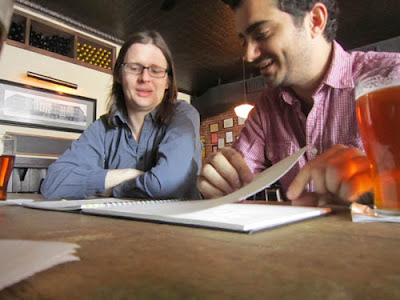 Almost immediately we stopped into my old fave Greenpoint neighborhood bar, The Pencil Factory (WE GET THIRSTY!) Here are the boys poring over Tom’s sketchbook while sipping some local brews. 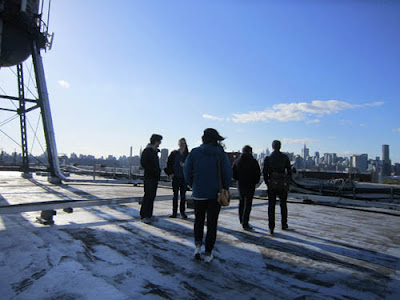 The plan was to meet Jillian Tamaki around here anyways and as it turns out her husband, Sam Weber has a studio right across the street in the actual old Pencil Factory. Take my word for it, there are giant pencils on the side of this building. {Up on the roof overlooking Manhattan with Jillian, Sam, Tom, Matt, and new friend Jon Han.} 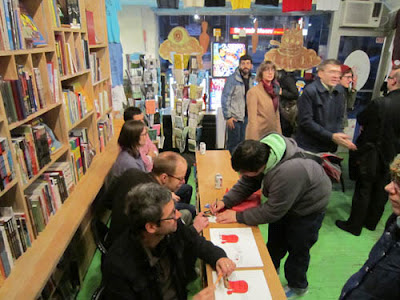 Later that evening, we headed over to the fine commix shoppe Desert Island. Proprietor Gabe was hosting an international shindig of comics dudes with Tom and Matt and Jason and Nicolas Mahler. 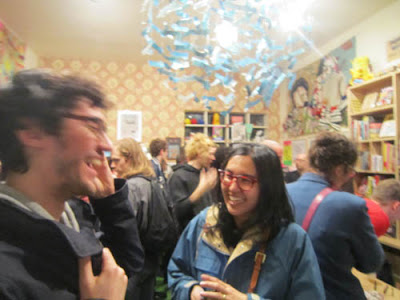 Sam (left) and Jillian. I think this is when my daughter Gigi prank called me so I just let Sam talk to her. 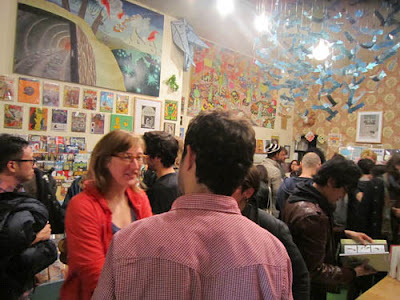 Matt (back to us) and Julie Delporte (left) chat. Julie is the rising new comics star in Montreal. You’ll know her work soon enough I guarantee. Later, we had dinner nearby and ran into a former intern who was in NYC on academic business. Well-la-de-da. Former interns will become a theme over the next week I tells ya. 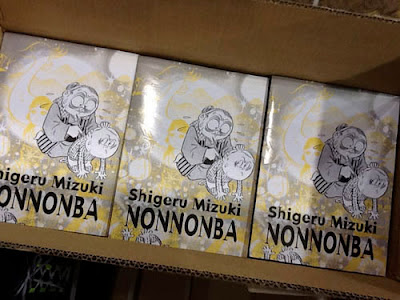 Saturday morning and I get my first glimpse of the finished Nonnonba by Shigeru Mizuki (translated by Jocelyne Allen.) I’m very excited about this book. Reading it was a complete surprise, I think I expected a classic monster book and instead it’s much more of a autobiography about growing up in small town Japan. It might be my favourite comic about childhood ever. 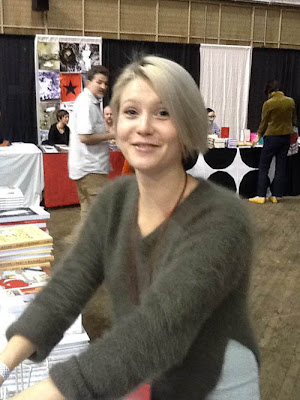 Former store employee Fiona, a recent NYC transplant, helped me out for the two days at the Armory. She is a delight. 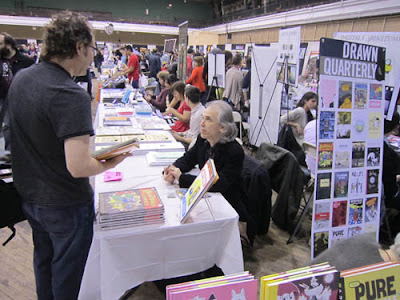 Bob Sikoryak starts the day off signing copies of Masterpiece Comics and chatting with the fans. Bob is currently in Vermont teaching those Center for Cartoon Studies kids what is what. 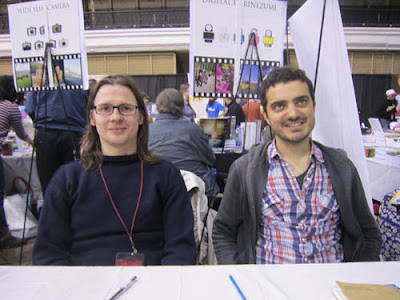 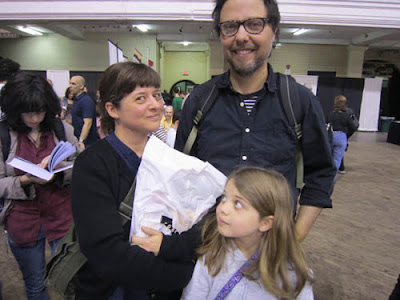 Is this my favourite comics family, The Scalzo-Goldfingers? Hmm, is it? {Djerba, Kevin, and little Eva brightened my morning. 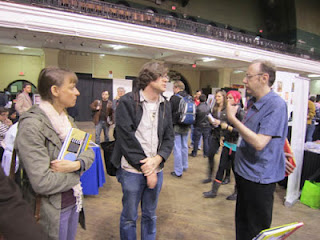 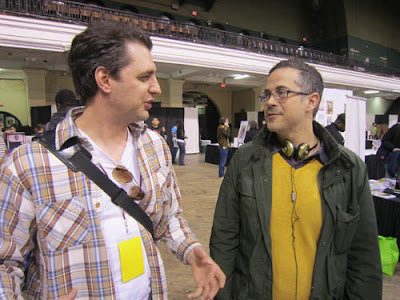 Finally, I have a picture of Gabe Fowler (left) in here. Chatting it up with my old pal Jeff Konigsberg. Jeff introduced me to the cartoons of this young Massart student named Ben Jones all those years ago. 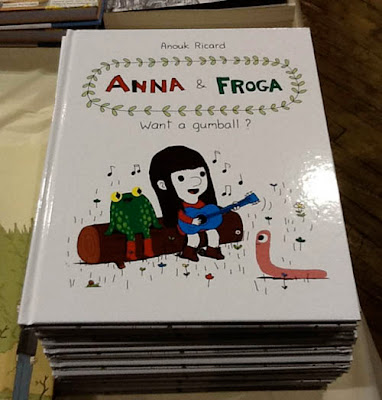 Another MoCCA debut title, Anna & Froga. PEOPLE THIS COMIC IS FUNNY!! Buy it for every kid you know! IS the Free Comic Book Day version still available? Not sure but look for it. It’s free and funny and you get to see how good this is. 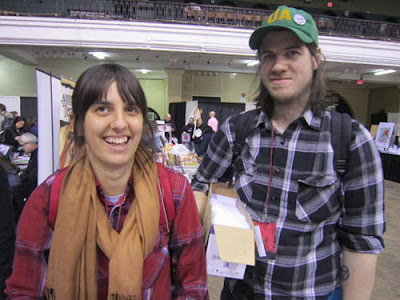 Greatest Former Interns Melissa Mendes and Chuck Forsman. These kids (KIDS!) are shaping up to be great cartoonists and someday they will blow your mind. Go order some comics from them. 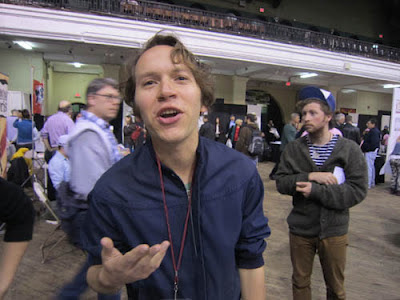 Austin English. Awesome Publisher (Domino Books). Check it out! {Austin made me retake the picture so it would look like he was making a point about something.} 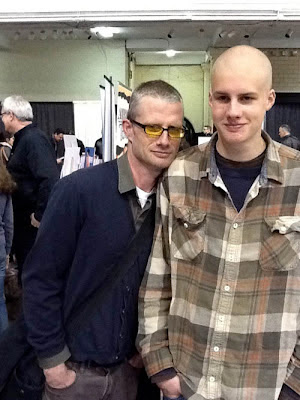 Old palsy-walsy Kurt Wolfgang seen here with his gigantic son Johnny. I didn’t want to say it before but the shaved head scares me. On a young man. It scares me. Okay. 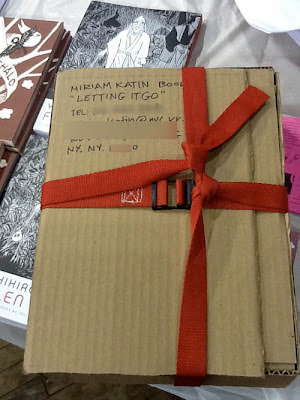 Miriam Katin showed up and dropped off her new book. A big fat package of gorgeous originals. Read about her new book here. 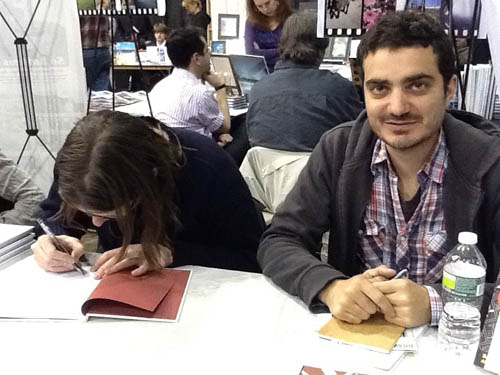 Okay, boys, let’s shut her down. You go to Providence and I’m going to head home to Montreal for a few days. I’ll meet you there and then we can head off to Toronto for TCAF. What do you say?

All the fun this weekend

Look, I know most of you are on a lake sipping a cool bevvie, but there are a number of great…

We’ve got events in both the southwest and northeast United States this weekend: Miriam Katin and Sarah Glidden are in Columbus,…