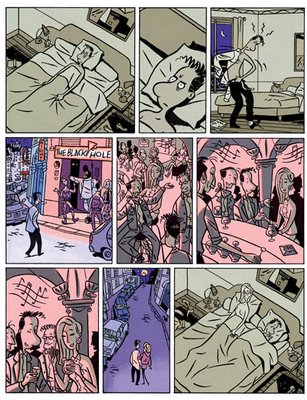 It was just announced yesterday that the celebrated French cartooning duo Dupuy & Berberian was awarded the “Grand Prix” at this year’s Angouleme festival. It’s perhaps the most important comics award in the world and it’s good to hear that it’s being given to two of the most deserving cartoonists in Europe.

Dupuy & Berberian have been writing and drawing comics for over two decades and if you’re still not familar with their work there’s no better place to start than with Get A Life, a collection of their earliest Monsieur Jean stories.

One of my favorite books published by anyone in recent years is Maybe Later, a fascinating diary-account of their year together working on some of the Monsieur Jean stories that appear in Get A Life.

D+Q is also just about to publish Philippe Dupuy’s first solo effort, Haunted. It’s a spare, beautifully drawn story exploring a somewhat darker and more contemplatitive side of his sensibility. In conjunction with its release, Philippe Dupuy will be coming over to North America for an event in New York with Charles Berberian. More news soon.