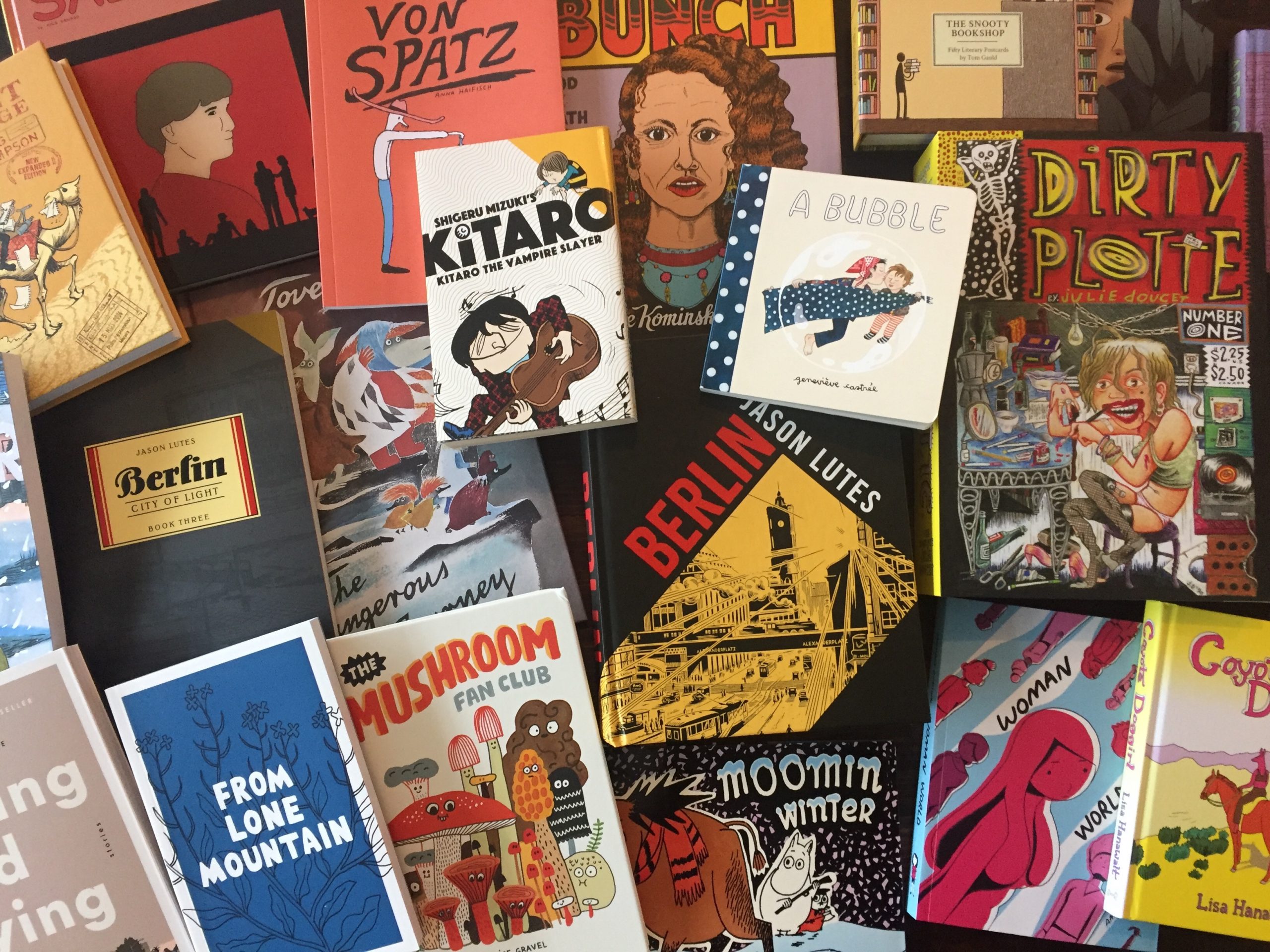 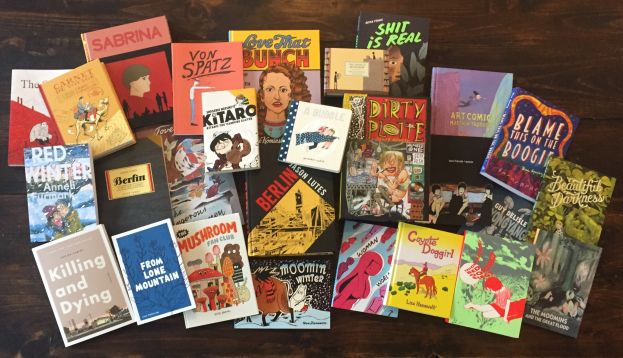 2018 has been an exciting year for books! This year we had the pleasure of publishing 27 of ‘em, 11 books being translations, 4 by Canadians, and 7 reprints.

In 2018 we published numerous career-defining works: beginning with Love That Bunch which presents Aline Kominsky-Crumb’s work from the 1970s up to 2014, then Berlin by Jason Lutes, the meticulously crafted, 20 years in-the-making story of life before the collapse of the Weimar Republic and, of course, Dirty Plotte: The Complete Julie Doucet which collects all of Doucet’s Dirty Plotte issues, My New York Diary, and much more rarely seen work. Each of these books encapsulates their author’s career span, giving a glimpse into how their styles have grown over decades of work.

Nick Drnaso’s Sabrina had the honour of being the first ever graphic novel to be nominated for the Man Booker Prize. The book was widely accoladed, with the New York Times declaring it a “profoundly American nightmare,” and Zadie Smith naming it “the best book—in any medium—about our current moment.” Heralded by the New York Times Book Review and the LA Review of Books, From Lone Mountain by John Porcellino reminded us that nature can serve as an anchor in these politically turbulent times in his “magically minimal style,” as PEN describes it. Jerome Ruillier’s The Strange displays what life is like for undocumented immigrants, a story The Atlantic calls a “remarkable read.” We published two very different love stories in translation that both came heralded by the Guardian: Anneli Furmark’s Red Winter explored 1970s Swedish political turmoil while Aisha Franz’s Shit Is Real looked deep into anxiety and the digital disconnect.

But wait, we published funny books too! Woman World, Aminder Dhaliwal’s post-apocalyptic universe where men have gone extinct was praised by The Hollywood Reporter, Nylon, and NPR, where it was described as, “A remarkably sly and devastating critique of patriarchy,” along with an original comic being featured in The New Yorker. Lisa Hanawalt’s first graphic novel, Coyote Doggirl, was a delight for everyone, but especially the horse girls, and earned praise in Huffington Post, The Atlantic, NPR, and The New Yorker, which calls the book, “An introvert’s paean to the pleasures of being alone.” Similarly hilarious and offbeat are Von Spatz by Anna Haifisch, which i09 praised for its “puckish sensibilities” and the “raw, bizarre meditation on why we idiot humans bother to create anything” (Vulture) that is Art Comic by Matthew Thurber.

2018 also brought plenty of titles for our young readers. The Mushroom Fan Club will make a fungi scavenger out of us all, and we can find plenty of comparatively high-stakes adventure in Kitaro The Vampire Slayer, and the new paperback edition of Beautiful Darkness. Genevieve Castree’s board book A Bubble delicately presents death to young readers with grace and sensitivity. And Moomin fans young and old can appreciate our new edition of Moomin Winter, along with reprints of the first and last Moomin stories written by Tove Jansson, The Moomins and the Great Flood and The Dangerous Journey respectively.

Publishers Weekly beat every other publication to it and already released their Best of 2018 list which ranks Bad Friends by Ancco as one of the top five graphic novels of the year! When it’s released on November 6, Rina Ayuyang’s Blame This on the Boogie will make readers everywhere swoon with its bold use of colour and “big-hearted charm,” as Daniel Clowes put it. 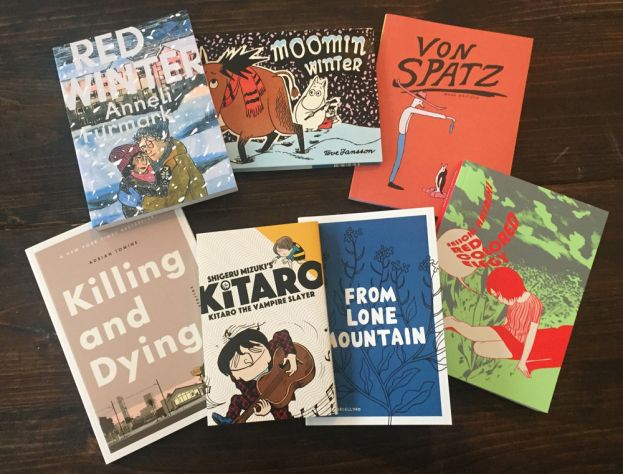 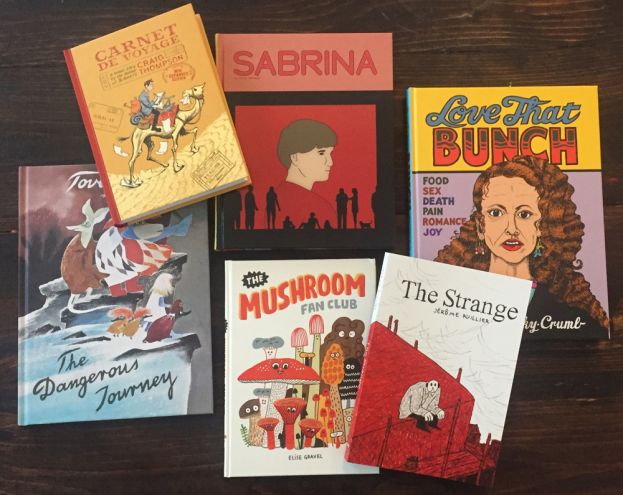 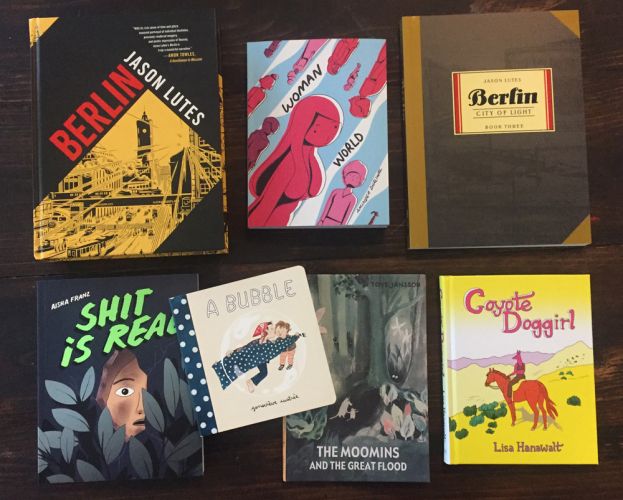 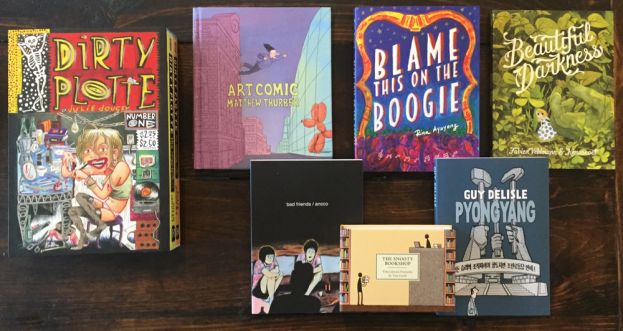 Beautiful Darkness is out now in paperback!

New paperback releases of Pyongyang by Guy Delisle and Beautiful Darkness by Fabien Vehlmann and Kerascoet, coming this fall! These are…