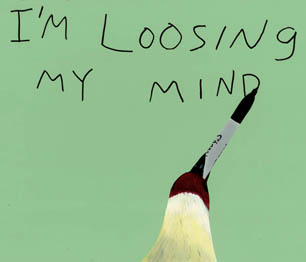 Dumontier & Farber (and the rest of that Royal Art Lodge)

I hear ya, my little chirpy friend. Me, too.

Galerie Division is proud to reunite five of the original members of the Royal Art Lodge. This collective of artists was founded in 1996 by Michael Dumontier, Marcel Dzama, Neil Farber, Drue Langlois, Jonathan Pylypchuk, and Adrian Williams in Winnipeg, and was known for its playful and caustic art works. Working especially on small format pieces during their weekly meetings, the members of the group alternated their interventions on the same media support and any topic was open to be explored.

Indeed the members of the group did not hesitate to tackle subjects as strenuous as death, religion or depression. They succeeded none the less in infusing a certain scathing sense of humour and naivety in their works, thanks to a style and iconography they achieved and made their own. The vivid and clear colors, the naive and almost childlike drawings and the texts inspired by popular culture and folklore reduced the heaviness of the subjects they approached.

The works of the Royal Art Lodge have been exhibited in England, Spain, Italy, Ireland, Korea, France and the United States, namely in the Los Angeles Museum of Contemporary Art and at The Drawing Center in New York. Their works are part of many public and private collections, including that of Canada’s National Gallery which holds approximately 300 of their drawings.

The exhibition “After the Royal Art Lodge” will be held at Galerie Division from March 16th to May 11th and will feature the collaborative works of Michael Dumontier and Neil Farber, as well as the individual works of Marcel Dzama, Adrian Williams and Jonathan Pylypchuk, who will hold a seminar open to the public on Friday, March 15th from 1:30 PM to 3PM. Pylypchuk will discuss the themes tackled in his body of works and how it has evolved since the end of the group.

Galerie Division invites the public to the opening of the exhibition on March 16th from 2PM to 5PM.