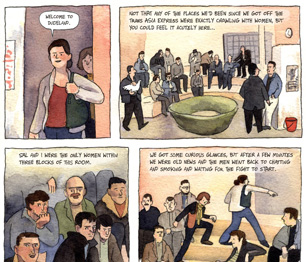 “There is an honest simplicity in Sarah’s approach that makes you trust her–it draws you in. She’s not out for grand truths or over-the-top laughs,” said Devlin. “She crafts subtle and rich stories by asking questions but not demanding answers. She brings you along on her search. You learn with her. It’s an exciting approach to comics journalism.“

To be released in Fall 2014, ROLLING BLACKOUTS follows Glidden to the Middle East with friends from a journalist collective, traveling to Turkey, Iraq, Syria and Lebanon. Glidden draws the portrait of a relationship between two childhood friends; one who is a journalist staunchly opposed to the Iraq war and the other a Marine who fought in the war. In doing so, Glidden explores the legacy of the war in Iraq and how it has changed people’s lives, throughout the region and back at home.

With only a few mini-comics under her belt, Glidden made the auspicious debut HOW TO UNDERSTAND ISRAEL IN 60 DAYS OR LESS and instantly was on everyone’s radar as a cartoonist to watch. This memoir about her Birthright Trip to Israel won an Ignatz Award when serialized as a minicomic in 2008 and was published as a graphic novel in 2010 in six languages. Her short pieces of graphic journalism have been published in print and online on Cartoon Movement, Ha’aretz, Symbolia Magazine, and the Jewish Quarterly. In 2012, she was an artist in residence at the Maison des Auteurs in Angoulême, France and she was honored with the Maisie Kukoc Award for Comics Inspiration. Her website is www.sarahglidden.com.

ROLLING BLACKOUTS will be distributed in the U.S. by Farrar, Straus & Giroux and in Canada by Raincoast Books. International rights are represented by Samantha Haywood of the Transatlantic Literary Agency. Glidden was represented by Bob Mecoy of Creative Book Services in negotiations. ###

The Return of our San Diego Report

We had such a great time at Comic-con this year, we want to tell the whole world about it, so I…

SDCC begins this week folks! We’ve already shown you our programming slate, so now check out our excellent debuts. First up,…

We’re very excited to be exhibiting at the 6th annual East London Comic Arts Festival this coming June 16, 17 and 18 in…