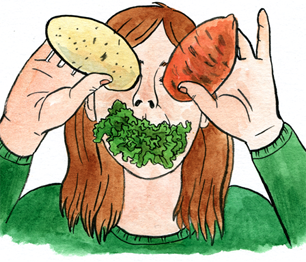 D+Q to Publish MY DIRTY DUMB EYES by Lisa Hanawalt

Drawn & Quarterly has acquired world rights to MY DIRTY DUMB EYES by award-winning cartoonist Lisa Hanawalt, it was announced today by Tom Devlin, Acquiring Editor & Creative Director. To be released in Spring 2013, MY DIRTY DUMB EYES is Hanawalt’s first full length work. It will be a collection of her intricately detailed, absurdly funny comics that have appeared in The Hairpin, VanityFair.com, Lucky Peach, Saveur, The New York Times and The Believer.

“We have been fans of Lisa for a very long time, she is the great combination of excellent drawing ability and being genuinely laugh out loud funny,” said Devlin. “Her unhinged musings on pop culture and celebrity make her the premiere humorist for her generation. She approaches her subjects with both a stalker’s wild-eyed mania and a satirist’s precise control.”

MY DIRTY DUMB EYES will be distributed in the U.S. by Farrar, Straus & Giroux and in Canada by Raincoast Books. International rights are represented by Samantha Haywood of the Transatlantic Literary Agency. Meredith Kaffel of DeFiore and Company represented Hanawalt in negotiations.

About Lisa Hanawalt: Lisa Hanawalt self-published Stay Away From Other People in 2008 and established her comic-making style of funny illustrated lists and anthropomorphized animals, which she continued to explore in her first published work, I Want You #1 (Buenaventura Press, 2009) and I Want You #2 (Pigeon Press, 2010). Stay Away From Other People won an Ignatz for Outstanding Mini-Comic in 2009, I Want You #1 received an Ignatz for Outstanding Comic in 2010, and I Want You #2 won a Stumptown Award for Best Small Press in 2011.

Hanawalt draws illustrations and funnies for places like The New York Times, New York Magazine, The Hairpin, McSweeneys, Chronicle Books and Vanity Fair. She recently illustrated a children’s book for McSweeney’s, Benny’s Brigade, with Arthur Bradford and is coming out in August 2012.

Hanawalt was raised in Palo Alto, California, and graduated from UCLA in 2006. She currently lives in Greenpoint, Brooklyn with a dog and a comedian.

I Want You by Lisa Hanawalt