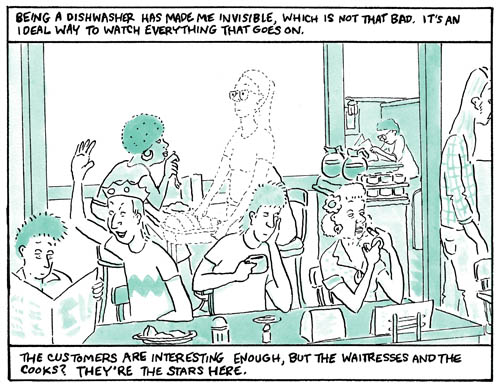 As announced over at the Comics Reporter, we are thrilled to have the following formal announcement.

As announced over at the Comics Reporter, we are thrilled to have the following formal announcement.

D+Q has acquired world rights to the graphic novel memoir, Over Easy, by cartoonist Mimi Pond, it was announced today by Chris Oliveros, Editor-in-Chief and Publisher of Drawn & Quarterly. Over Easy is a coming-of-age story of a young artist, set against the backdrop of the burgeoning punk-rock scene and moral disenchantment of the late 1970’s in Oakland, California, an environment in which she must sort out the good and the bad in the people she comes to love. The Acquiring Editor is Tom Devlin.

“In this day and age of the graphic novel, It’s astonishing to come across a fully-realized and seasoned cartoonist who has yet to release comics in long-form,” said Devlin. “Mimi’s cartooning is loose and expressive and her viewpoint of a counter culture sliding from hippy burnout to punk explosion is uniquely her own.”

Pond is best known for her television writing where she wrote for the first full length episode of the Simpsons, “Simpsons Roasting on an Open Fire” in 1989 as well as for television shows “Designing Women” and “Pee Wee’s Playhouse”. She has created comics for the Los Angeles Times and Seventeen Magazine and has authored several humor books. She lives in Los Angeles.

Paul Bresnick of the Bresnick Agency represented Pond in negotiations. Over Easy will be published in North America by D+Q and will be distributed in the U.S. by Farrar, Straus & Giroux and in Canada by Raincoast Books. International rights will be represented by Samantha Haywood of the Transatlantic Literary Agency.