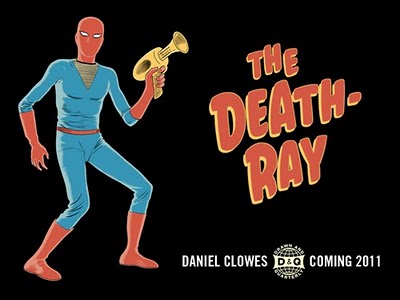 As reported on the Comics Reporter, Drawn & Quarterly has acquired world rights to Daniel Clowes’ Eisner, Harvey and Ignatz winning comic, The Death-Ray, it was announced today by Chris Oliveros, Editor-in-Chief, Acquiring Editor and Publisher of Drawn & Quarterly.

As reported on the Comics Reporter, Drawn & Quarterly has acquired world rights to Daniel Clowes’ Eisner, Harvey and Ignatz winning comic, The Death-Ray, it was announced today by Chris Oliveros, Editor-in-Chief, Acquiring Editor and Publisher of Drawn & Quarterly.

“The Death-Ray is one of the most perfect and fully realized comics of the past decade and it is nothing short of the highest honour to publish,” said Chris Oliveros, Editor-In-Chief and Publisher of Drawn Quarterly. “The story of the alienated Andy is drawn and written to perfection with Dan’s signature subtle humour, stylistic eloquence, and understated social commentary–showcasing all of the hallmarks of why Dan is one of the preeminent cartoonists of the comics medium.”

The Death-Ray will be in stores in Fall 2011 as a hardcover graphic novel. It is the story of the teen outcast Andy, an orphaned nobody with only one friend, the obnoxious-but-loyal Louie. They roam school halls and city streets, invisible to everyone but bullies and tormentors, until the glorious day when Andy takes his first puff on a cigarette. That night he wakes, heart pounding, soaked in sweat, and finds himself suddenly overcome with the peculiar notion that he can do anything. Indeed, he can and as he learns the extent of his new powers, he discovers a terrible and seductive gadget – a hideous compliment to his seething rage – that forever changes everything. The Death-Ray utilizes the classic staples of the superhero genre – origin, costume, ray-gun. sidekick, fight scene – reconfiguring them in a story that is anything but morally simplistic. With subtle comedy, deft mastery and an obvious affection for the bold Pop Art exuberance of comic book design, Daniel Clowes delivers a contemporary meditation on the the darkness of the human psyche.

Nicole Aragi represented Clowes in negotiations. The Death-Ray will be published in North America by D+Q and will be distributed in the U.S. by Farrar, Straus & Giroux and in Canada by Raincoast Books. International rights excluding France will be represented by Samantha Haywood of the Transatlantic Literary Agency.

Motion-picture rights to The Death-Ray are in development with Jack Black’s Electric Dynamite Productions, with noted director Chris Milk attached to direct.

And now, onto the spring list! We have a lot of great stuff coming your way, world! So get ready for…