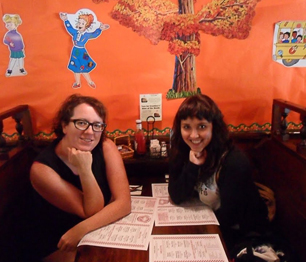 A couple weeks ago the D+Q girl gang–Peggy Burns, Julia Pohl-Miranda, and myself–rented a sports car, took the top off, and cruised to New York with our hair blowing in the wind, leaving all our cares behind in a cloud of dust.

A couple weeks ago the D+Q girl gang–Peggy Burns, Julia Pohl-Miranda, and myself–rented a sports car, took the top off, and cruised to New York with our hair blowing in the wind, leaving all our cares behind in a cloud of dust. {Note: It was more of a sedan than a sports car, per se, and none of those other things are true either.} The purpose of the trip was to launch Rookie Yearbook One. Julia will share all Rookie related photos with you later this week, but in the meantime, we had a lot of non-Rookie fun, too, so I’ll share that with you now.

Pictured above: Breakfast in Albany at Peggy’s old late night college diner. On a scale of one to ham, it scored a 10. 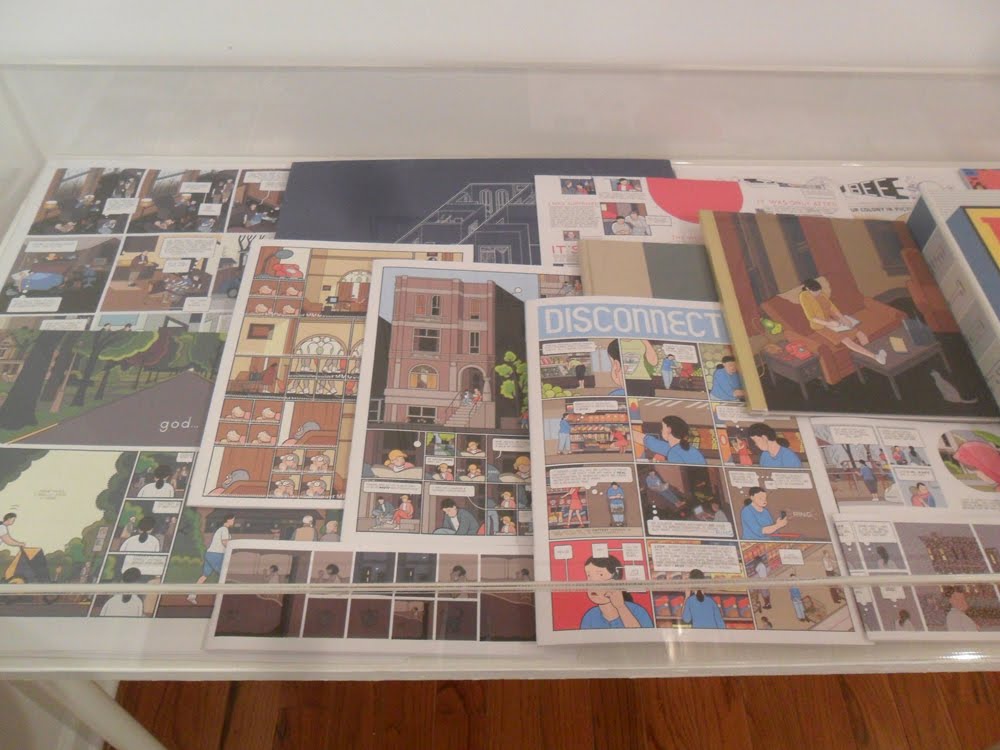 One of the highlights of the week was getting to go to the opening reception of Chris Ware’s Building Stories exhibit at Adam Baumgold’s gallery. The event was so packed that Julia and I had to sneak back later on in the week to get a better look at everything. 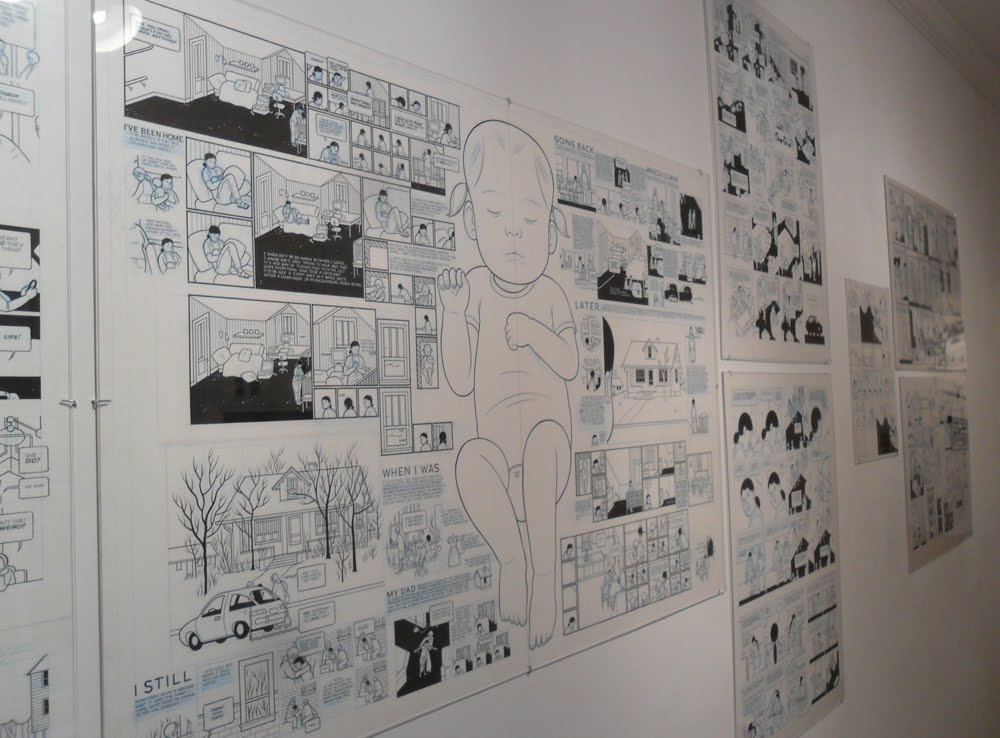 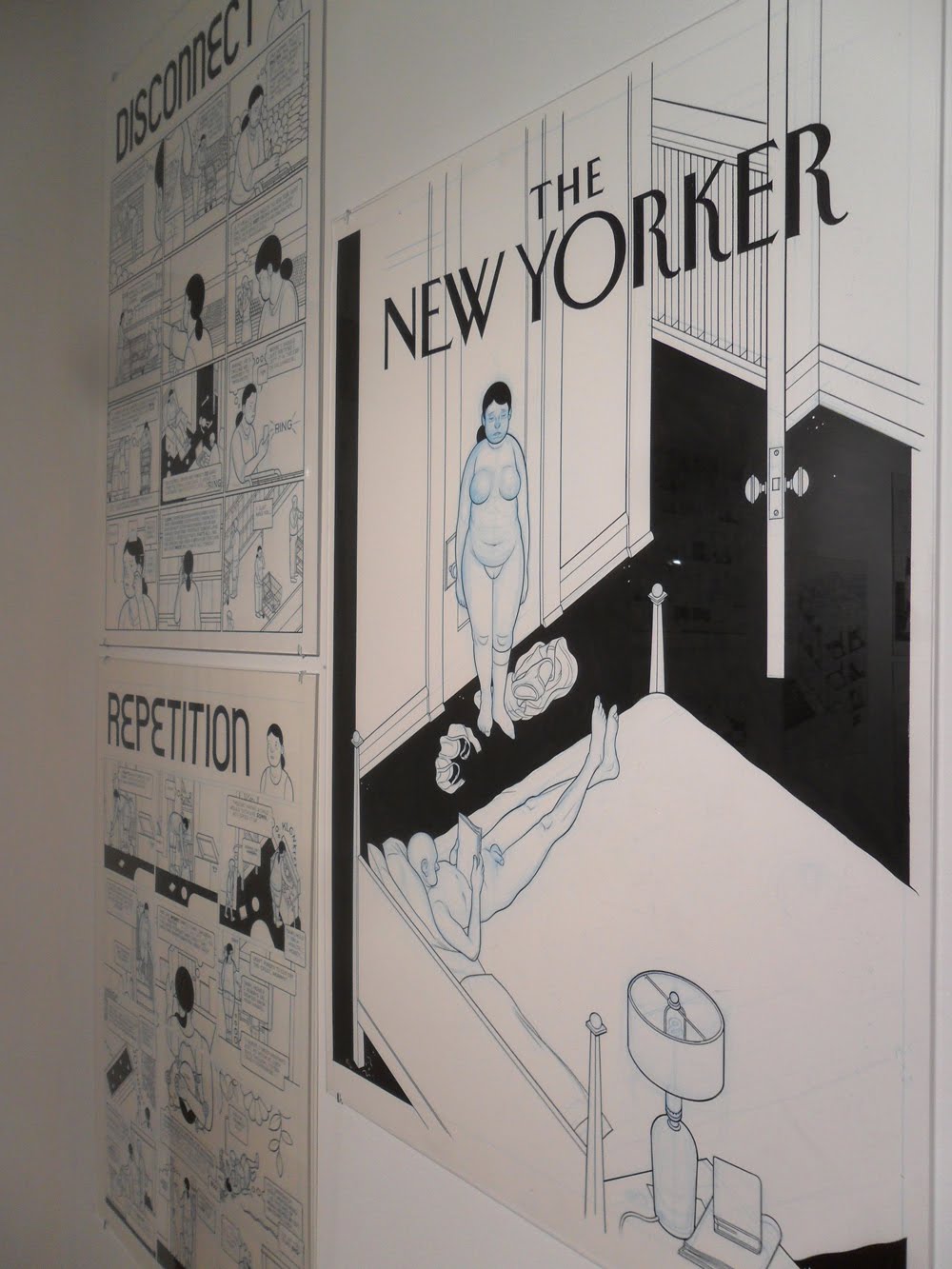 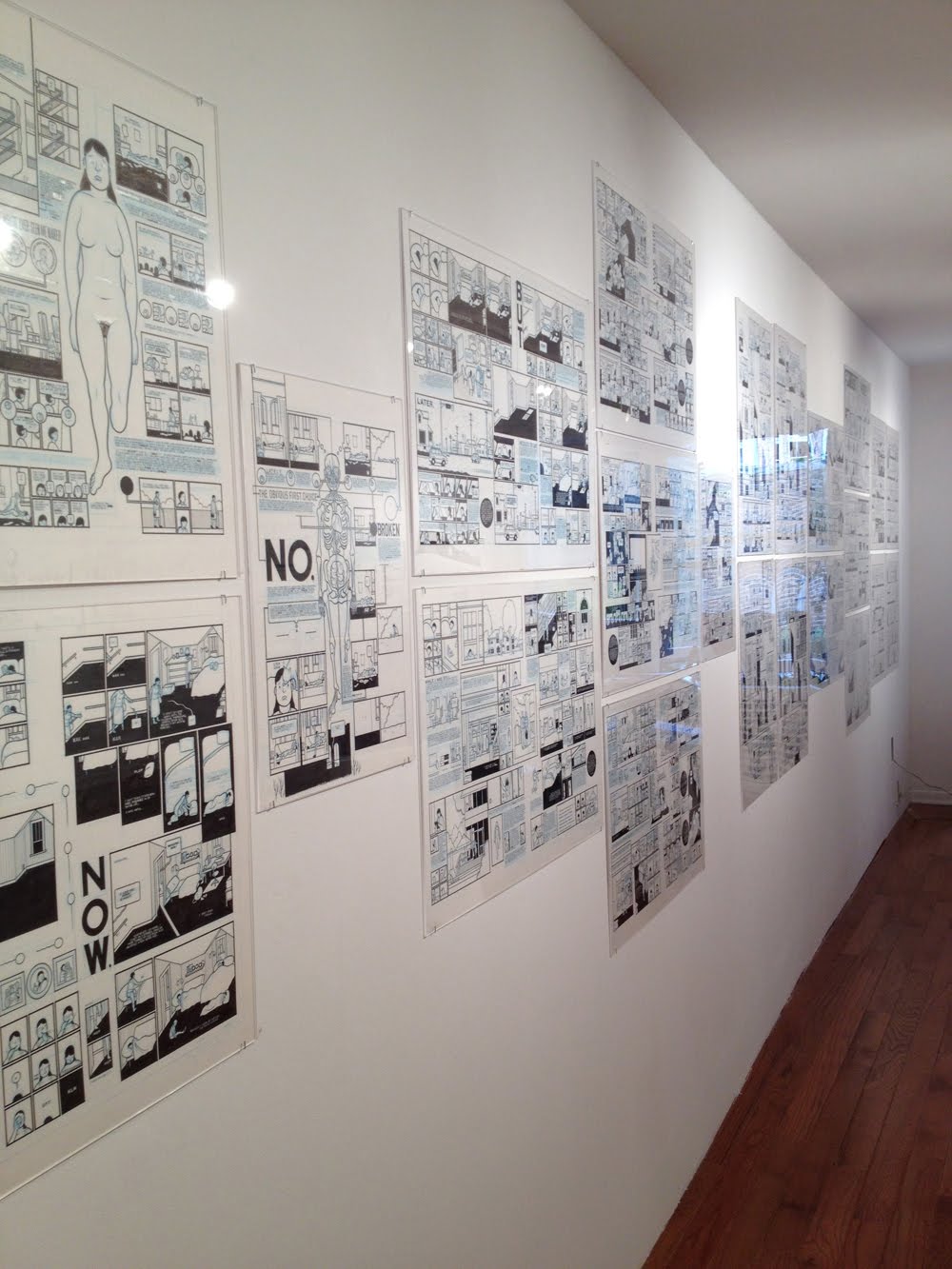 Neither Julia or I had seen Chris’s originals before, so it was a real treat, to say the least. 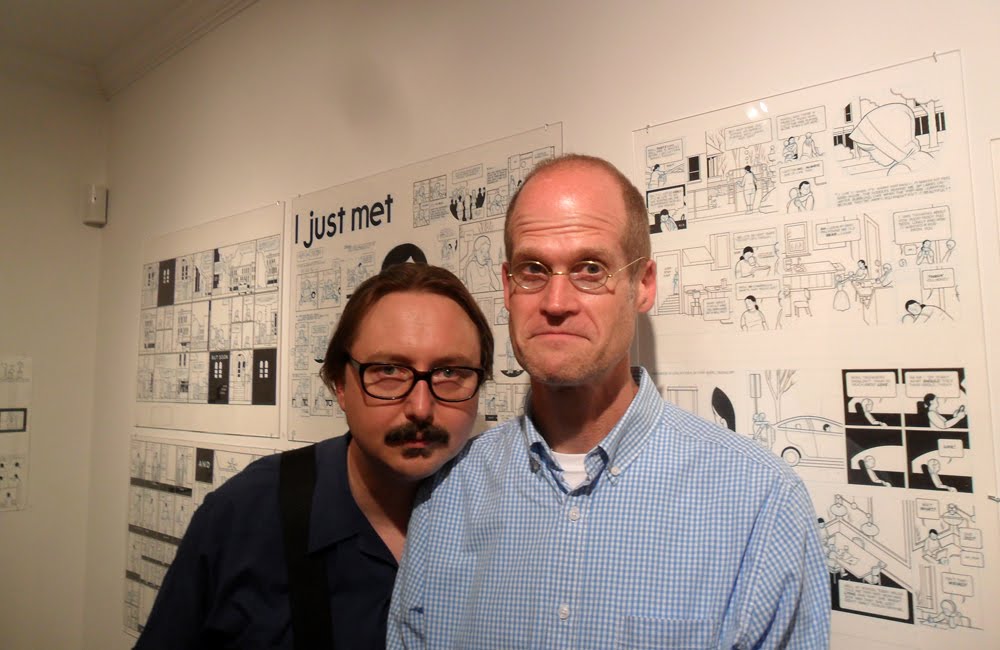 Chris with comics-fan and friend of D+Q John Hodgman. Later on Julia had an argument with John about monarchs, specifically about how Queen Victoria was the worst of them all. 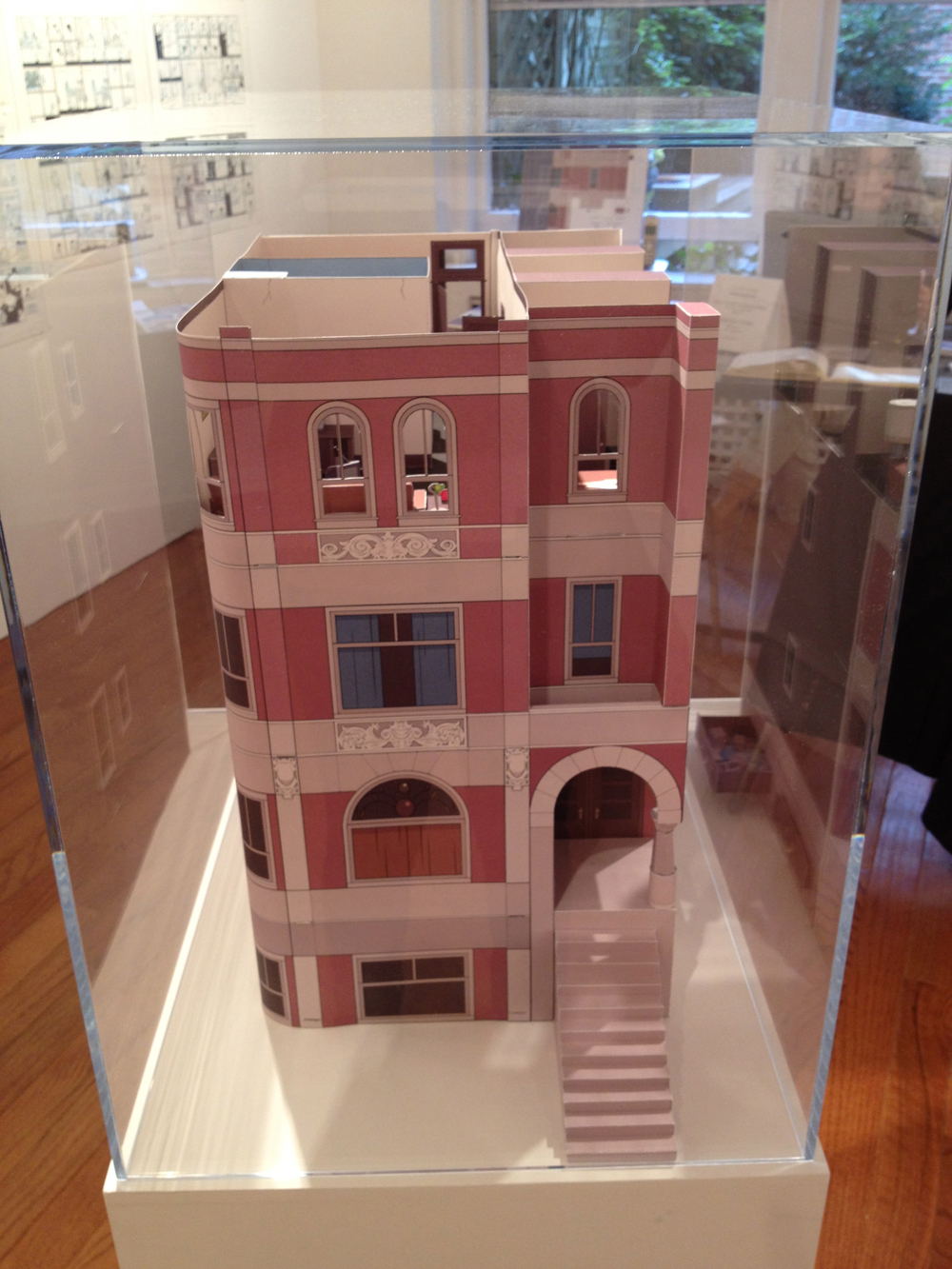 The constructed model! This is one of two models that Chris assembled himself. 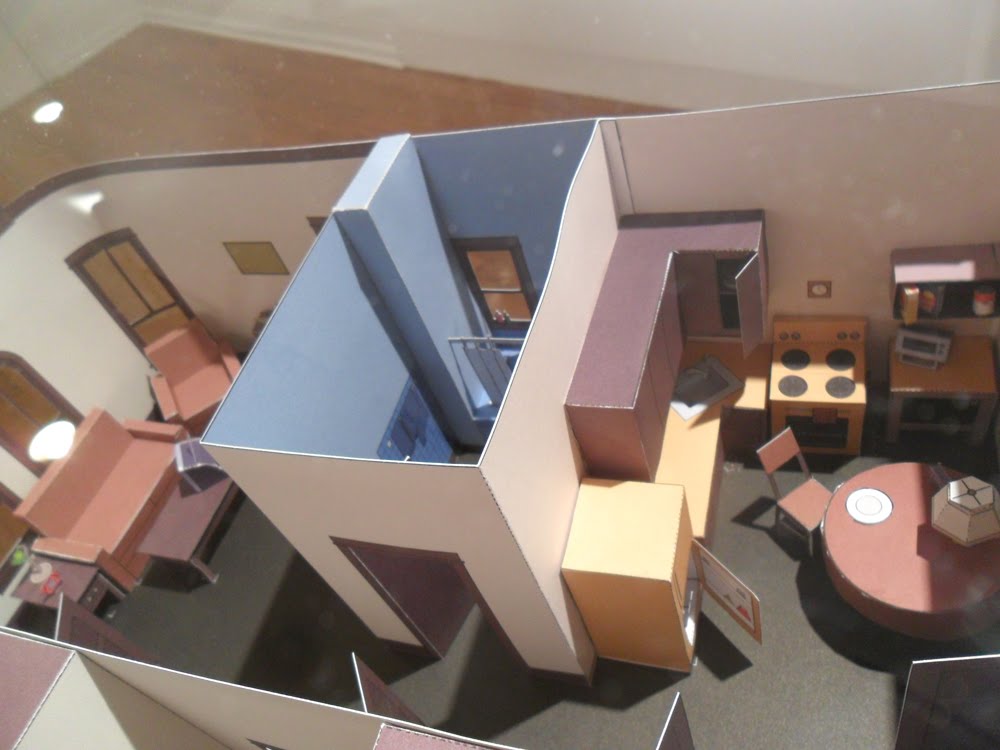 I took about a million more photos of this thing, but since we’ve blogged shots of the office model already, I’ll just leave you with these. 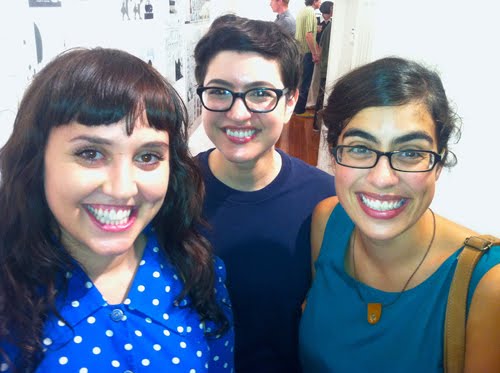 Pictured above is myself, Anaheed Alani, Rookie‘s very skilled Editorial Director, and Julia. Anaheed is a friend of Chris’s so we met her, for the first time, at the reception. {I had to resist the urge not to photoshop glasses on myself here.}

Congrats on the show, Chris! If you live in or around New York and haven’t been yet, it’s up until October 27th! Take the necessary steps to get there. You won’t regret it. Here’s the info. 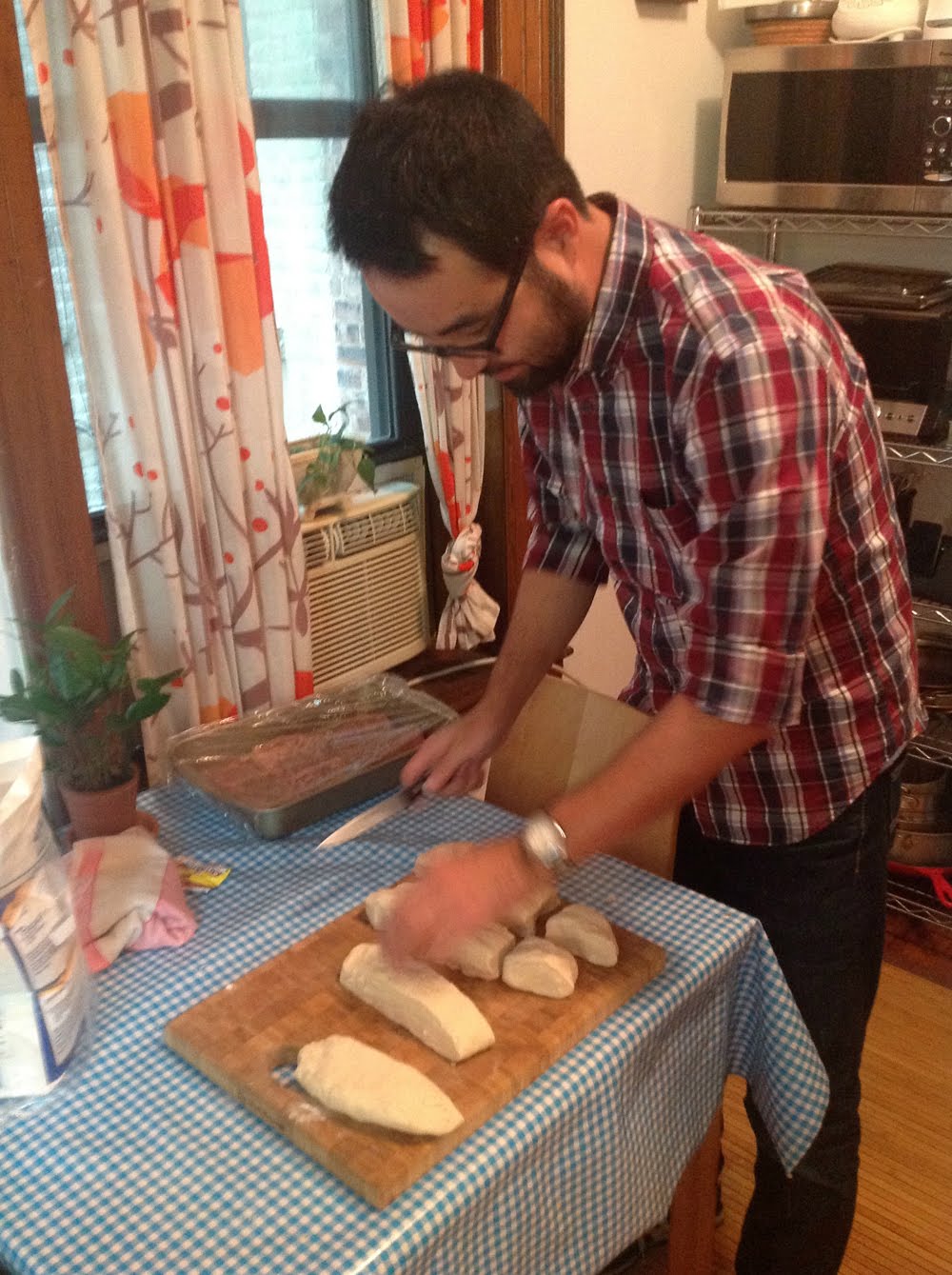 Later on in the week we had lunch with Adrian Tomine and his family. Adrian, Sarah, and Nora were wonderful hosts. 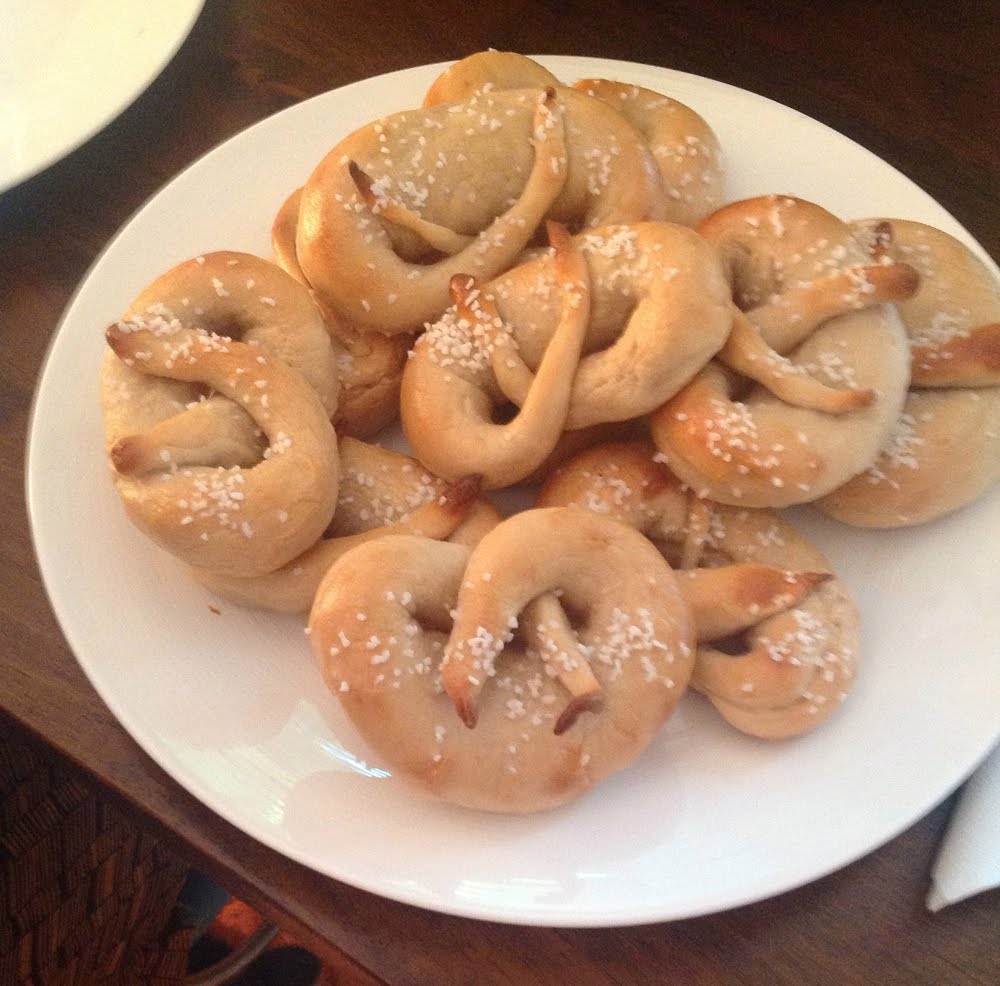 Adrian made us pretzels! If I’m not mistaken, the recipe came from Jonathan Bennett’s grandmother. Now I’ve never had homemade pretzels before, but I’m pretty sure these were the best. {Adrian, this is your cue to send Tom the recipe so he can make them for sandwich club. Say what?!? A sandwich made out of a pretzel? Yeah. Think about it. And then go buy yourself some ham to put in your pretzel sandwich.} 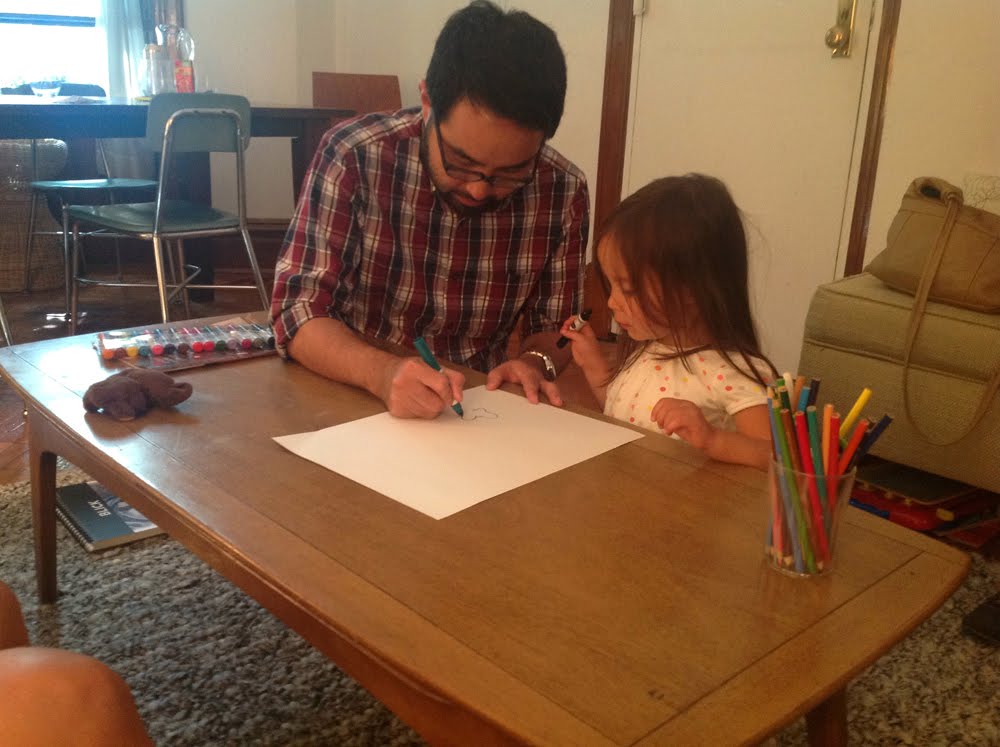 Lunch was followed by some live drawing! Nora: Seriously, kid, You. Are. The. Most. Adorable. 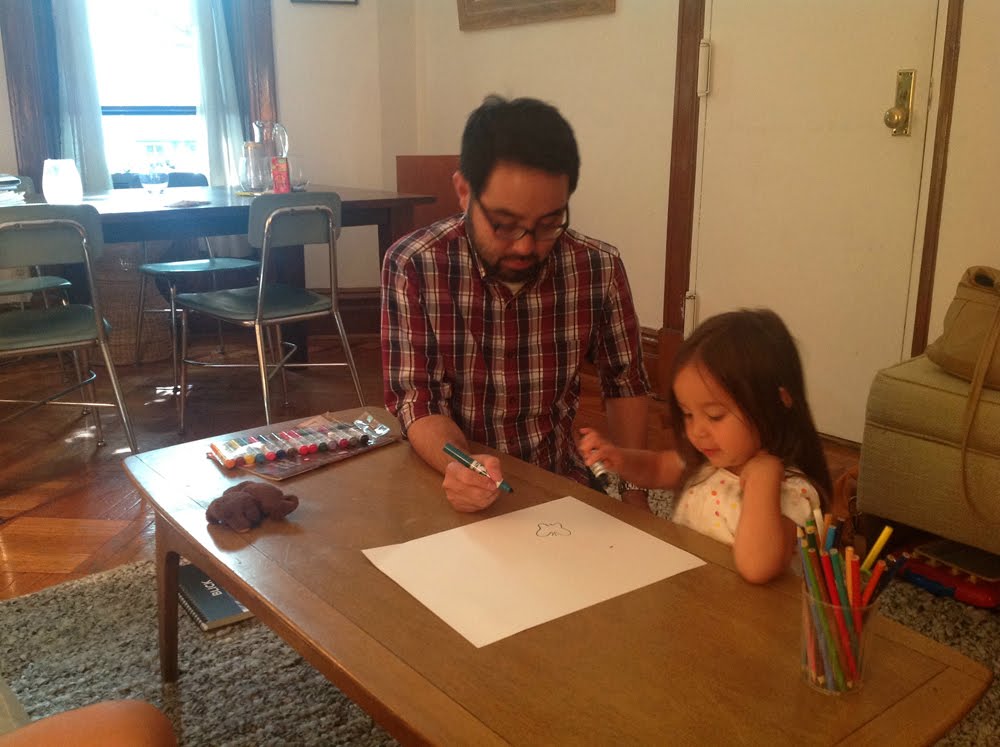 Not pictured here: At one point during the boring adult conversation, Nora disappeared and came back giggling and wearing a pair of Adrian’s socks. I don’t think I need to editorialize here, but I will anyway: ADORABLE. 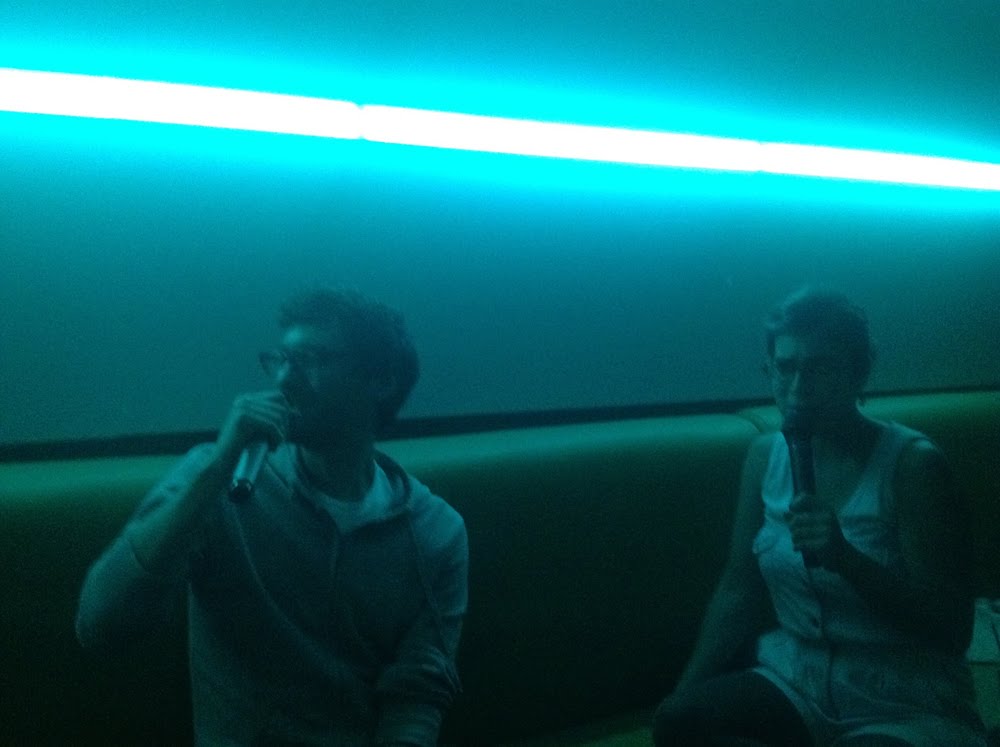 Later on we had a lovely Korean dinner with Jillian Tamaki, which was followed by karaoke! Here’s Julia doing a duet with Jillian’s husband, Sam Weber, who happens to be surprisingly good at rapping. 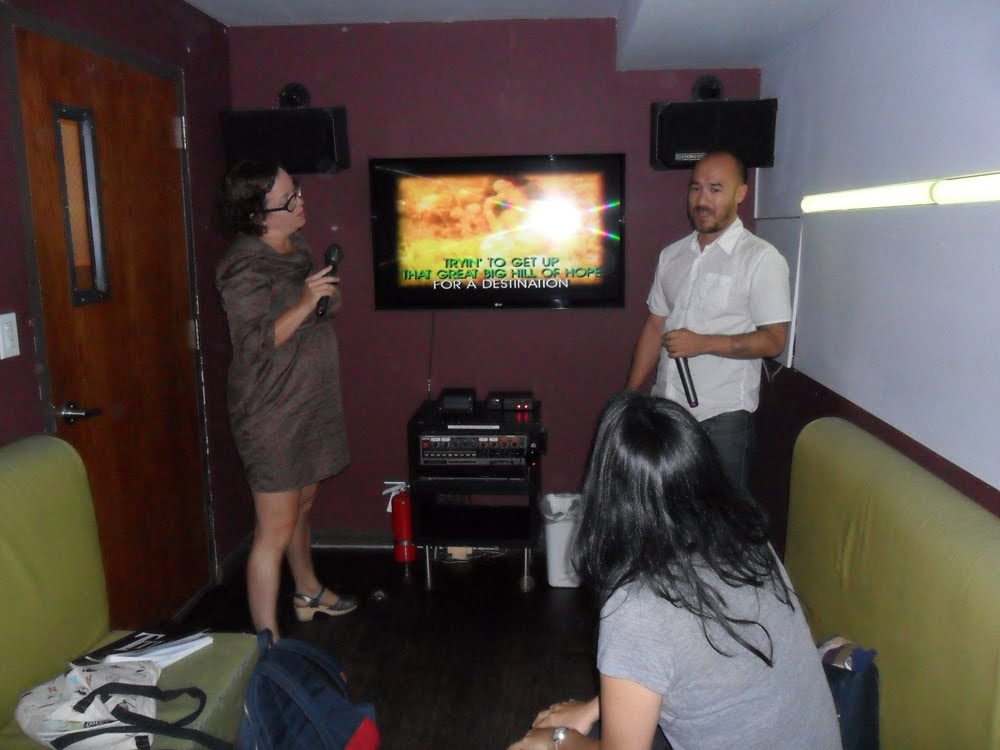 And here’s Peggy with Sam’s friend Josh Cochran doing an awkward karaoke battle. They had both selected the same song and the entire time both thought that the other was trying to pinch them out of their own song. Nope. Just both into 4 Non Blondes. Needless to say, IT GOT HEATED. Also pictured: Jillian’s luscious locks. 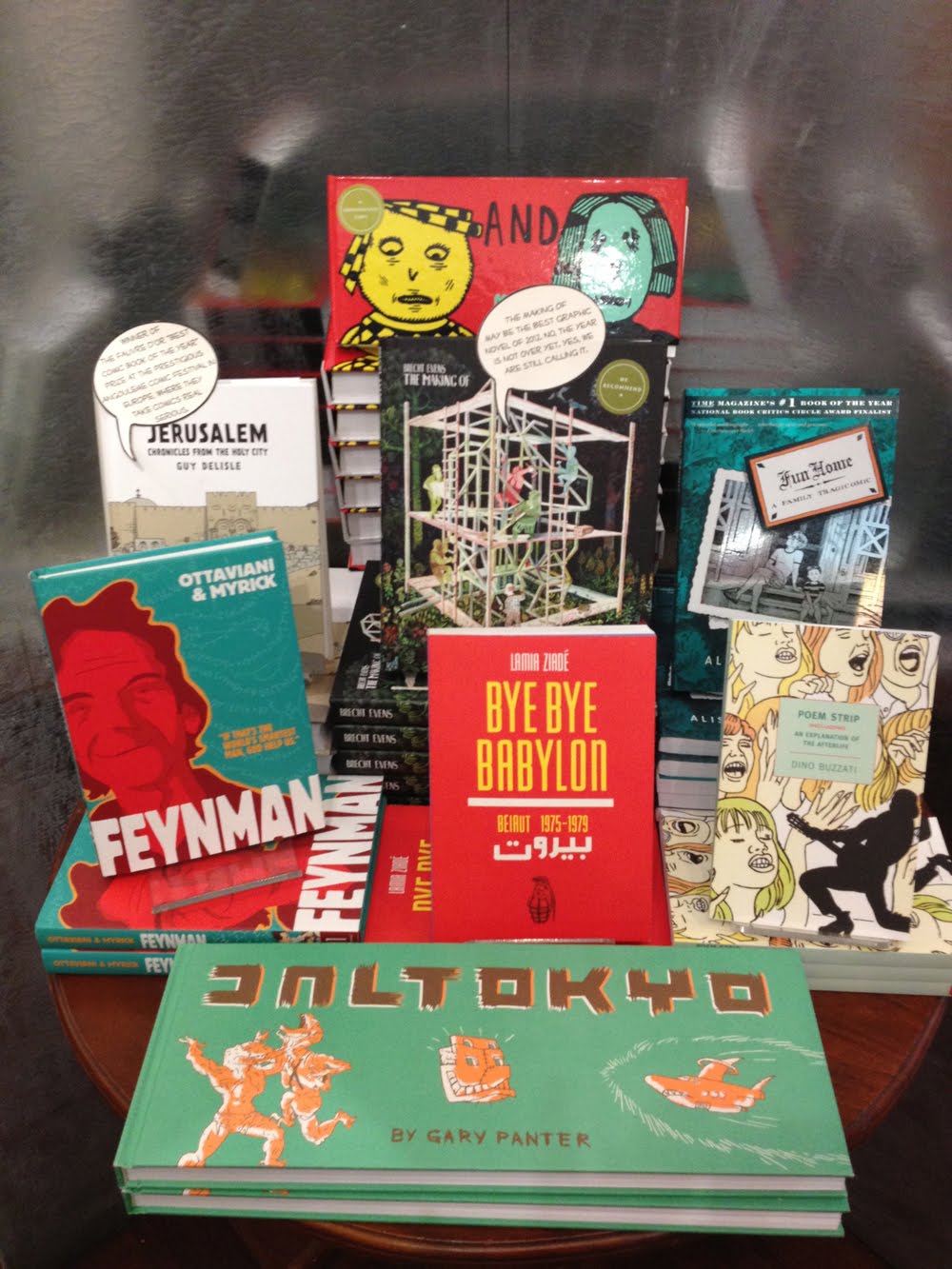 And lastly, because we like to photograph D+Q books in the wild, here’s two of our books prominently displayed at McNally Jackson. You can’t read this because it’s really tiny, but the note on The Making Of says, “The Making Of may be the best graphic novel of 2012. No, the year is not over yet. Yes, we are still calling it.” Agreed! I do not remember what the note on Jerusalem said exactly, but it was something along the lines of, “This book is very good.” Agreed!

Stay tuned for D+Q Girl Gang Gets Real in NYC: Rookie Edition, coming later this week from the beautiful and talented Julia Pohl-Miranda!