Dan & Seth visited Montreal, and now we’re all in a funk.

Was it really just a week ago that Dan and Seth visited Montreal. Sigh. Yes. 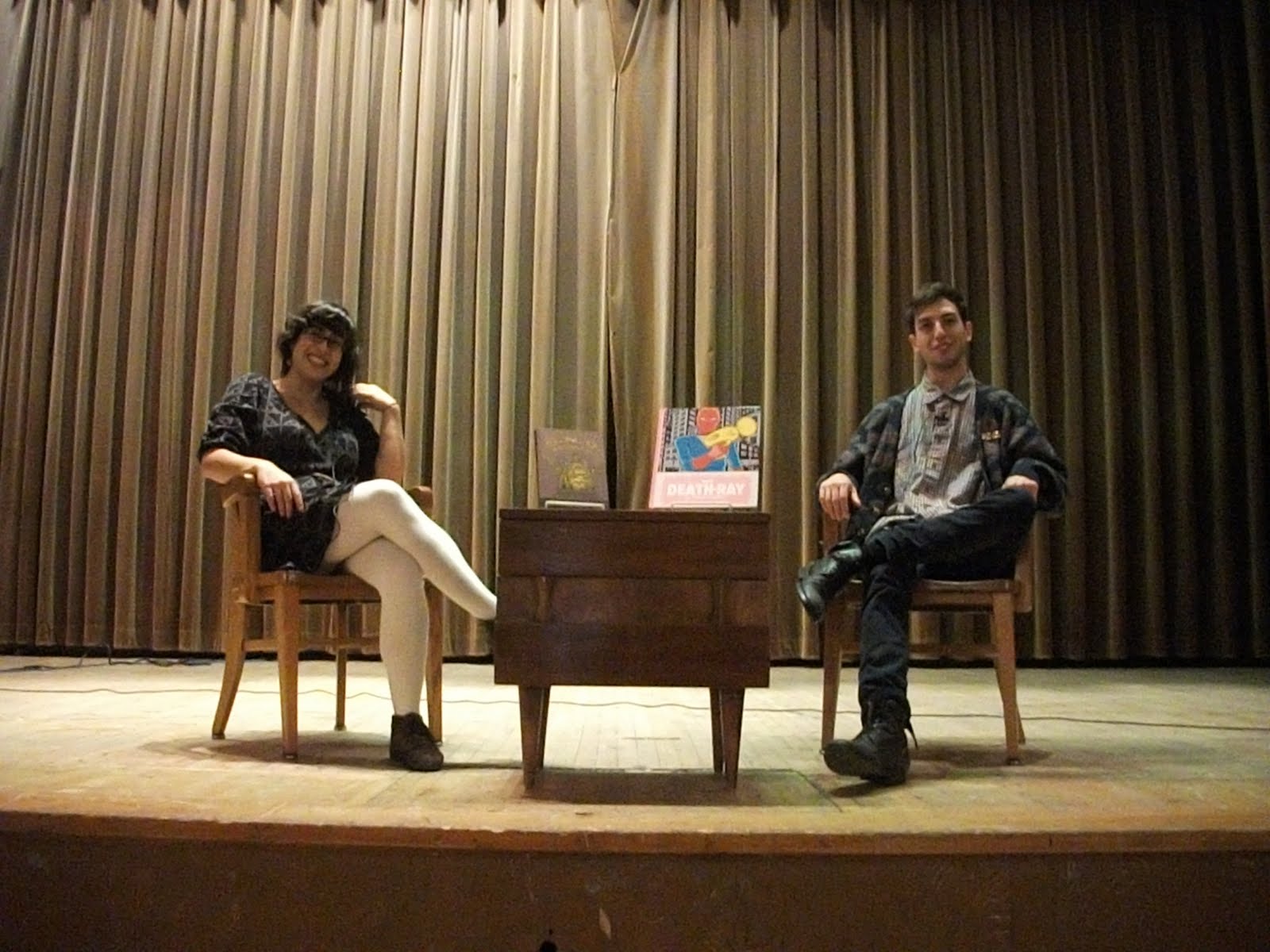 Wait a minute. That’s not Dan and Seth, that’s Julia and Julien at the sound check. 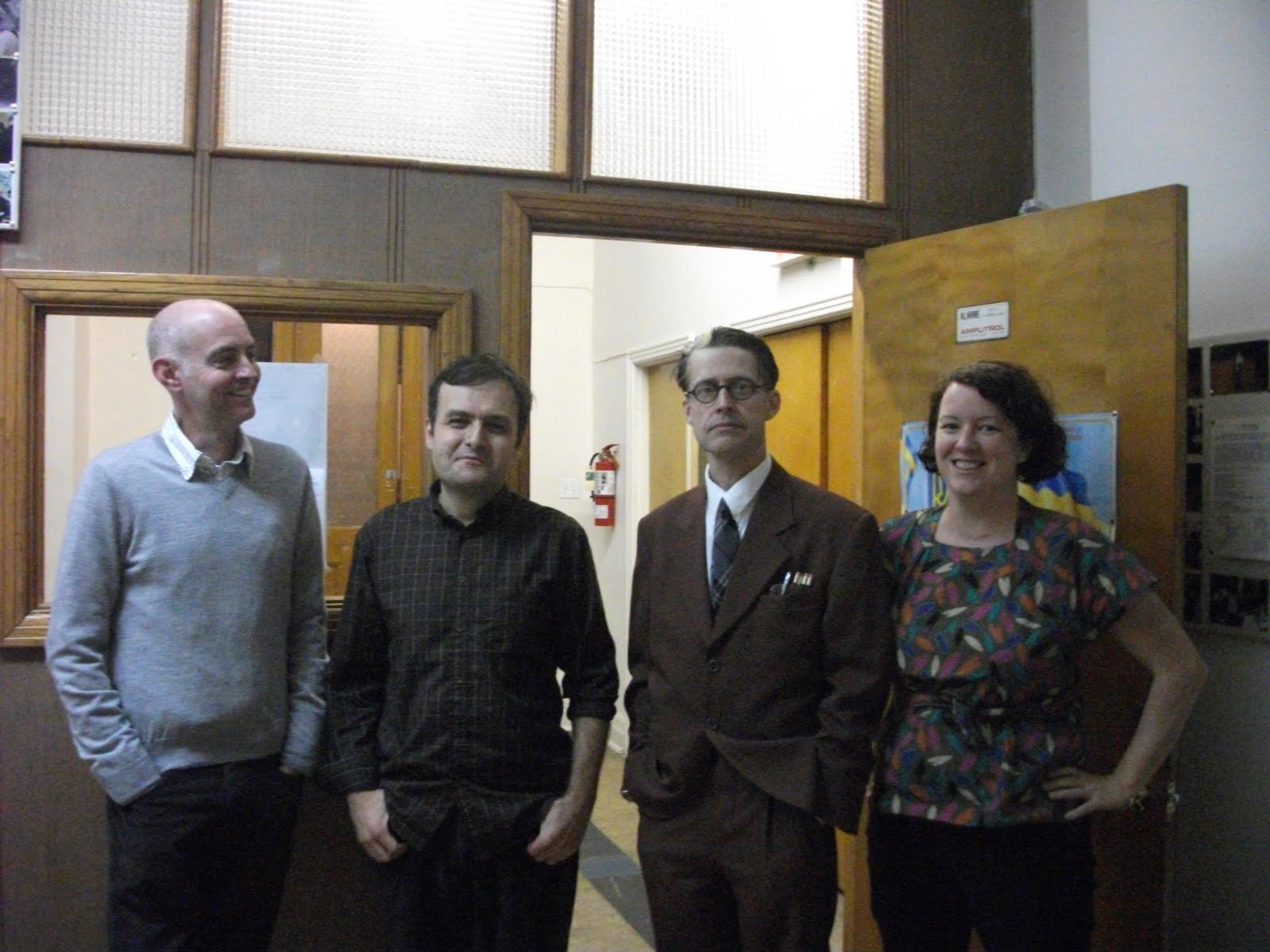 Oh there they are, backstage. Seth didn’t find my “I only like living cartoonists” story funny. Dan did, though. 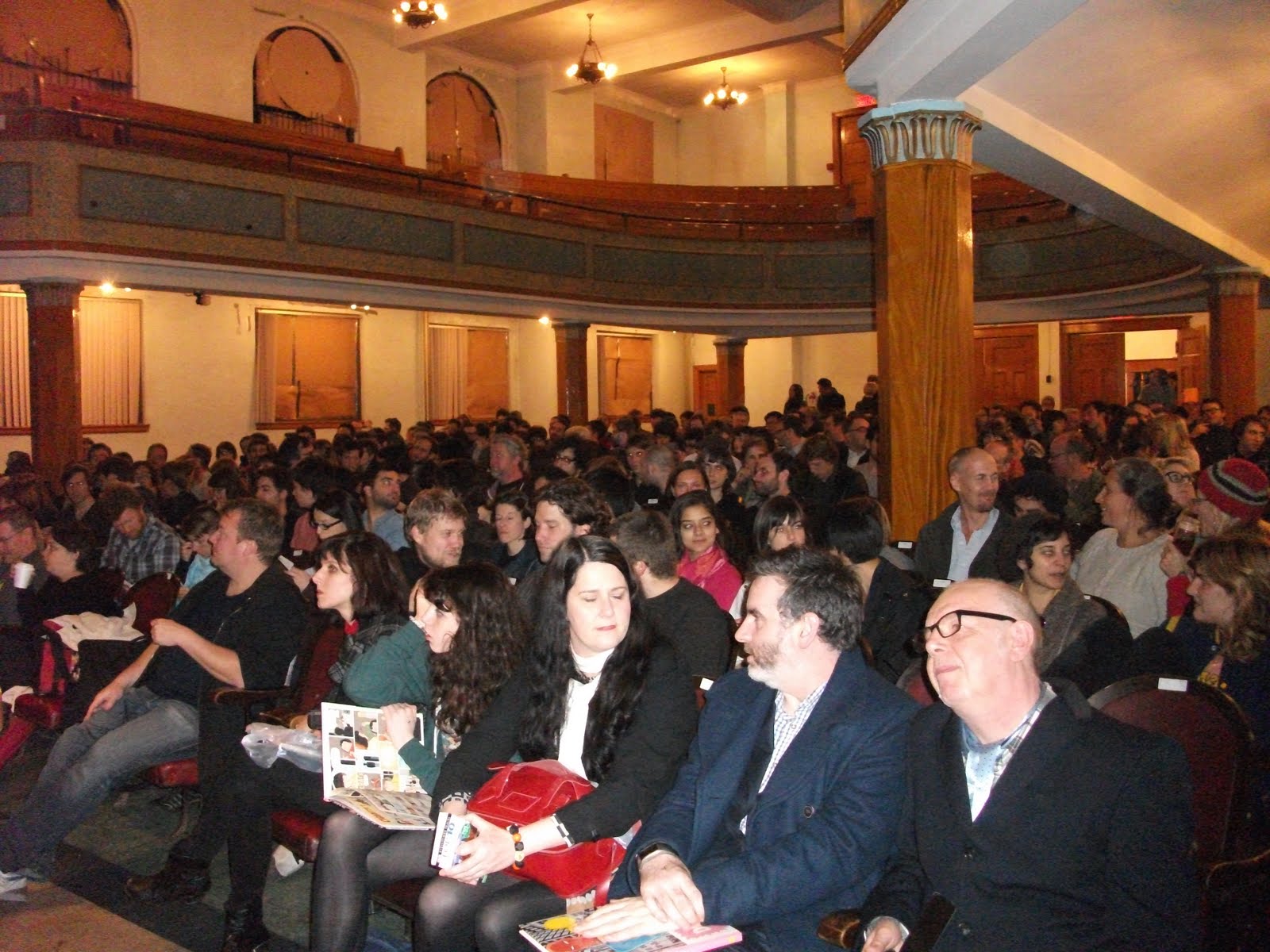 A 350+ crowd assembles outside. 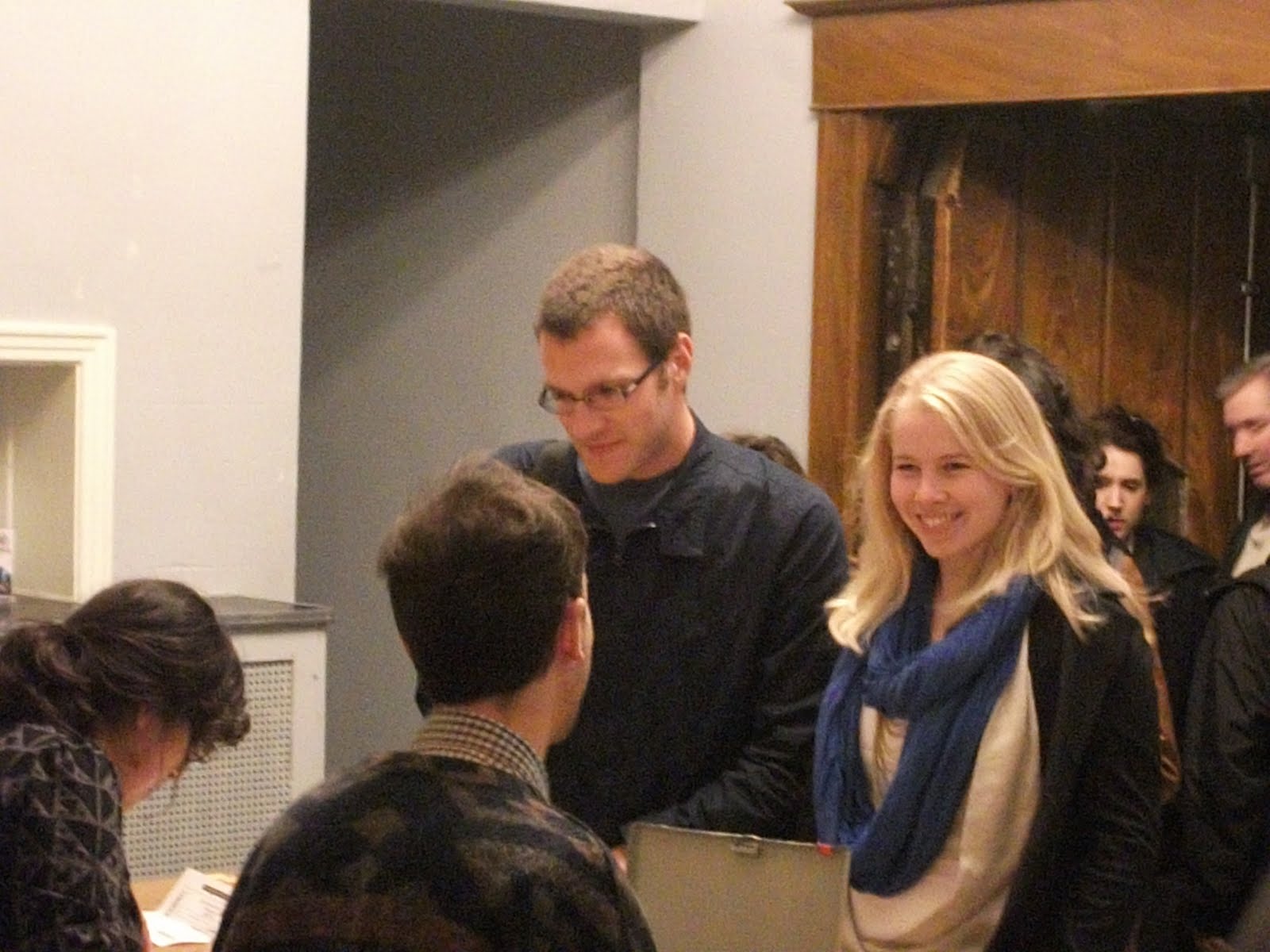 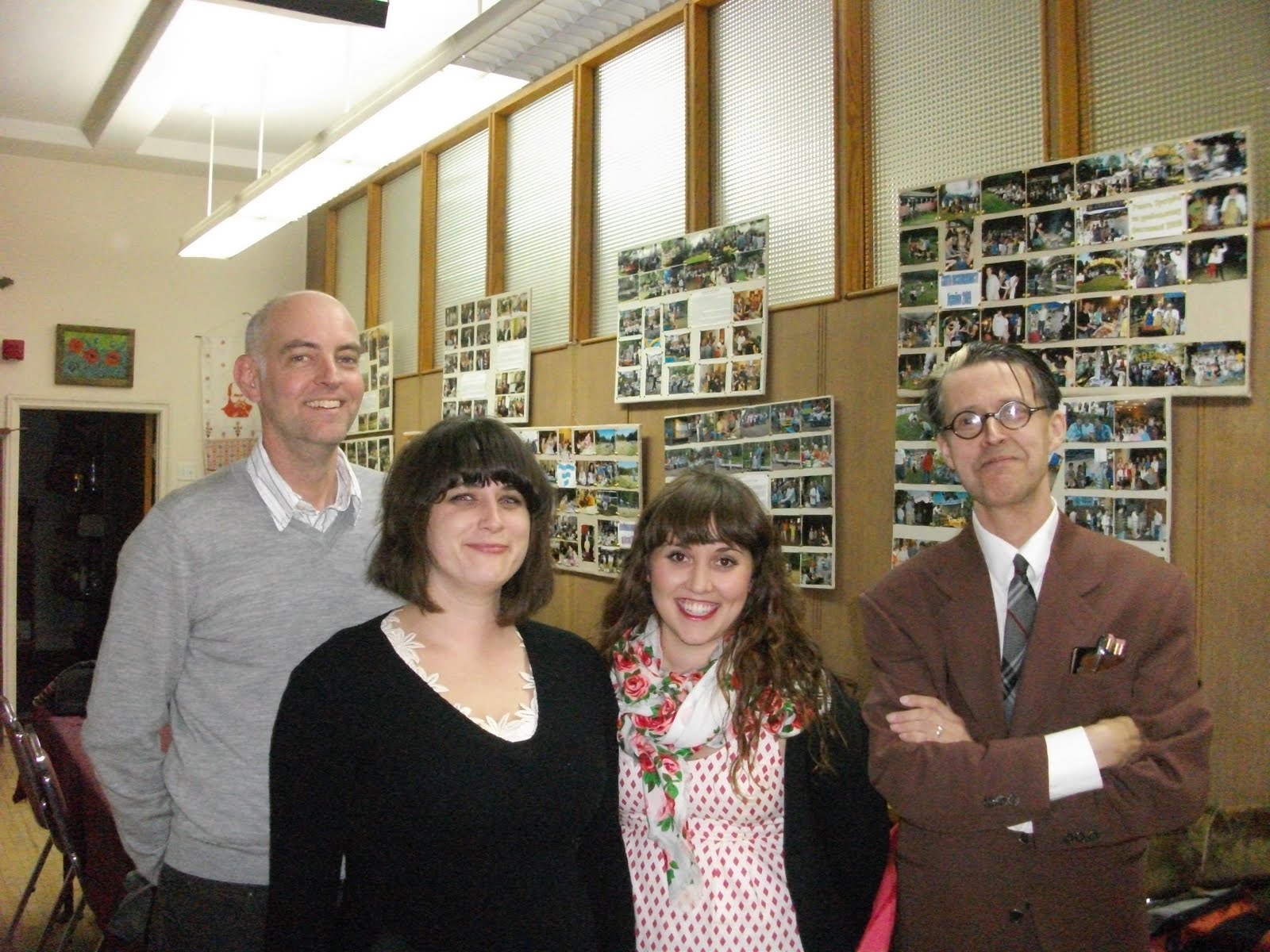 Backstage, more mugging for the camera with Jessica and Tracy. 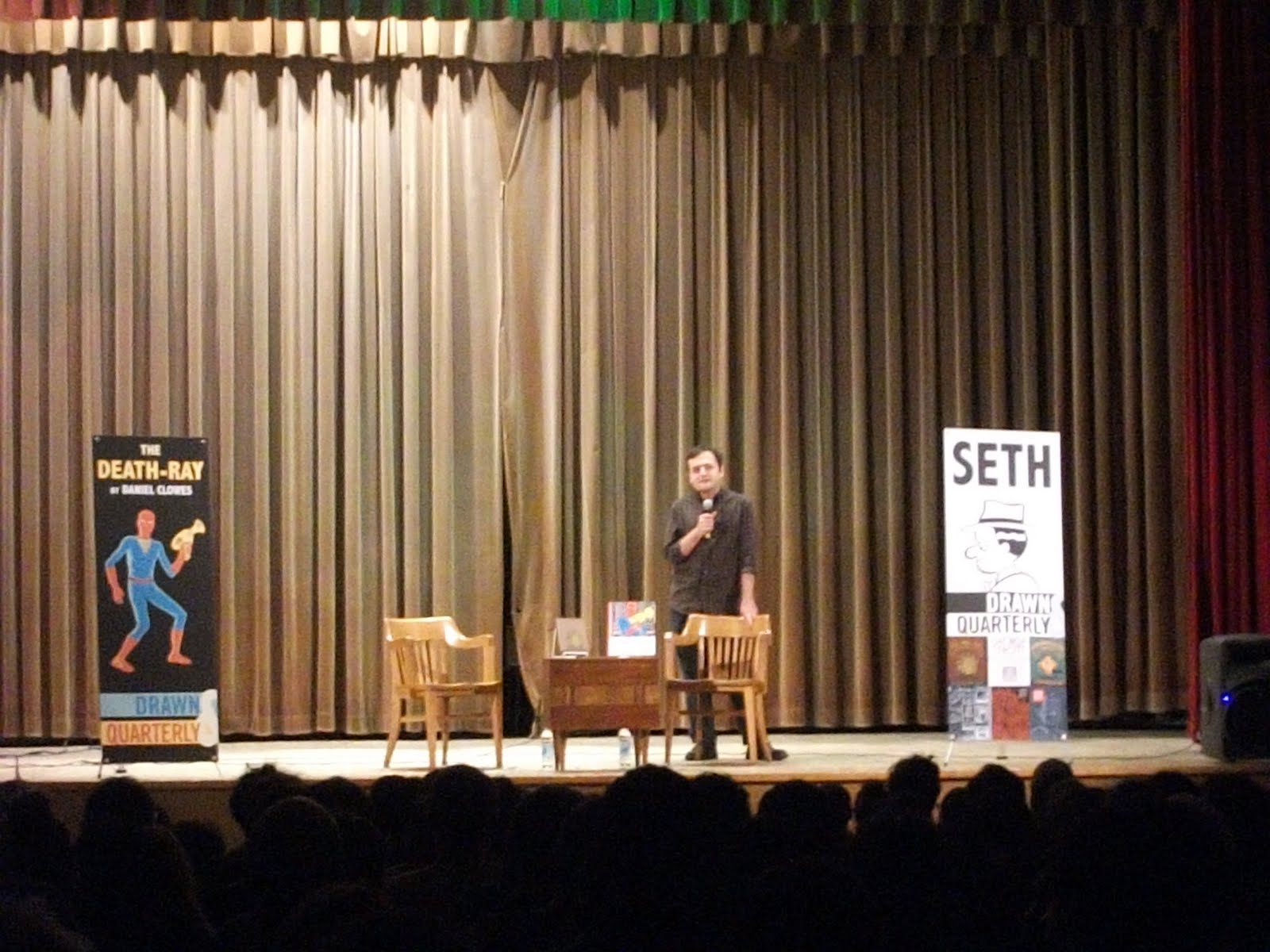 The evening officially begins with the Chief delivering a great introduction on what Dan and Seth have each brought to the medium the past 25 years. 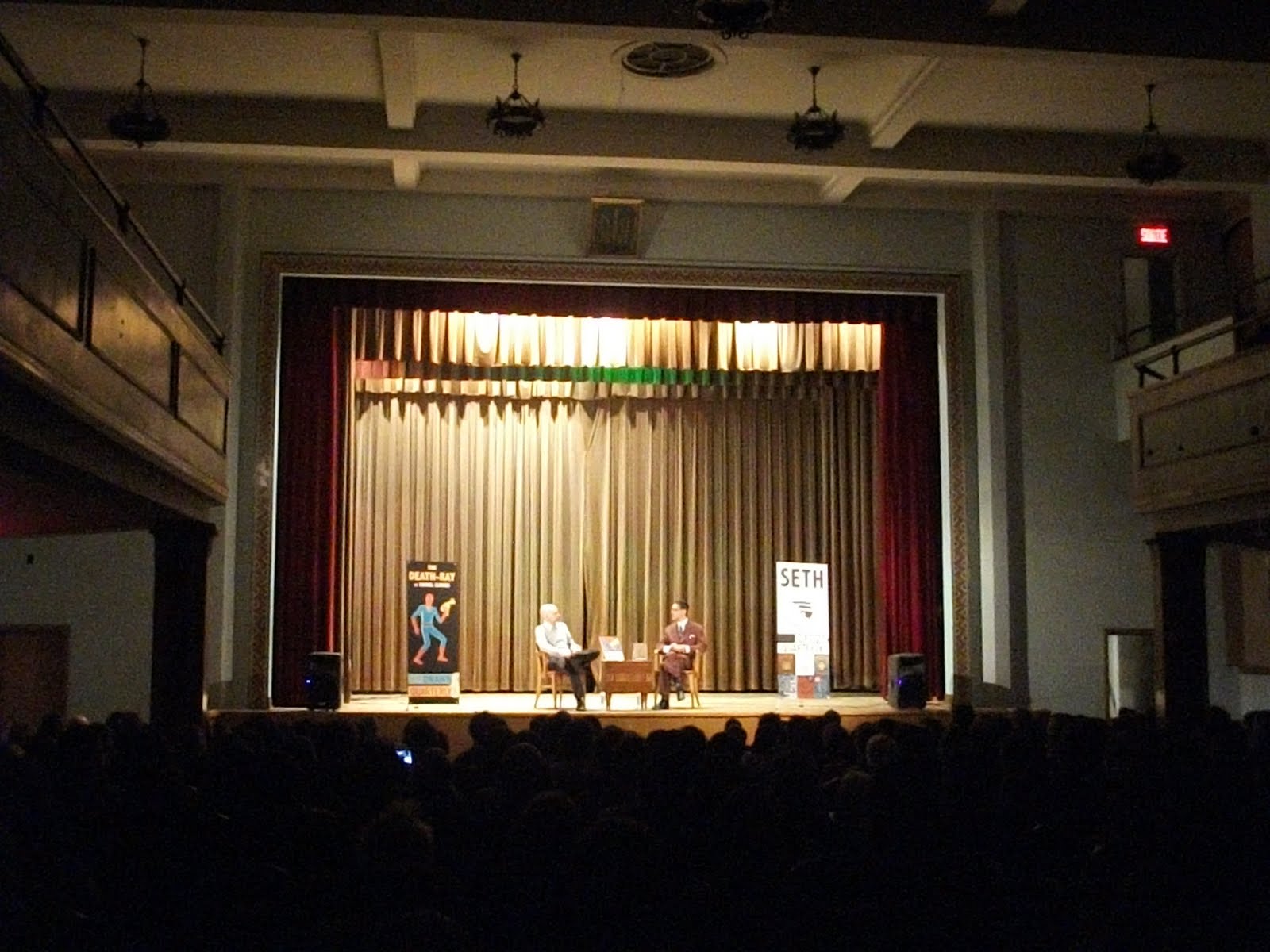 And the event begins, and as written about here, here and here, the “conversation” between Dan and Seth was fabulous. It was intimate, funny, personal and didn’t venture into the usual straight chronological territory of most moderated discussions. My favorite part was when they reminisced about how in the old days being a “pro” at a convention was a huge deal, and now today how everyone is a pro. They spoke for over an hour! 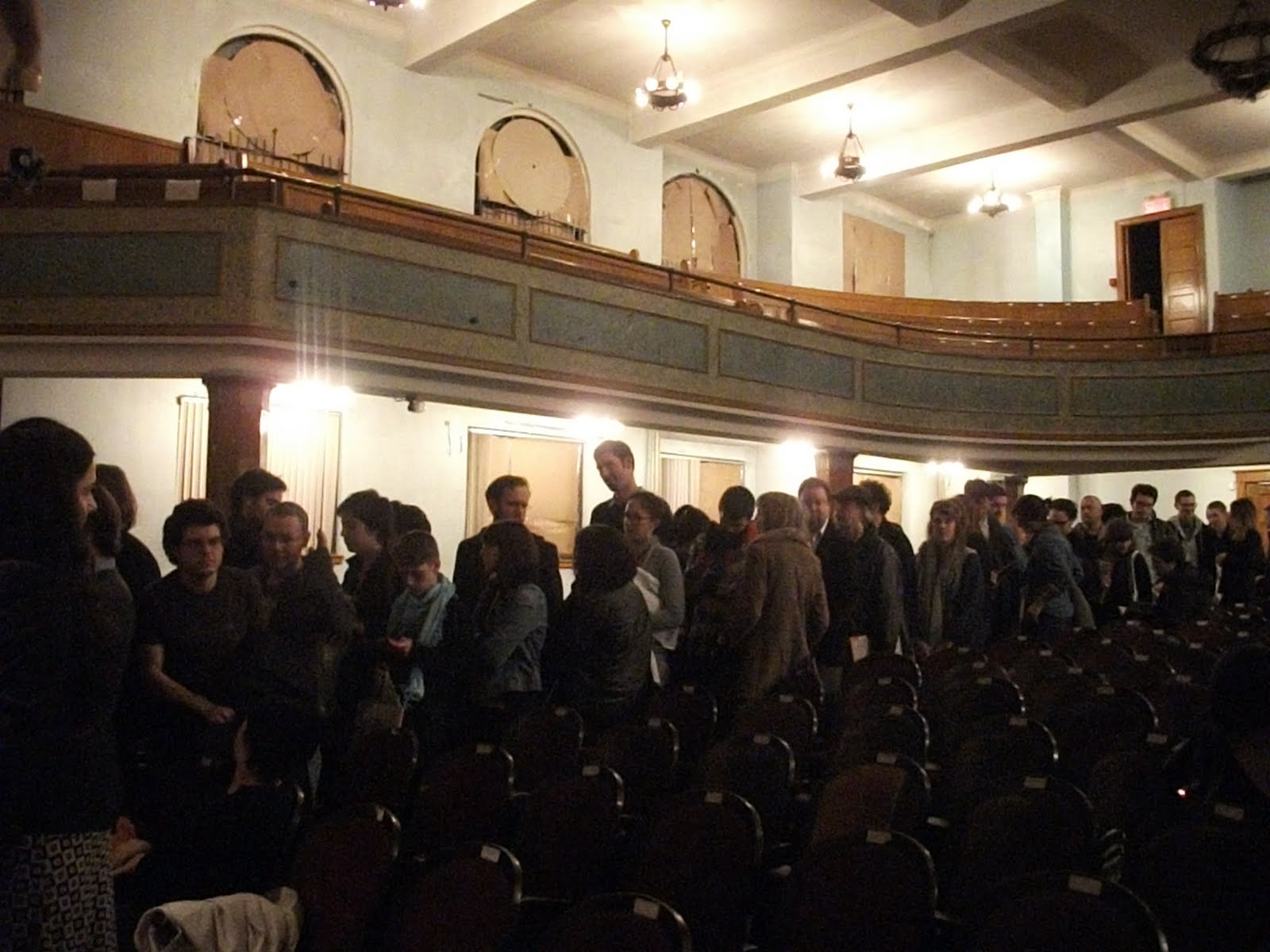 And of course then they signed for much longer than they spoke. Look at that line! Dan commented the next day that every person said they were an “art student at Concordia,” sounds about right. 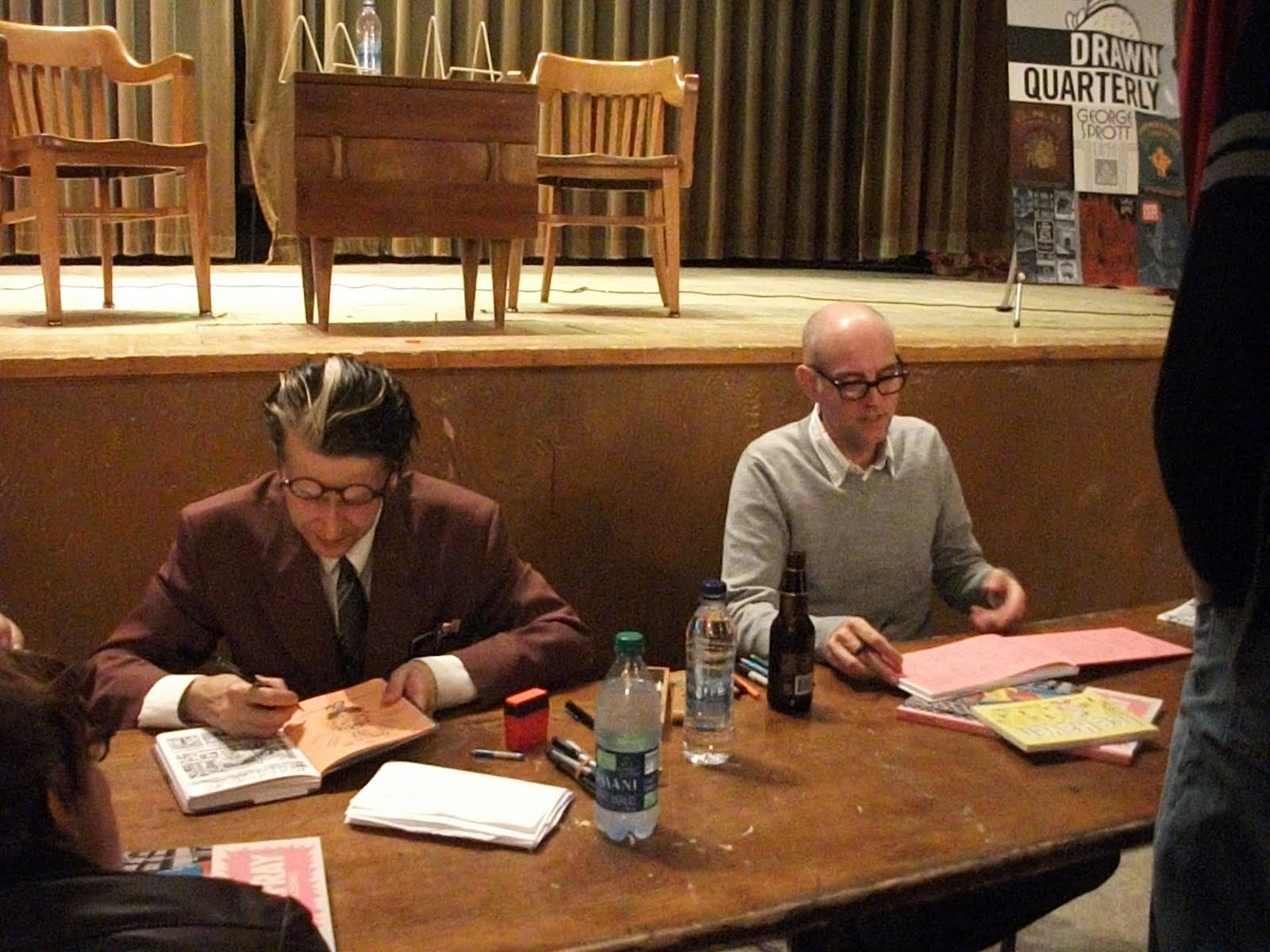 The boys were troopers. 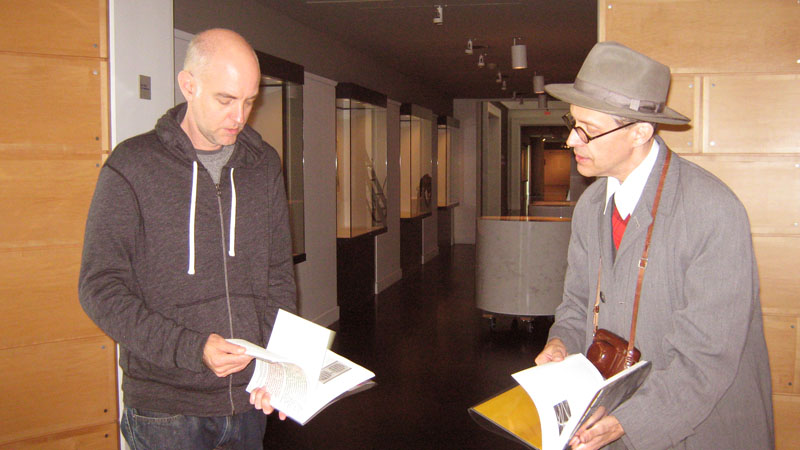 Dan and Seth didn’t fly out the next day until 4:00, so we were able to spend some QT with them. First stop was the Canadian Centre for Architecture as their “Modernism in Miniature” seemed too perfect to not bring Seth to! 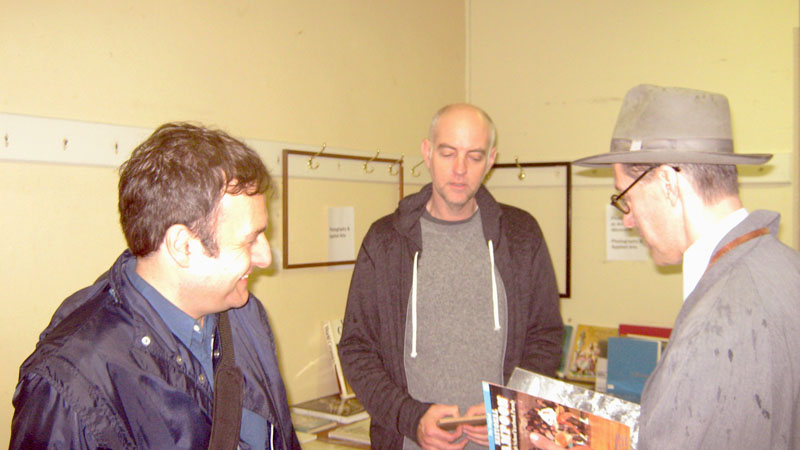 After that we headed over to the McGill campus for their annual used book fair, each of the fellas bought a book. 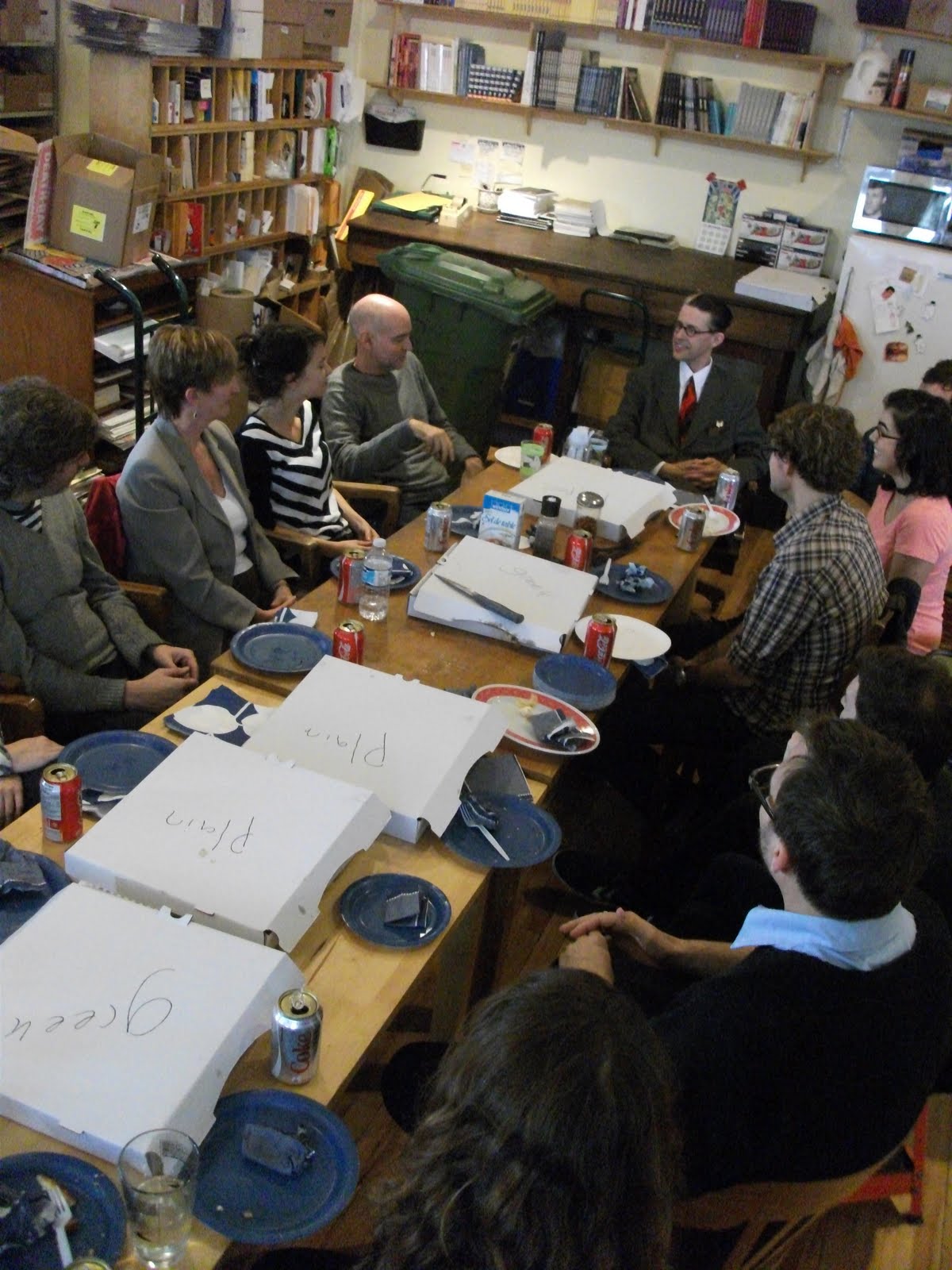 And we ended the day having a full staff lunch with Pascal Girard and Joe Ollmann! That’s a lot of pizzas! (Note to self to move the recycling bin before taking a shot, sheesh!) 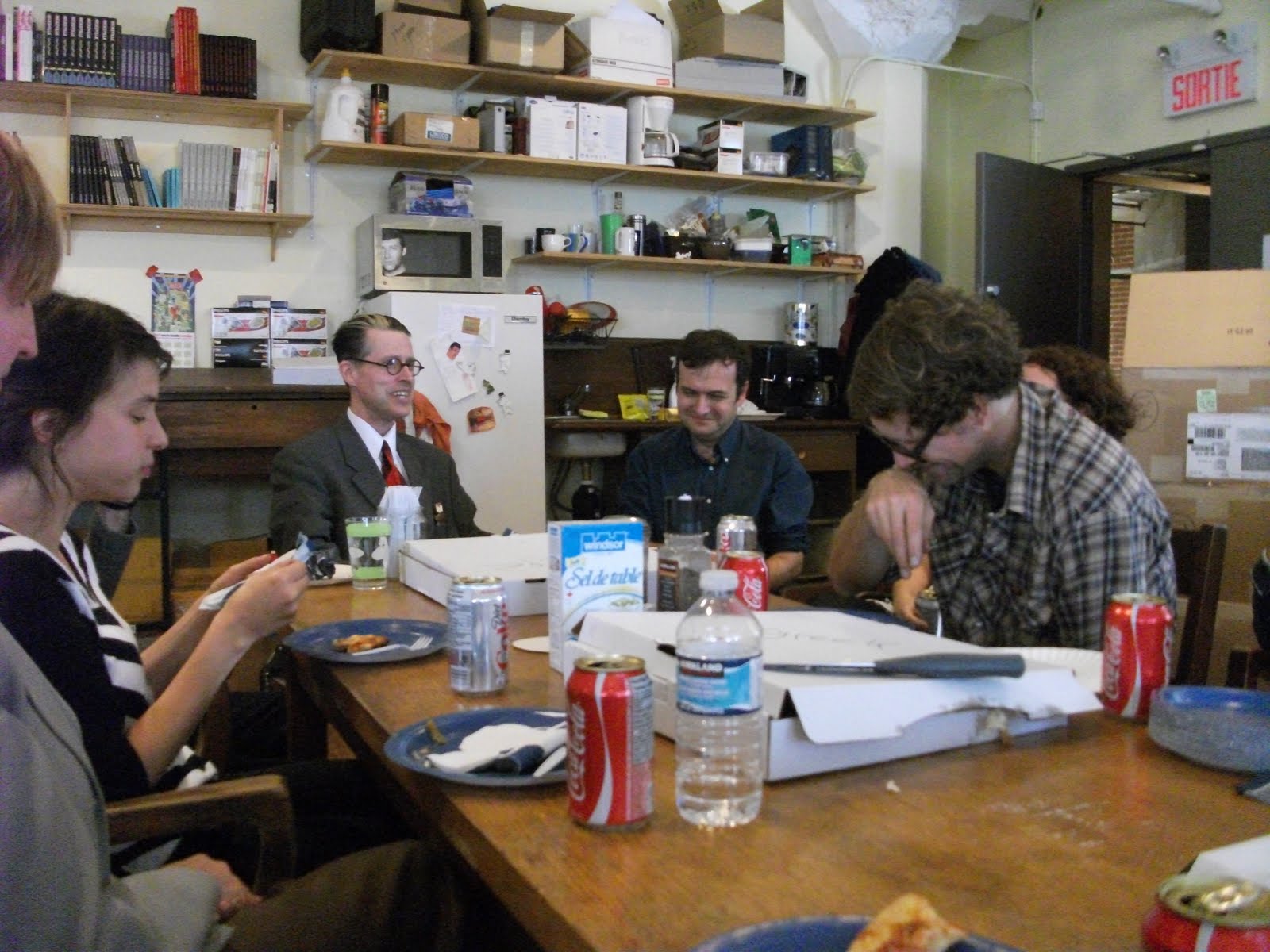 Seth tells a joke and has us all in stitches. 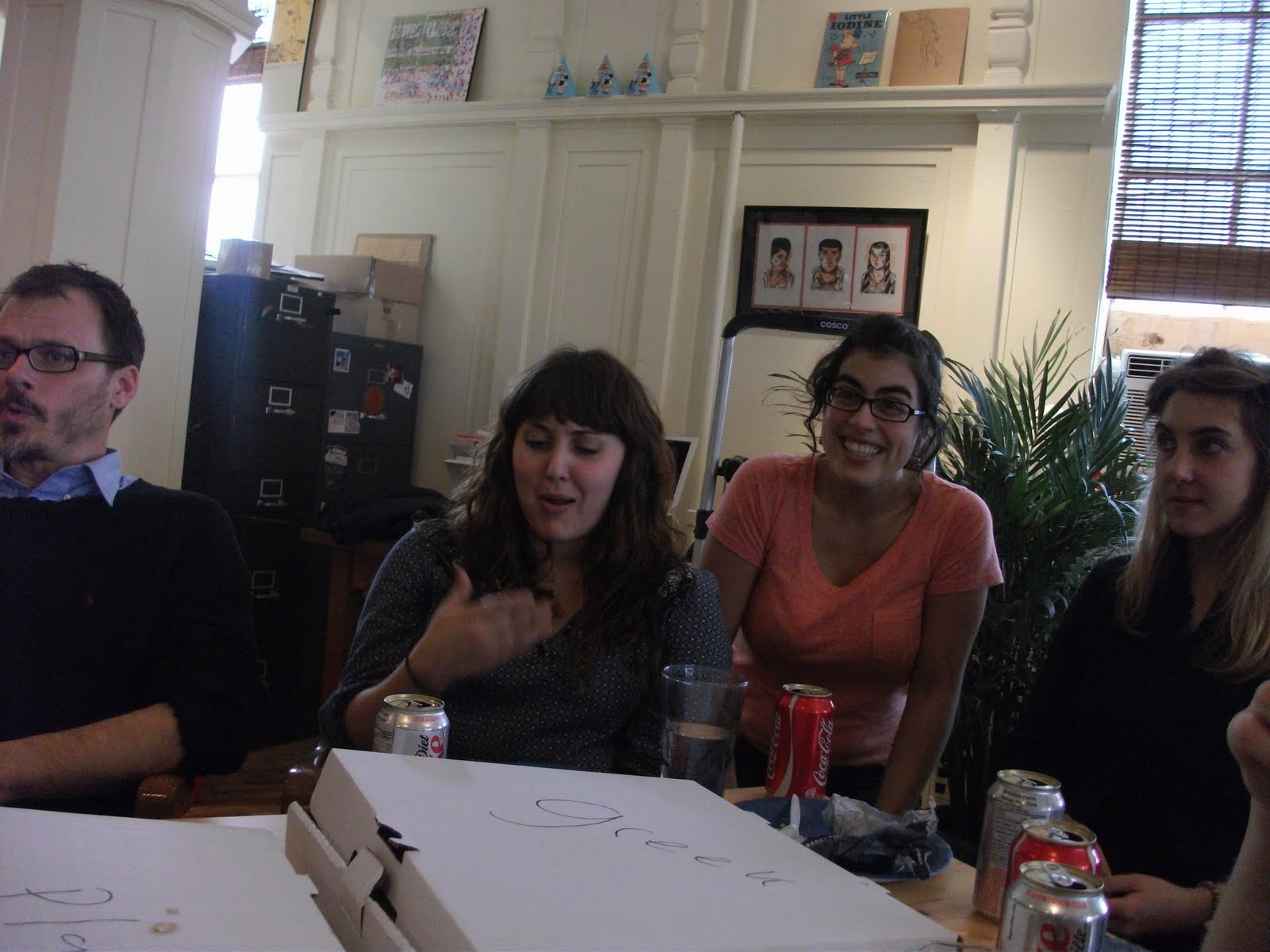 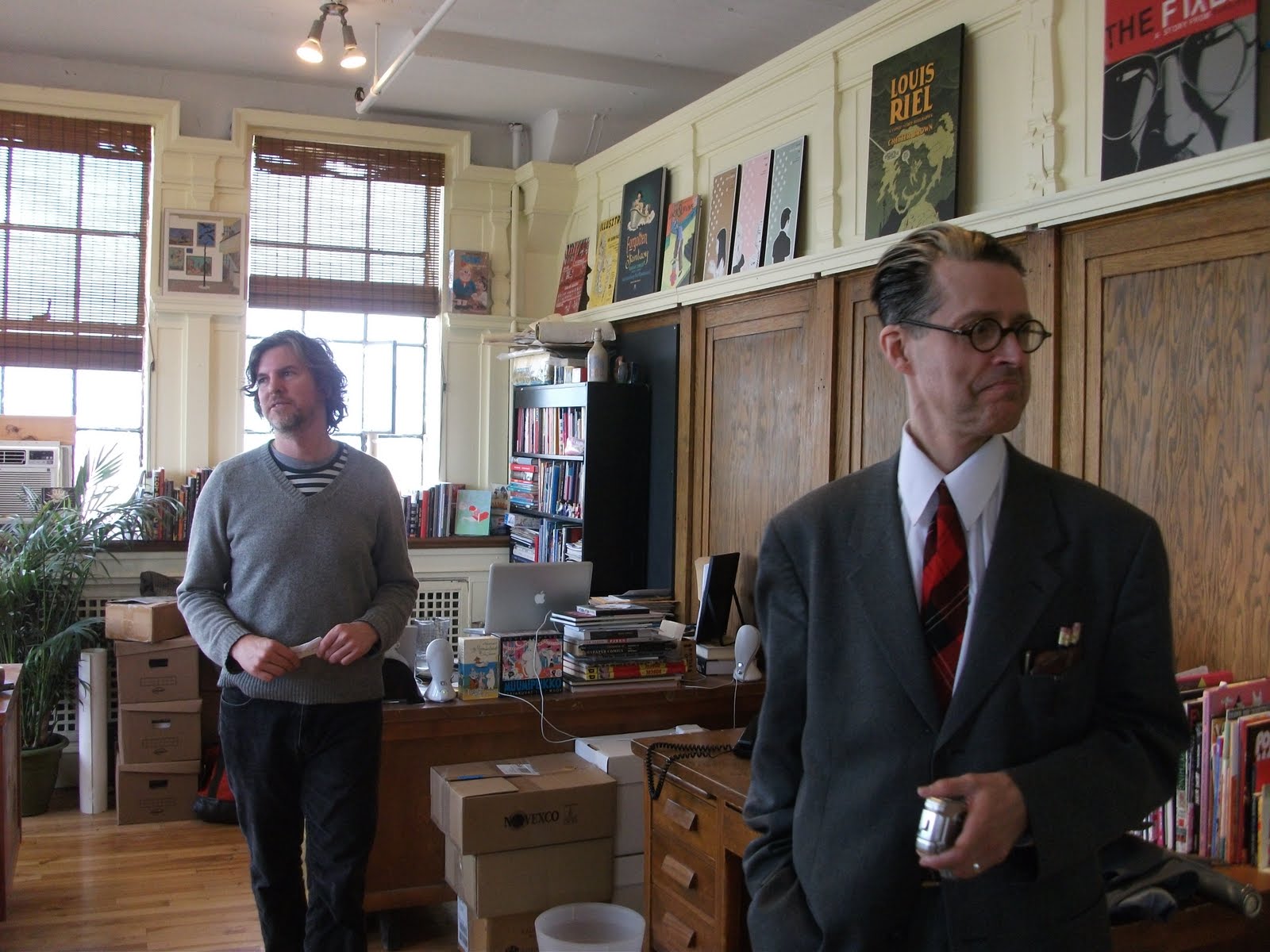 That look on Seth’s face looks like disapproval, but that is his “this passes the muster” face. 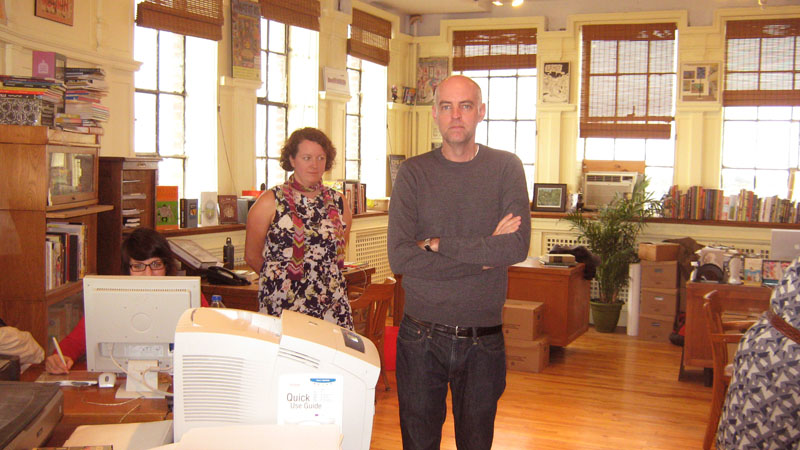 And that’s Dan’s “your office is incredible” face. 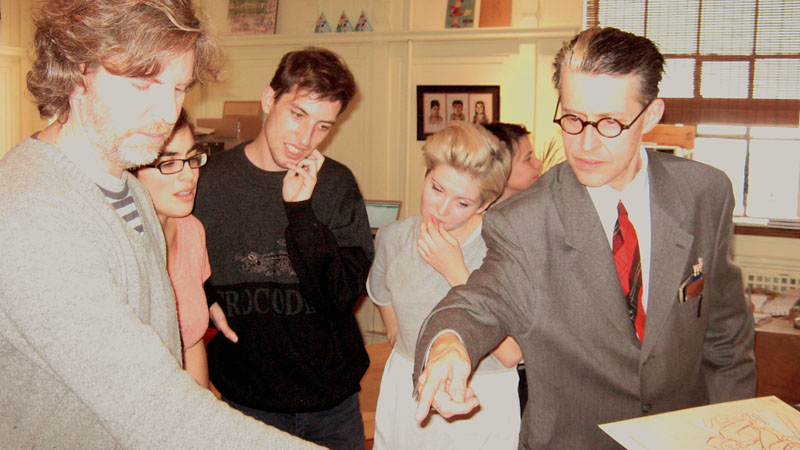 What is Seth pointing out to Tom, Julia, Julien and Fiona? 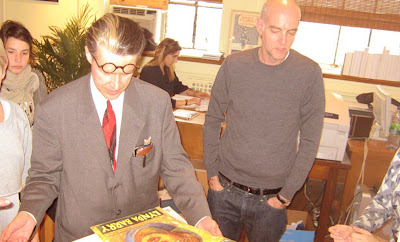 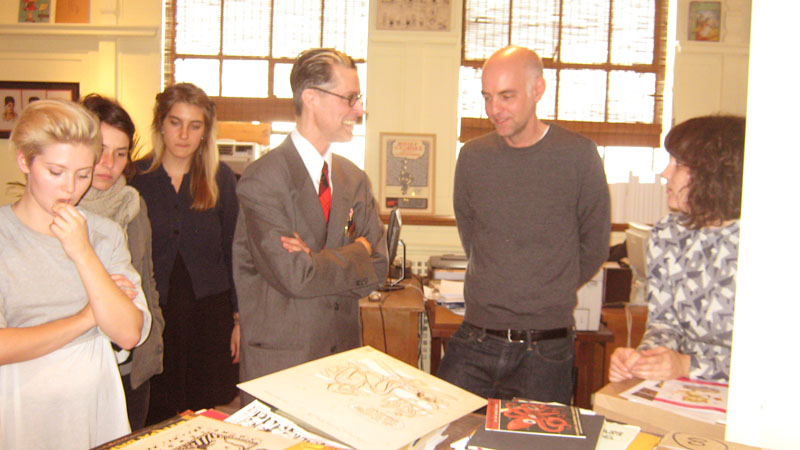 Smiles! That’s what I want to see! Smiles! After this, I took Seth and Dan to catch their flight to Toronto. Our Montreal store has been opened for exactly four years to the month, an anniversary made more special with being able to host Dan and Seth, with all of our wonderful customers in attendance. Thanks to our customers, and most of all thanks to Seth and Dan for being the consummate professionals, good friends, and for being two of the most talented cartoonists of our era. It couldn’t have gone better. Thank you.