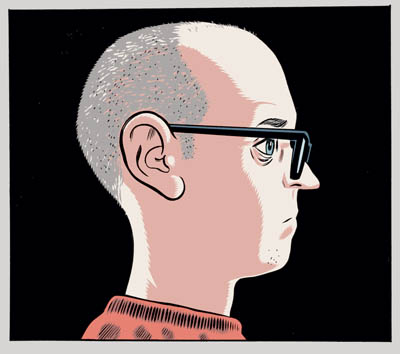 Dan Clowes and WILSON in the news! (Again!) Clowes in Oakland This Thursday! Chicago next week!

The Sunday Authors & Ideas section of the Los Angeles Times profiled Dan Clowes. Journalist Scott Timberg interviewed Dan in person while he was in town for his SRO event (200+people!) last month at Skylight and notes:

The Sunday Authors & Ideas section of the Los Angeles Times profiled Dan Clowes. Journalist Scott Timberg interviewed Dan in person while he was in town for his SRO event (200+people!) last month at Skylight and notes:

In person, Clowes — who has created an oeuvre marked by hard-edged social criticism, over-the-top satire and obnoxious, confrontational characters — is almost disappointingly well-adjusted: He’s intellectual without being weirdly intense, skeptical without being bitter, observant without being harshly judgmental.

Funny, touching, absurd and dramatic, Clowes’ tale of the life of Wilson is a triumph.

Also, Dan is in the nation’s 5th largest newspaper today, METRO, which is distributed in NYC, Philly and Boston, and if you have ever wondered why Dan has yet to pen a prose novel, read this article to find out why.

And….on stands at this very moment, is the new issue of GIANT ROBOT, #65, which features an interview with Dan. Tastemaker Eric Nakamura says:

In the humble world of indie comics, Daniel Clowes is a superhero. Just as R. Crumb made underground comix that provided reading to go with the psychedelic rock of the ’60s and ’70s, Clowes was one of the main forces that made indie comics cool in the age of grunge and indie rock…Wilson is all original and an instant classic.

No link here people, you actually have to go BUY the issue, and you should, Giant Robot, is one the great, and one of the last few remaining independent magazines.

Are you that cheap? Tsk, tsk. Well, you can read a tiny snippet of the interview with Dan with this excerpt in the June issue of a another equally great and one of the last few remaining independent magazines, The Believer, with an interview by Nicole Rudick. Or, you can go buy the issue.

And I can’t remember if I ever linked to this interview, so I’ll do it now. GQ also caught up with Clowes and Jason Chen states:

Author of game-changing titles like Eightball, Art School Confidential, and Ghostworld, Daniel Clowes not only brought humanity and sophistication to graphic novels—he gave it literary cred. Clowes’ latest, Wilson, follows a middle-aged misanthrope as he navigates life’s messy relationships, the work deftly portrays death and parenthood without sentiment or schmaltz.

All of this is just a not so subtle reminder that Clowes will be at Diesel in Oakland this Thursday, June 3rd and in Chicago next week at Quimbys and Printers Row!

And now, onto the spring list! We have a lot of great stuff coming your way, world! So get ready for…