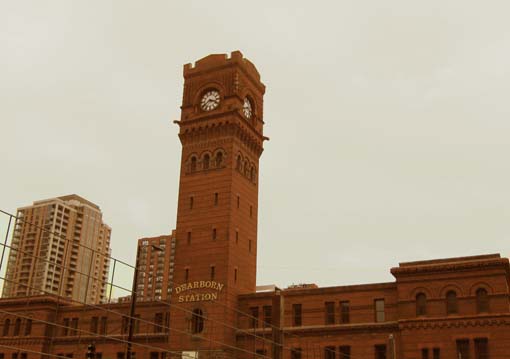 On Sunday D+Q wrapped up its second year at Chicago Printers Row, one of the best book festivals in North America. Our booth was just below the old Dearborn Station.

On Sunday D+Q wrapped up its second year at Chicago Printers Row, one of the best book festivals in North America. Our booth was just below the old Dearborn Station.

The great Lynda Barry and Chris Ware packed the main stage with a wildly entertaining panel discussion on the nature of drawing and creativity and then hordes of audience members followed them to our booth for this signing on Saturday.

Chris Ware participates in only about one or two signings each year, so this was a rare chance to meet him.

It had just finished raining minutes before (there were still occasional raindrops during the signing and everyone had to be careful not to place books on certain parts of the table).

Luckily this scene only lasted a few minutes, as somehow the real downpours held off for most of the weekend.

Got a chance to finally meet Ray Pride, a long-time D+Q supporter at New City, where he’s worked as a writer and editor for many years. He talked about the early years at the paper working with Jorge Colombo and Chris Ware, and how Chris would spend many late nights cutting Rubylith for his weekly strip (before the days of computer coloring).

Lynda sure is a real trooper. Here she is with Rebecca on Sunday, signing at the booth even though What It Is had sold out the prior day after hordes of new readers depleted our supply. She brought little note papers so that people could still get drawings from her. The other tables in the background belonged to the Vegetarian Resource Group, making this tent a one-stop shopping destination for cookbooks and comics.