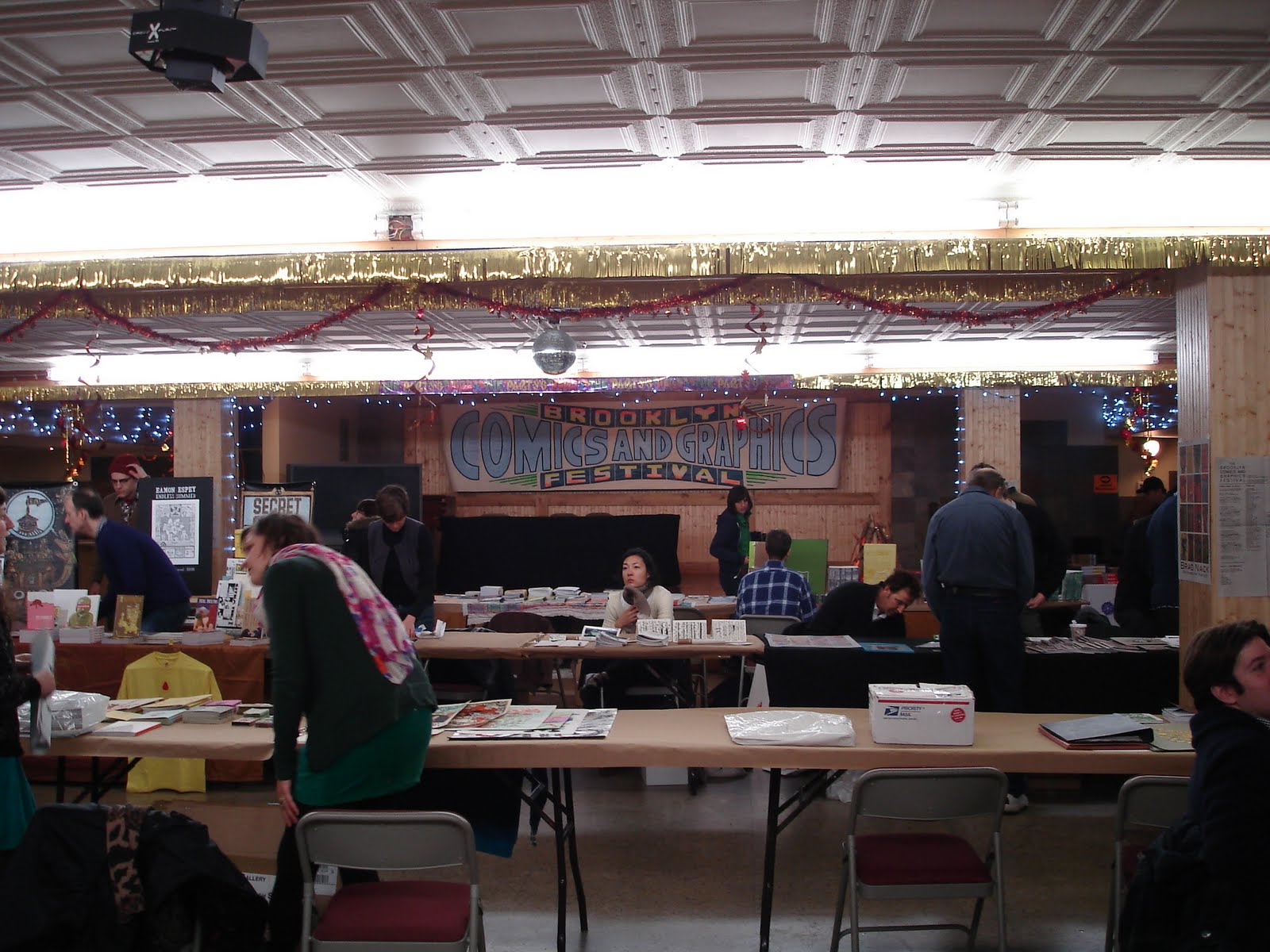 This past weekend was the inaugural Brooklyn Comics and Graphics Festival in Williamsburg, hosted by Gabe Fowler of Desert Island and Dan Nadel of Picturebox.

This past weekend was the inaugural Brooklyn Comics and Graphics Festival in Williamsburg, hosted by Gabe Fowler of Desert Island and Dan Nadel of Picturebox.

This photo gives you an idea of the space, which was a church basement. The feel of the show was really comfortable and nice, very similar to Montreal’s ExpoZine, but with a big representation of the cartoonists, publishers, print makers, etc who regularly come out for the other small press shows. One really nice thing about the show was that, mixed in with the cartoonists and familiar faces were a lot of people who had heard about the show or had just wandered in, but seemed relatively unfamiliar with comics. Our booth was totally swamped the whole time, which makes sense as 6 of our cartoonists (Gabrielle Bell, R.O. Blechman, Charles Burns, Ron Rege, R. Sikoryak and Adrian Tomine) were there doing programming and/or signing.

I was alone at the booth, so I wandered around beforehand snapping shots of everyone setting up. Gabe Fowler puts together one of the Desert Island tables. He seemed remarkably calm the whole time, which is pretty impressive considering how successful the show was.

Jon Vermilyea’s table, which was, as usual, totally overwhelming and exciting to look at. Unfortunately, toymaker (and Jon’s gf) Shannon O’Neill’s sewing machine broke the day before the show and she thusly didn’t really have anything there. Also, sorry to whoever’s butt that is.

Dernier Cri! BE CAREFUL WHEN YOU TRY TO BRING THESE THINGS ACROSS THE BORDER.

Why, hello there, Randy Chang and Tony Shenton. I am stalking you.

Charles Burns and Adrian Tomine sign at the booth, which was a real treat. Adrian very graciously agreed to take some time away from his 5 week-old baby daughter, Nora, to sign books and Charles is always a delight to have around.

R. Sikoryak and Gabrielle Bell madly sign books before doing some live drawing. Side-note: I couldn’t go to see the programming, but I hear that the programming hall was packed the whole time and that all of the events went really well. Everyone who participated or went to one seemed decidedly pleased.

It was Ron Rege’s BIRTHDAY, but he was still happy to sign books, meet fans and participate in a panel, which he said was his first ever!

AND finally, I snapped some pics of this rough looking crew hanging out around our table around the end of the day. Melissa and Chuck, former D+Q interns and CCS students/graduates both, and Leon and Barry from Secret Acres. What’s wrong, guys???