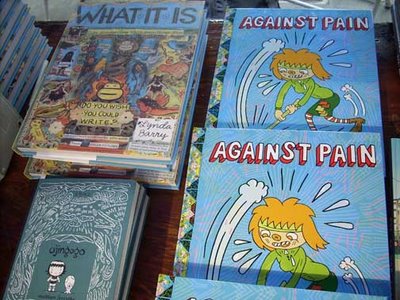 …while over at the other table people peruse the new books.

I realize this looks like Miriam Katin is signing a stack of Adrian’s books (see Crickets #2 for more insight), but it’s just the angle of the camera.

This is my favorite: a mother told her two kids they can give the Moomin books a “test read” to see if they liked it. After standing in this position for about 10 minutes, reading through each volume, they were hooked and their mother bought all 3 in the series. Later in the day, a young girl squealed with delight (sorry, no photo) when she saw the stacks of Moomins. Apparently just the day before she was given volume 1 as a present for her 7th birthday, so of course her mother had to buy the two follow-up volumes…

Gabrielle Bell signs all things Lucky (the book collection, and volume 2, #’s 1 and 2), which happens to be blocked (from this angle) by a stack of Shortcomings.

Former interns extraordinaire Claudia and Sean reunite at the D+Q booth. Claudia went from being an intern on the publishing end to working at D+Q’s Montreal storefront for nearly a year. She just moved to New York last week to begin a new internship at the new Museum of Arts and Design in Columbus Circle. Sean also now lives in New York, where he was recently hired to work on production for esteemed publisher (and D+Q distributor) Farrar, Straus & Giroux.

On Monday morning I caught the train to visit the beautiful upstate New York studio of legendary illustrator/artist/filmmaker/cartoonist R.O. Blechman. His career began in 1952 and in the 56 years since then his artwork and comics have appeared everywhere, from the New Yorker and Esquire, to the Village Voice and the Huffington Post. Some of his earliest comics even appeared in Kurtzman-edited Humbug.

D+Q is planning the first retrospective of Blechman’s graphic stories for next year, beginning with some of his earlier strips from the 50s and 60s and going right up to his most recent comics from the New York Times Book Review. This photo (above) shows the sequence of stories for the book that we stacked alongside the edge of his studio window.

Aside from a regular feature in the magazine, Blechman also did one of the covers for Humbug (second from left). Further to the right are two early 1960s-era books of Blechman’s comics.