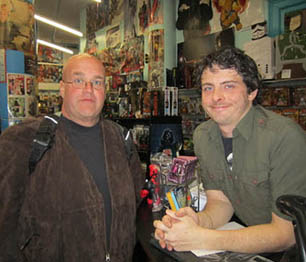 And with that, goodbye 2011! Brooklyn Comics & Graphics Closes the Year!

I arrived to NYC early as The Comics Reporter himself was already there. We made early Friday morning plans for breakfast and then spent the day in bookstores. Here we are visiting Jeff Ayers of Forbidden Planet.

I arrived to NYC early as The Comics Reporter himself was already there. We made early Friday morning plans for breakfast and then spent the day in bookstores. Here we are visiting Jeff Ayers of Forbidden Planet. 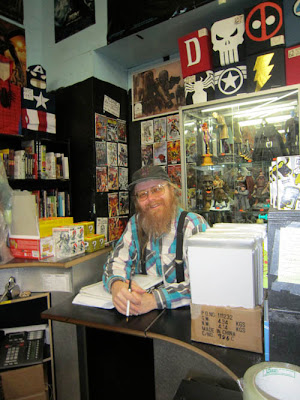 Who else is at Forbidden Planet? Just good ol’ Tony Shenton. 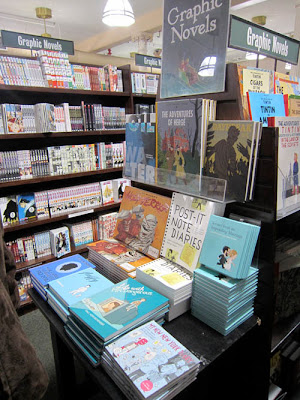 From there we move over to the fourth floor of the flagship Barnes & Noble Union Square store. Check out that endcap, except for the, ahem, one wing nut book on it, whatta shelf! Who could be responsible? 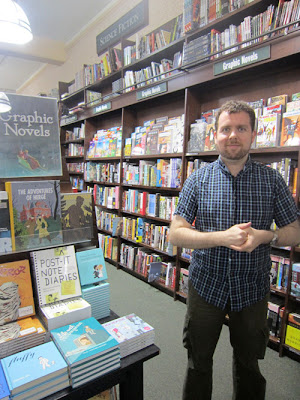 Oh just the man behind the scenes Connor who you can find Friday nights at the UCB Theater. Like all good comedians, Connor has impeccable taste in comics. 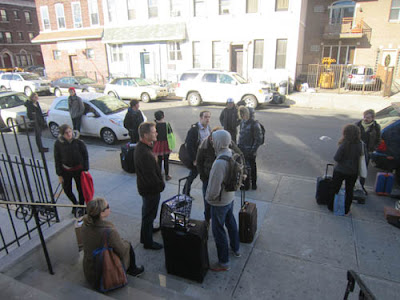 Early morning in front of the church, waiting for it to open. 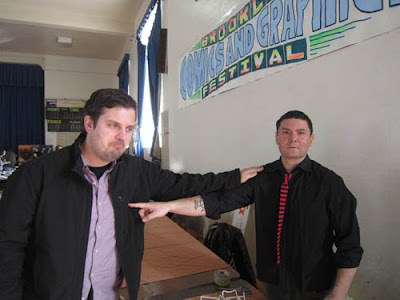 Yes, my neighbors are Secret Acres. Above is my former DC Comics and Drawn & Quarterly intern and fine cartoonist Sean Ford and my former coworker Leon Avelino. 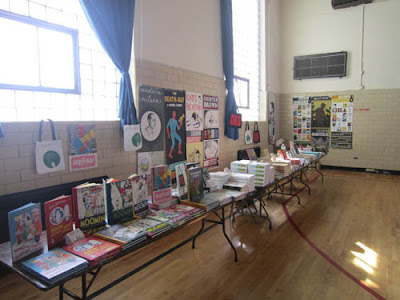 You know how we are here, we always like to get a good booth shot in. 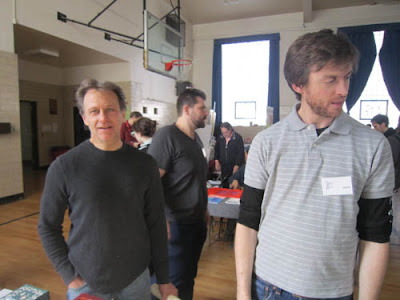 Gary Groth and Sam Arthur came by early in the day to say hi. 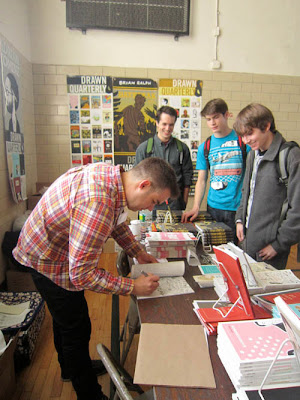 Brian Ralph kicked off the day signing his NY Times Bestselling Graphic Novel Daybreak. We could have sold 100 copies of that book to SCAD grads alone! 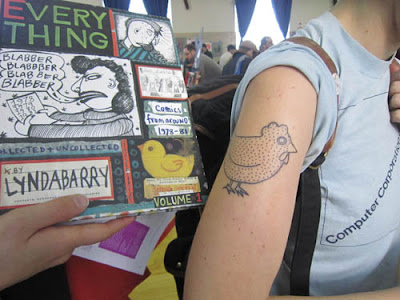 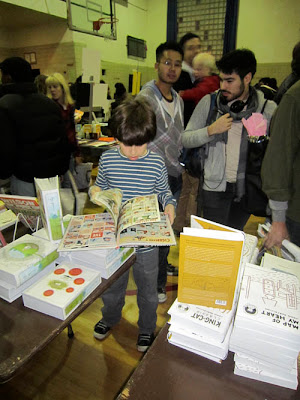 This happened a few times during the day. A young boy perhaps 10 or 11 years old is drawn to The Death-Ray. I mean, I know kids in NYC mature faster, but as a Mother, I think I’ll pull out the Clowes a bit later on. 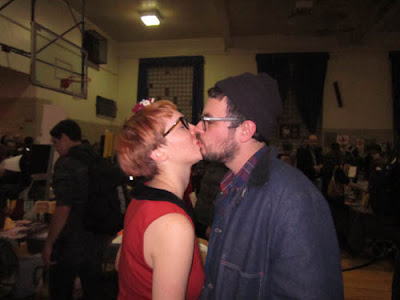 Yup, these cuties Lizz Hickey and Keith Jones are as adorable as ever! 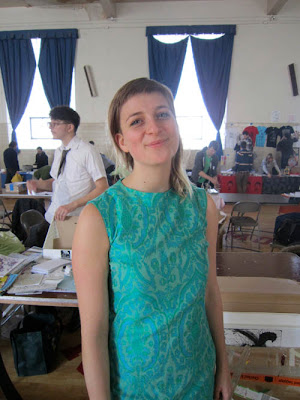 This is Juliacks, who I met while in Finland in September. She’s the sweetest! 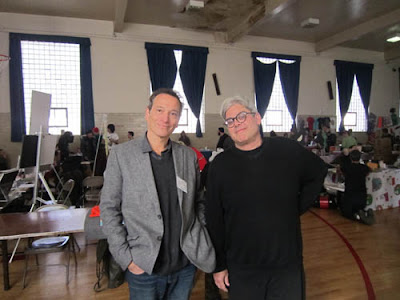 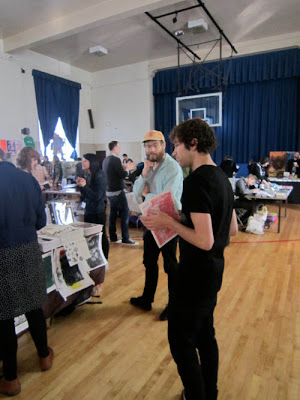 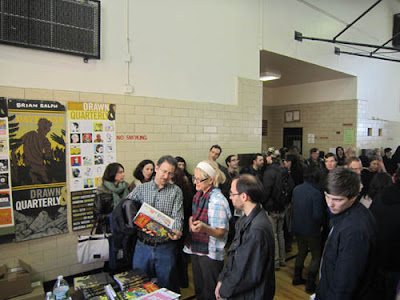 Adrian’s line starts to form even before he gets there, wrapping around the corner. 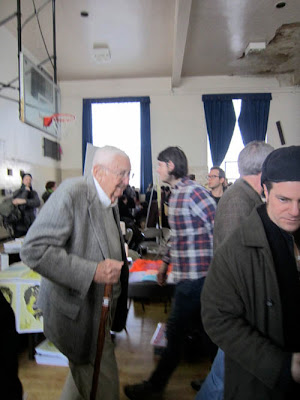 The man of the hour, the weekend! Jack Davis! Total celebrity sighting! His new book from Fantagraphics looks great! 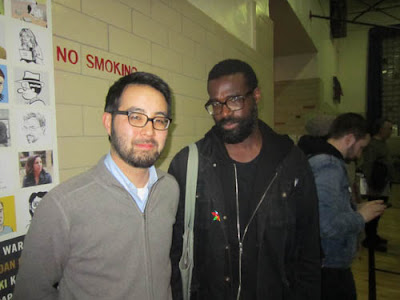 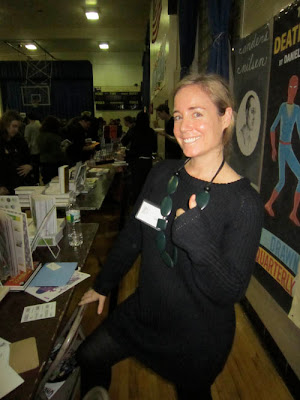 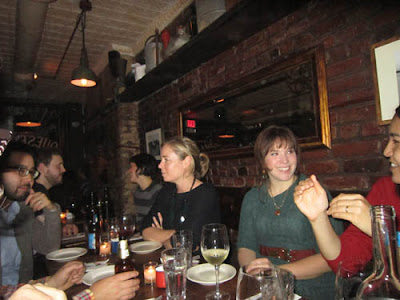 And the good old end of night dinner. You know when you are with Adrian, you are going to eat a good meal. Thanks everyone for a great show! (I blame the lack of jokes in this entry on the fact that the show lasts until 9 PM. I’m old I can’t remember)