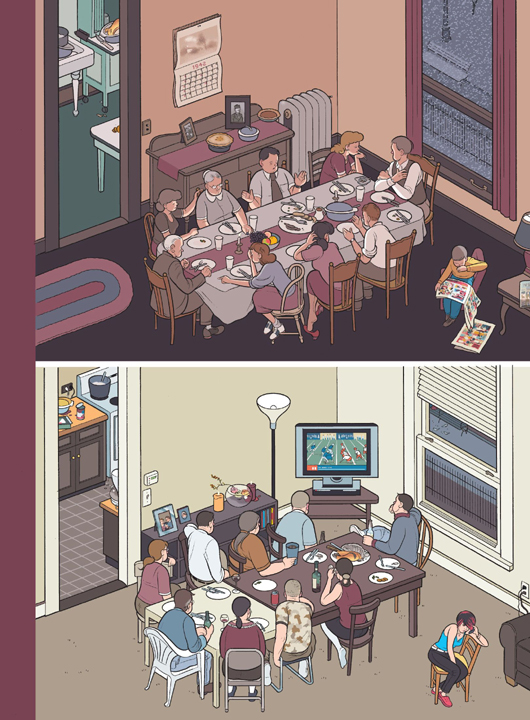 Adam Baumgold Gallery presents a recent series of original comic drawings by Chris Ware Drawings For New York Periodicals, from February 1 through March 15, 2008. The 40 drawings in the exhibition include the complete 30 weekly drawings comprising one chapter of the in-progress book “Building Stories” which inaugurated the “Funny Pages” in The New York Times Sunday magazine in 2005. In addition, the exhibition will feature the four different Thanksgiving cover drawings that were published simultaneously by The New Yorker in 2006 as well as the fifth cover that was released only online by The New Yorker. Other drawings by Chris Ware done specifically for the New Yorker will also appear in the exhibition. The 30 “Building Stories” drawings focus on one day, one hour each, in the lives of the inhabitants of the three floors of a Chicago apartment building. Their thoughts, ambitions, day dreams, second guesses, and real-life interactions are scrutinized and in some cases amplified into seemingly monumental events. The drawings for The New Yorker Thanksgiving issue combine scenes from the present and the past that comment on holidays, sustenance and war. Chris Ware was born in Omaha, Nebraska in 1967. He is a graduate of the University of Texas at Austin and also attended The School of the Art Institute of Chicago. He is the author of "Jimmy Corrigan – the Smartest Kid on Earth" (Pantheon Books, 2000) which received the Guardian First Book Award in 2001 and the American Book Award in 2000. His is also the author of the irregular periodical “The Acme Novelty Library” (Volume #1 - #18) Chris Ware’s books “Quimby the Mouse” and "The ACME Novelty Datebook" (Volume 1), were released in 2003 and in 2004. He was the recipient of the Eisner and Harvey Comic book awards, in 1994 and 2004, the "L'Alph Art" award in 2003, and a United States Artists "Hoi" Fellowship in 2007. Chris Ware’s “The ACME Novelty Library #18” (“Building Stories”) and "The ACME Novelty Datebook" (Volume Two) as well as the portfolio of prints related to The New Yorker Thanksgiving covers (“The ACME Novelty Library #18.5”) all were released in late 2007. Chris Ware’s work was included in the Whitney Biennial in 2002, as well as in the traveling exhibition MASTERS of American Comics in 2005-6 that opened at MOCA and the Hammer Museum in Los Angeles. Chris Ware had a retrospective exhibition at The Museum of Contemporary Art in Chicago in 2006, and in 2007 at the Sheldon Memorial Gallery in Lincoln, Nebraska. Chris Ware lives and works in Oak Park, Illinois. The gallery hours are Tuesday through Saturday 11:00 to 5:30 P.M.