When a great antiquities collector is forced to donate his entire collection to the Hebrew University in Jerusalem, Nili Broshi sees her last chance to finish an archaeological expedition begun decades earlier—a dig that could possibly yield the most important religious artifact in the Middle East. Motivated by the desire to reinstate her father’s legacy as a great archaeologist after he was marginalized by his rival, Nili enlists a ragtag crew—a religious nationalist and his band of hilltop youths, her traitorous brother, and her childhood Palestinian friend, now an archaeological smuggler. As Nili’s father slips deeper into dementia, warring factions close in on and fight over the Ark of the Covenant!

Backed by extensive research into this real-world treasure hunt, Rutu Modan sets her affecting novel at the center of a political crisis. She posits that the history of biblical Israel lies in one of the most disputed regions in the world, occupied by Israel and contested by Palestine. Often in direct competition, Palestinians and Israelis dig alongside one another, hoping to find the sacred artifact believed to be a conduit to God. Two time Eisner Award winner Rutu Modan’s third graphic novel, Tunnels, is her deepest and wildest yet. Potent and funny, Modan reveals the Middle East as no westerner could. 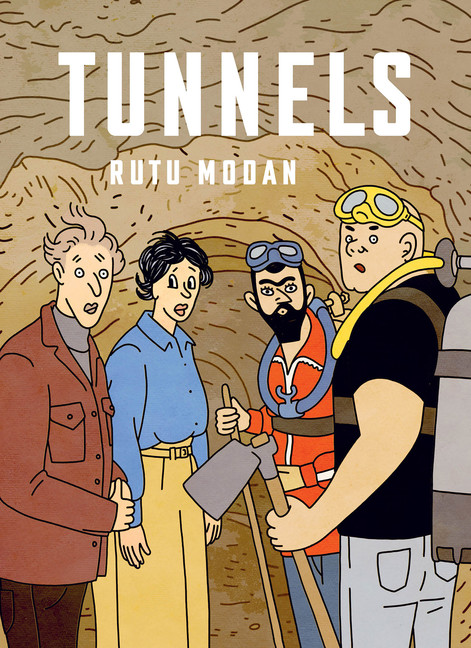 $29.95
48529
PRAISESPECSEVENTSPRESSAWARDS
"[Tunnels] is a sprawling, madcap fiction about archaeology, antiquities and profound issues of boundaries and ethics."—New York Times Best Graphic Novels of 2021

"Complex and thrilling… If Modan has given us a tightly plotted adventure story, she has also delivered a brilliantly daring satire. Her gaze spares no one: even Nili (especially Nili) is a pain in the backside."—Rachel Cooke, The Guardian

"Biting, bracing, and bold in both its satire and ambition, “Tunnels” is a book that works on multiple levels, and is successful on every single one."—Variety Best Comics of 2021

"Modan has a gift for combining drama and deft characterization to get to the human heart of issues facing contemporary Israel."—Forbes Best Graphic Novels of 2021

"Modan is a genius and I hope lots of people will read this story..."—Rachel Cooke, The Guardian Best Graphic Novels of 2021

"When so many people—Israelis and Palestinians—want a piece of the land, things are bound to end with an explosion. Yet despite underlining petty and self-interested motives on all sides, [the book] portrays its characters in a sympathetic light: Can readers really quarrel with a woman’s quest to reclaim her father’s heritage, or over a Palestinian’s negative attitude toward Israelis after witnessing the treatment of his people by the IDF ...Tunnels is a great triumph.”
—Tablet

"An adventure story that dives deep into the world of Israeli archaeology, gets its hands dirty digging for lost treasures, plunges into the intrigues and rivalries of academia, and collides head-on with the Israeli-Palestinian conflict.”
—Haaretz

"Rutu Modan has written and drawn a true adventure story for the modern age, where a classic quest for precious antiquities is complicated by human relationships and real-world politics. Vivid characters vie for control, events take unexpectedly hilarious turns, farce folds in on itself, and a cow jumps over the moon. The most fun I've had reading a graphic novel in years.”
—Jason Lutes, Cartoonist of Berlin

"Through exuberant wit, wisdom and genuinely cinematic verve, Modan’s Middle-Eastern intrigue grabs us from the very first panel and never lets go. A colorful cast of passionate, exasperating and eccentric characters, all flawed yet somehow loveable, enliven Tunnels’ riotous plot. With constantly surprising twists and turns, Modan packs a great deal into this slyly subversive, highly entertaining story—a rancorous family, the mis/uses of archaeology and the mythical past, messianic zealots, human greed, and the tempest of current Israeli-Palestinian relations—and yet it all brilliantly succeeds, with dollops of rich human comedy leavening her very serious themes. The most deliriously inventive and daring graphic novel in recent memory, Tunnels triumphs as the perfect adventure story for thinking adults.”
—Ranen Omer-Sherman, Professor of English and JHFE Endowed Chair in Judaic Studies at the University of Louisville

"Tunnels is an incisive dig into contemporary Israeli life. It's rich with human foibles, critical of how both religion and archeological claims shape life along the separation wall, and also an adventure story. Rutu Modan is a gifted storyteller, full of life and humour."—Nicole Krauss, author of To Be a Man

Affecting… brightly colored and perfectly paced, [Modan’s three graphic novels] have established her as her country’s most renowned comics artist.

In this graphic novel by preeminent Israeli cartoonist Modan, when the irrepressible Nili Broshi discovers a map to the ...

ALA Sophie Brody Medal for Achievement in Jewish Literature

Nominated for for Tunnels