The penultimate issue of Louis Riel! The last issue saw the brave Metis and their leader locked in a losing battle with the superior numbers of the Royal Canadian Army. Louis and his right-hand man Gabriel Dumont flee the scene to regroup with the surviving rebels and plot their next move against the government.

But Fortune has abandoned the Metis cause and soon Louis is in chains–brought to trial for treason. Louis is a passionate and inspired leader but his erratic behaviour makes everyone, even his own people, believe he is vainglorious and mad. Louis is not just on trial for his life–treason is punishable by death–but he must defend himself against the verdict of history. 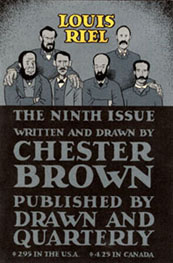