Before there was Kate Beaton, New York Times bestselling cartoonist of Hark! A Vagrant, there was Katie Beaton of the Cape Breton Beatons, specifically Mabou, a tight-knit seaside community where the lobster is as abundant as beaches, fiddles, and Gaelic folk songs. With the singular goal of paying off her student loans, Katie heads out west to take advantage of Alberta’s oil rush—part of the long tradition of East Coasters who seek gainful employment elsewhere when they can’t find it in the homeland they love so much. Katie encounters the harsh reality of life in the oil sands, where trauma is an everyday occurrence yet is never discussed.

Beaton’s natural cartooning prowess is on full display as she draws colossal machinery and mammoth vehicles set against a sublime Albertan backdrop of wildlife, northern lights, and boreal forest. Her first full length graphic narrative, Ducks: Two Years in the Oil Sands is an untold story of Canada: a country that prides itself on its egalitarian ethos and natural beauty while simultaneously exploiting both the riches of its land and the humanity of its people. 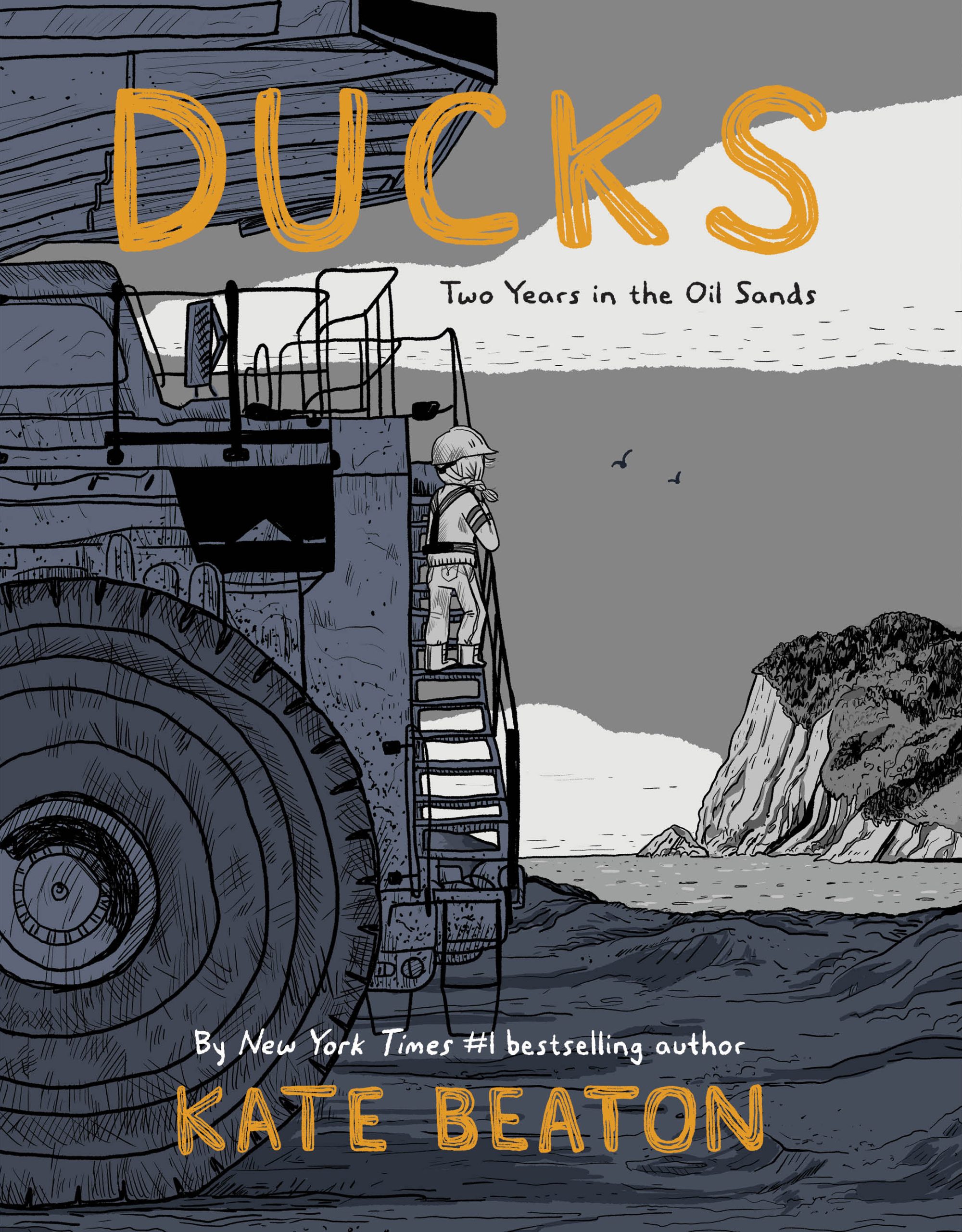 $39.95
In stores
50831
PRAISESPECSEVENTSPRESSAWARDS
“An exceptionally beautiful book about loneliness, labor, and survival. Beaton is a thoughtful guide through a complex landscape of class and gender, and these pages ache with grief and grace.”—Carmen Maria Machado, author of In the Dream House

“A masterpiece, a heartbreak, a nightlight shining in the dark.”—Patricia Lockwood, author of No One Is Talking About This

“Ducks is both a coming-of-age narrative and a skillful, subtle commentary on class, misogyny, and the human costs of environmental extraction. From the oil fields to the hallways of worker housing, Kate Beaton’s comics are rich with quiet revelations, intimate details, and a deadpan, devastating sense of humor. A generous and illuminating book; I suspect it will stay on my mind for a very long time.”—Anna Wiener, author of Uncanny Valley

“In Ducks, Kate Beaton doesn’t tell us how capitalism extracts, exploits, commodifies, and alienates. Nor does she show us. She recreates life in an oil sands mining operation in granular detail and allows us to make the connections ourselves—as she had to when she showed up to work there at age twenty-one. The effect is devastating. Despite the brutal toll Beaton suffered personally, she has woven from her experience a vast and complex tapestry that captures the humanity of people doing a kind of “dirty work” in which we are all complicit, and it shimmers with grace.”—Alison Bechdel, author of Fun Home

“Ducks is an unforgettable, riveting work. Kate Beaton opens the mind’s eye, allowing us to inhabit landscapes and experiences crucial to our time, yet largely unseen. Artful, considered and courageous, Ducks is a landmark work."—Madeleine Thien, author of the Giller and Governor General’s Literary Award-winning Do Not Say We Have Nothing

“Ducks delivers an immersive, harrowing journey through an industry where the lure of fast money belies darker realities of casual brutality, profound loneliness and soul-cracking isolation. The uneasy echoes of Beaton’s story ring well past the the final page. Shattering.”—Jessica Bruder, author of Nomadland: Surviving America in the Twenty-First Century

“Katie Beaton’s graphic memoir about working in the oil sands of Alberta shares an experience that feels both alien and universal, desperate and yet somehow hopeful. Frame by frame, it weaves together a complex tale about capitalism, environmental degradation, misogyny, indigenous rights, and the lengths that some people have to go to for a fighting chance at a good life. Honest, compassionate, and clear-eyed, Ducks is a stunning achievement in storytelling that I will be thinking about for a long time.”—Jung Yun, author of O Beautiful

“Fans of Kate Beaton's comic series Hark! A Vagrant already know she has a brilliant, odd-angled wit and a deft touch with telling detail. In Ducks, she reveals that she also has a novelist's skill with pacing, character and tone. Beaton's graphic memoir of her time working in the oil patch is a vital and revelatory Canadian story, vividly told. The staggering scope of the industry and its notoriously harsh impact on the landscape of northern Alberta provide a loud, lurid backdrop. But this is fundamentally a deeply personal story, and Beaton unveils her experiences in this tough and relentlessly misogynistic work environment with a fair but unflinching eye, telling hard truths about the very mixed blessings of living and working in a boomtown.”—Chris Turner, author of The Patch: The People, Pipelines, and Politics of the Oil Sands

“It may be a memoir, but the issues which leap off Ducks’ pages are universal. The difficulty of leaving home, the harsh slog of capitalism, the choking fog of misogyny, the looming threat of environmental disaster — Beaton’s story is eminently relatable, and beautifully told.”—Justin Ling, author of Missing from the Village: The Story of Serial Killer Bruce McArthur, the Search for Justice, and the System That Failed Toronto's Queer Community

"Beaton delivers a masterpiece graphic memoir... [that] makes a shattering statement on the costs of ignorance and neglect endemic in the fuel industry, in both powerful discussions of its sociopolitical ramifications and her own keenly observed personal story."—Publishers Weekly, Starred Review

"Beaton creates an indelible portrait of environmental degradation, fraught interpersonal relationships among a workforce largely disconnected from home, and greedy corporations that seem only vaguely aware of the difficult work’s effect on their employees. [Ducks is] a fascinating, harrowing, unforgettable book about a place few outsiders can comprehend."—Kirkus, Starred Review

"This is graphic memoir at its finest."—Booklist, Starred Review

A masterpiece, a heartbreak, a nightlight shining in the dark.

Patricia Lockwood, author of No One Is Talking About This

Humans have sought to express themselves through the juxtaposition of text and sequential imagery since the invention of...

Ah, summer, when a superhero’s fancy turns to crossover events. But there’s much more to this summer’s comics tha...

Beaton (Hark! A Vagrant) delivers a masterpiece graphic memoir: an immersive, devastating portrait of the two years she ...