Marguerite Abouet was born in Abidjan, Ivory Coast, in 1971. At the age of twelve, she was sent with her older brother to study in France under the care of a great uncle. She lives in Romainville, a suburb of Paris, where she works as a legal assistant and writes novels she has yet to show to publishers. Aya is her first comic. It taps into Abouet’s childhood memories of Ivory Coast in the 1970s, a prosperous, promising time in that country’s history, to tell an unpretentious and gently humorous story of an Africa we rarely see—spirited, hopeful, and resilient.

Clément Oubrerie was born in Paris in 1966. After a stint in art school he spent two years in the United States doing a variety of odd jobs, publishing his first children’s books and serving jail time in New Mexico for working without papers. Back in France, he went on to a prolific career in illustration. With over forty children’s books to his credit, he is also cofounder of the 3D animation studio Station OMD. A drummer in a funk band in his spare time, he still travels frequently, especially to the Ivory Coast. In Aya, his first comic, Oubrerie’s warm colors and energetic, playful line connect expressively with Marguerite Abouet’s vibrant writing. 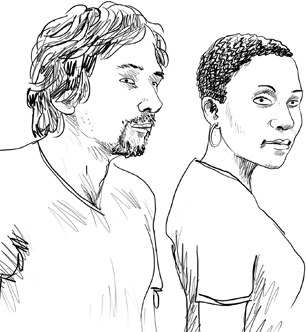 Aya series is sharing an important part of African history

Writers like Ivorian Marguerite Abouet have been long been passionate about doing this. Abouet’s Aya of Yop Ci...

ROLLING BLACKOUTS: DISPATCHES FROM TURKEY, SYRIA, AND IRAQ BY SARAH GLIDDEN Traveling around the Middle East with two jo...

“Aya: Life in Yop City” by Marguerite Abouet and Clément Oubrerie In this warmly energetic semi-autobiograp...

D+Q Exhibiting at ALA Annual

We’re very excited to be exhibiting at the American Library Association’s annual conference this coming June 23, 24, 25 and 26…

Next month we will be publishing the graphic novel AYA by Marguerite Abouet and Clement Oubrerie, the first three trade reviews…