Gilbert Hernandez was born in 1957 in Oxnard, California, a middle child in a family of six children. Alongside his brothers Jaime and Mario, Gilbert co-created and contributed to the acclaimed comic book series Love and Rockets, which celebrated its 30th anniversary in 2012.

Gilbert has won numerous awards for his stories, including the Kirby Award, Inkpot Award, Harvey Award, and the 2009 United States Artists Literature Fellowship. Gilbert, along with his brothers, is considered to have ushered in the contemporary generation of alternative comics, with Love and Rockets setting the groundwork in the early 1980s for later work by peers such as Daniel Clowes, Peter Bagge, and Chester Brown. Love & Rockets is known for its focus on female characters, for being influenced by punk rock, and for its realistic story lines that have continued for the past three decades.

Hernandez is best known for his Palomar stories, following a fictional Central American town and its residents, and first serialized in Love and Rockets. These stories were collected in Heartbreak Soup, Human Diastrophism, and Beyond Palomar. Gilbert has also published a series of stand-alone graphic novels about some of Palomar’s residents, including Love From the Shadows, High Soft Lisp, and The Troublemakers. The Lynchian masterpiece Sloth received widespread attention within and outside the field of alternative comics.

Gilbert currently resides in Las Vegas with his wife and daughter. 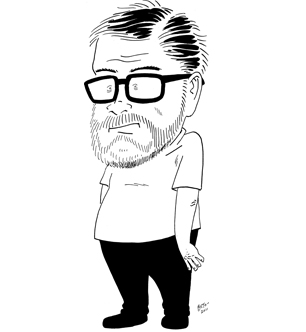 Nominated for Great Graphic Novel for Teens for Marble Season

Outstanding Body of Work in Graphic Literature for Marble Season

Special Contribution to the World Of Comics for Gilbert Hernandez

Bumperhead, the new graphic novel by Gilbert Hernandez of Love And Rockets fame, is an insightful character study of a m...

Bumperhead from Drawn & Quarterly is an exploration of life, music, and relationships by Gilbert...

Gilbert Hernandez and his brothers launched the alternative comics era with their epoch-defining series Love and Rockets...

Drawn & Quarterly will be celebrating our 25th anniversary at San Diego Comic-Con International, and we’ll have Jillian Tamaki, Michael DeForge,…

CAKE is this weekend: Jillian Tamaki and more!

Hello, Chicago! I thought for a while about CAKE jokes and puns I could use in this post, but decided I’d…