Daniel Clowes is the acclaimed cartoonist of the seminal comic book series Eightball and the graphic novels Ghost World, David Boring, Ice Haven, Wilson, Mr. Wonderful, and The Death-Ray. He is the subject of the monograph The Art of Daniel Clowes: Modern Cartoonist, published in conjunction with a major retrospective at the Oakland Museum of California and the Museum of Contemporary Art in Chicago.

He is an Oscar-nominated screenwriter, the recipient of numerous awards including the PEN Award for literature, Eisner, Harvey, and Ignatz, and a frequent cover artist for the New Yorker. He is married and lives in Oakland, CA. 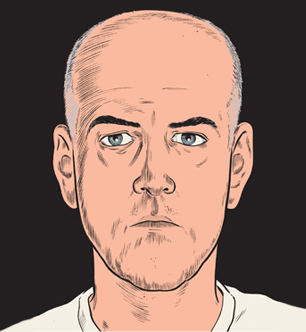 Best Graphic Album of Previously Published Work for The Death-Ray

Nominated for Best Single Issue or Story for Wilson (Paperback)

Outstanding Body of Work in Graphic Literature for Wilson (Paperback)

Along the Lines: Selected Drawings by Saul Steinberg

WILSON in theatres on March 24th!

You could, this summer, should the mood strike you, travel to three Chicago museums, visit three exhibits on comic books...

Chicago Comics: From the 1960s to the present A deep dive into the 60-year-old graffiti craftsmen, this exhibit looks at...

The work of Lynda Barry, Daniel Clowes and Kerry James Marshall will go on display this summer. After reopening briefly...

Nerdist: A Talk With Daniel Clowes On “Hero Complex”

Dan Clowes From back in the Day!

From back when Mr. Clowes had a full head of hair and people got their news from the TV. Young Clowes and Terry Zwigof...

Wilson is in stores now! Win a copy

In honour of Clowes’s brilliant creation, and to get you folks excited about the movie release later this month, we’re having…

The Trailer for WILSON has arrived!

Fox Searchlight has released the official trailer for the film adaption of the Daniel Clowes graphic novel Wilson! Watch now and…