Chester Brown is best known for his two recent non-fiction graphic novels, Louis Riel: A Comic-Strip Biography (2003) and Paying for It: A Comic-Strip Memoir About Being a John (2011). The former won widespread critical acclaim for its compelling, meticulously researched portrayal of Riel, the charismatic nineteenth century Métis leader, a crucial figure in Canadian history. The book won Harvey Awards for Best Writer and Best Graphic Album and was featured on Quill and Quire's list of the five best Canadian non-fiction books of the year and on The Globe and Mail's list of the 100 best books of the year. Brown's next graphic novel, the controversial Paying for It, was also cited by The Globe and Mail as one of the best books of the year. An autobiographical recounting of Brown's experiences paying prostitutes for sex, it won both praise and condemnation. The book was endorsed by significant figures in the sex worker rights movement, including Tracy Quan, Annie Sprinkle, and Maggie McNeill, bolstering its standing as a polemic that addresses important issues regarding sex work. Brown was born in Montreal, Canada, on May 16, 1960, and grew up in the nearby suburb of Chateauguay. At nineteen he moved to Toronto where, in 1983, he began self-publishing his work in photocopied mini-comics under the title Yummy Fur. Those pamphlets attracted the attention of comic book publishers and, in 1986, he began began writing and drawing for the Toronto based Vortex Comics. The first Vortex issue of Yummy Fur sold well and Brown quit his day job and began working full time as a cartoonist. In the pages of Yummy Fur he serialized a bleaky humorous story called Ed the Happy Clown, which was published as a graphic novel in 1989. It went on to become a cult classic and established his reputation as a prominent creator. In 1991, Chris Oliveros' new comic book company Drawn & Quarterly signed Brown to a contract. His The Playboy was released the next year and was the first graphic novel Drawn & Quarterly published. That was followed by I Never Liked You (1994), an elegant, widely respected memoir about his adolescence. Four years later, his shorter pieces were collected in The Little Man: Short Strips, 1980 - 1995, which demonstrates his range as a storyteller. It moves from his early surrealism to his later autobiographical work. During the course of his research for Louis Riel, Brown became interested in property rights and libertarianism. In the 2008 and 2011 federal elections,  he ran for Parliament as a member of the Libertarian Party of Canada in the downtown Toronto riding of Trinity-Spadina. He lost to incumbent Olivia Chow. 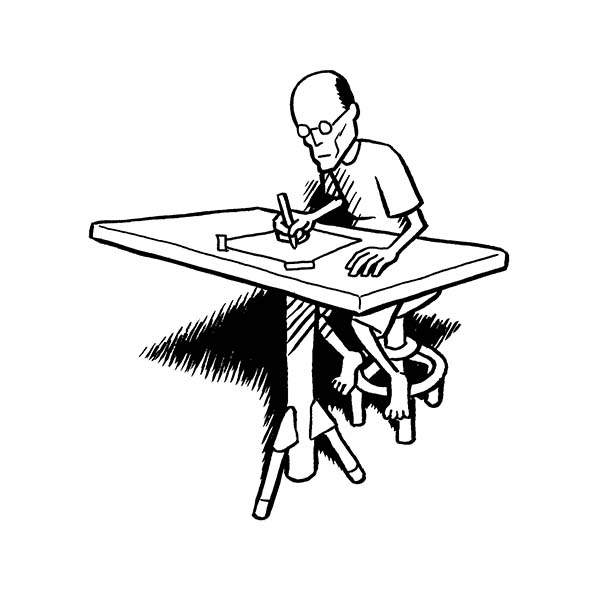 First Prize for Mary Wept Over the Feet of Jesus

Nominated for Best Book for Paying for It

Best Cartoonist (Writer/Artist) for Paying for It

Nominated for Sélection officielle for Paying for It

Canadian Comic Book Creator Hall of Fame for The Playboy

Special Contribution to the World Of Comics for Chester Brown

Nominated for Special Award for Excellence in Presentation

Chester Brown signing at Word on the Street!

CBC: 12 Canadian Books that should be taught in school feat. Louis Riel

We have a very special guest on QCX this week, the amazing & talented Chester Brown! It was really awesome to get th...

Early this morning it was announced that three Drawn & Quarterly authors have been nominated for the Doug Wright Awards! The 13th installation…