Chris Ware was born in Omaha, Nebraska, in 1967, attending The University of Texas at Austin in the late 1980s where he published a regular comic strip in the student newspaper, a habit he was to continue upon moving to Chicago in 1992, producing material that has formed the bulk of his regular periodical, The ACME Novelty Library, since 1994, and that attained its 20th issue with Lint in 2010. Offering both serialized stories and short experiments in comics form, a confusing collection of the same name was issued in hardcover by Pantheon Books in 2005. From the floppier periodical coalesced the graphic novel Jimmy Corrigan—the Smartest Kid on Earth (Pantheon, 2000), which received an American Book Award in 2000, the Guardian First Book Award in 2001, and the extraordinarily obscure French comics award "L'Alph Art" in 2003. Mr. Ware, an occasional contributor to This American Life and a more regular contributor to The New Yorker, was the cartoonist chosen to inaugurate The New York Times Magazine’s “Funny Pages” section in late 2005. In 2004 he guest edited the 13th issue of McSweeney’s Quarterly Concern and was the guest editor of Houghton-Mifflin's Best American Comics 2007. He is currently still at work on the graphic novel Rusty Brown, though his lengthy and expensive graphic novel Building Stories was published in 2012 and was named one of the Top Ten Fiction Books of the Year by The New York Times and Time, as well as the Best Book of the Year by Publishers Weekly; it also won the Lynd Ward award for best graphic novel of the year in 2013.

Mr. Ware’s work has appeared, inexplicably, in the Whitney Biennial of American Art and has been the focus of solo exhibits at the Museum of Contemporary Art Chicago, the Sheldon Memorial Art Gallery in Lincoln, Nebraska, the Gävle Konstcentrum in Sweden, and the Columbus College of Art and Design. He was also awarded a Hoi Fellowship by United States Artists in 2006.

Mr. Ware lives in Oak Park, Illinois, with his wife, Marnie, a high school science teacher who works much harder than he does, and their daughter, Clara. 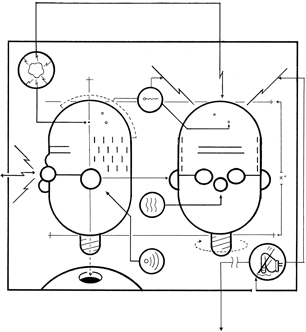 Adrian Tomine and Chris Ware in conversation with Abbi Jacobson

Along the Lines: Selected Drawings by Saul Steinberg

You could, this summer, should the mood strike you, travel to three Chicago museums, visit three exhibits on comic books...

Chicago Comics: From the 1960s to the present A deep dive into the 60-year-old graffiti craftsmen, this exhibit looks at...

Ranking the best book-length comics ever created is a lot like picking out the greatest grains of sand on the beach: you...

From his home and studio in Oak Park, Illinois, artist Chris Ware shares motivations and challenges for telling stories ...

For the first time two of the world's best graphic novelists, Joe Sacco and Chris Ware, appeared together on stage to di...

Chris Ware covers the May 2015 issue of Juxtapoz, now on newsstands everywhere! Be sure to read the magazine’s special ‘Beyond…